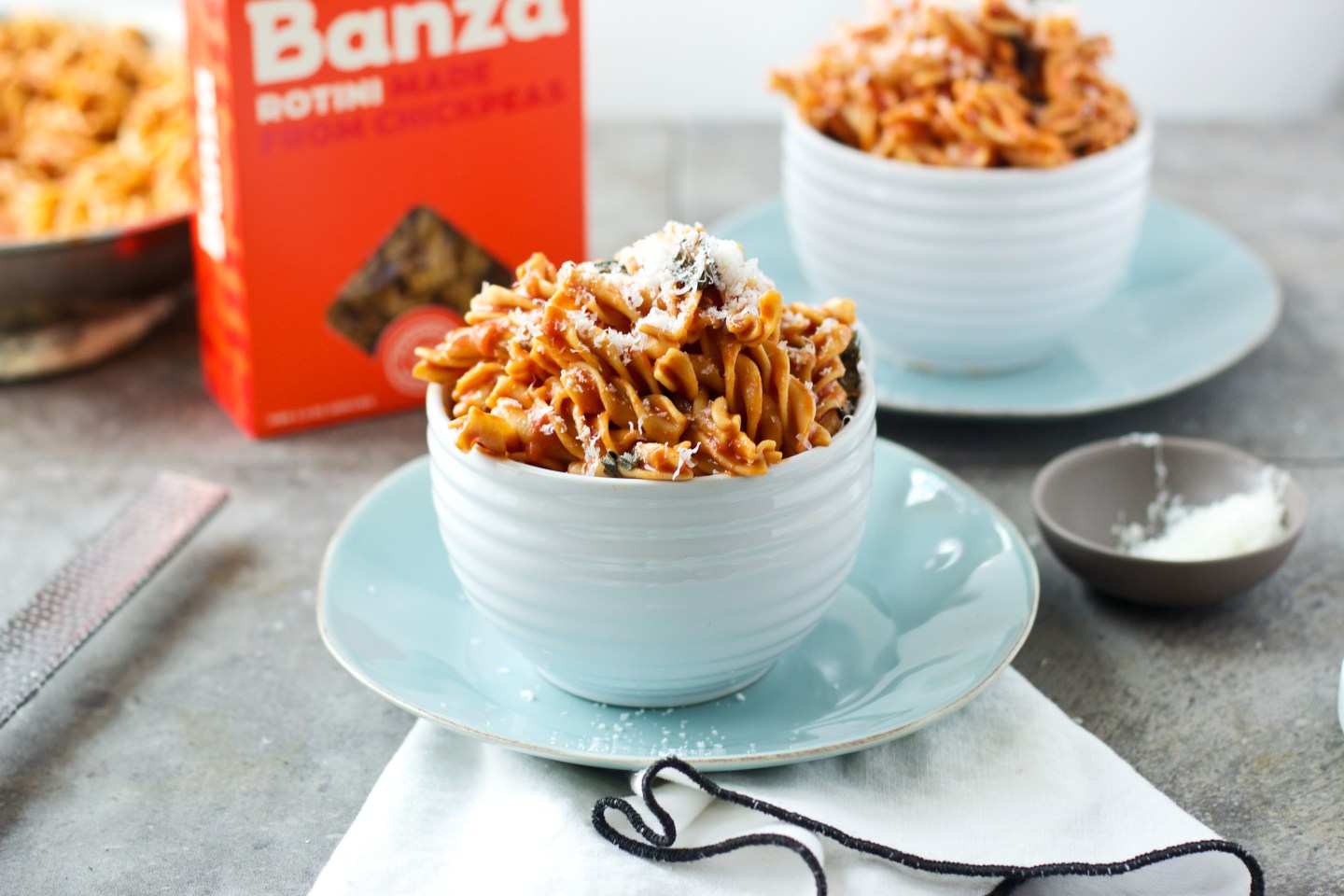 It was 2014, and Scott Rudolph was making good money. Having worked his way up the Wall Street food chain, he’d landed a job in private equity. Not only was he well-positioned for professional success, but he had married his college sweetheart and settled into a comfortable life in New York City. His future looked bright, if predictable.

Instead of continuing down the expected corporate path, however, he changed course thanks to his younger brother, Brian.

Brian’s career path was very different from Scott’s. For years, he spent his days working as a product manager at a tech company and his nights trying to develop a healthier type of pasta. Through trial-and-error in his Detroit kitchen, he eventually invented Banza, a pasta made from chickpeas that packs double the protein, four times the fiber and nearly half the net carbs of traditional pasta.

When Brian’s prototypes improved to the point where they appealed to a large segment of friends and family, Scott decided it was time to quit his job to join his brother’s fledgling company. Plenty of people told him he was crazy to trade corporate life for chickpea pasta, but he was convinced the product filled a gap in the market. Since then, it’s been a whirlwind. Banza is now available in over 2,000 retail stores and was named one of the Top 25 Inventions of 2015 by TIME. The company would not reveal its sales figures.

Meanwhile, Scott had already grown comfortable with the concept of full-time entrepreneurship thanks to his experience working on a venture part-time. At the same time, his brothers prototypes improved to the point that they were appealing to larger and larger audiences of friends and family.

Despite having a lot to lose professionally and financially, Scott didn’t lose much sleep over the decision. He credits his experience as a part-time entrepreneur for giving him the conviction to join Banza. Two years earlier, he’d invested in a startup called Vero Water that enables restaurants to bottle premium branded water on site. In addition to providing capital, he’d spent nights and weekends working alongside the firm’s management team. In the process, he learned what it would take to build a new venture.

Here are three critical insights he picked up from the experience that allowed him to transition from corporate life to the startup world.

1. Know what you’re getting yourself into

Even on a part-time basis, Scott quickly learned that working at a startup is very different from managing billions in capital. In private equity, his calls were always returned and he enjoyed endless administrative and intellectual support. At Vero, he was an unknown who did his own grunt work and spent his free time visiting restaurants to convince them to take his product seriously. Given this experience, when he joined Banza he had the tools and the mindset to approach retailers directly. Today, Banza is sold at Whole Foods, Wegmans, HEB, Fairway and Target.

2. Be as objective as possible

From the outset, Scott resolved he wasn’t going to leave a lucrative job without evidence that the venture would pay off. When he joined Banza, the company was in the process of raising seed capital via a crowdfunding campaign and was appearance on the reality show Restaurant Startup, it was slated to get some well-timed exposure. Given this momentum, he could already trace a realistic path to building a profitable company. He also knew he’d have a lot more fun along the way.

3. Play to your strengths

From the outset Scott knew that his brother, not him, would be the one responsible for product innovation, connecting with consumers and building the Banza brand. That suited him just fine. He was happy to focus on the areas that leveraged his finance skills, including analytics and operations. Acknowledging that each of them had complementary skills made it far easier to build a functioning organization.

Two years later, the Rudolph brothers are winning over clients one plate of Banza at a time. Although Scott always imagined that he could fall back on his Wall Street experience and head back up to Park Avenue, he hasn’t needed — or wanted – to do so. So far, his foray into chickpea pasta has exceeded his expectations.