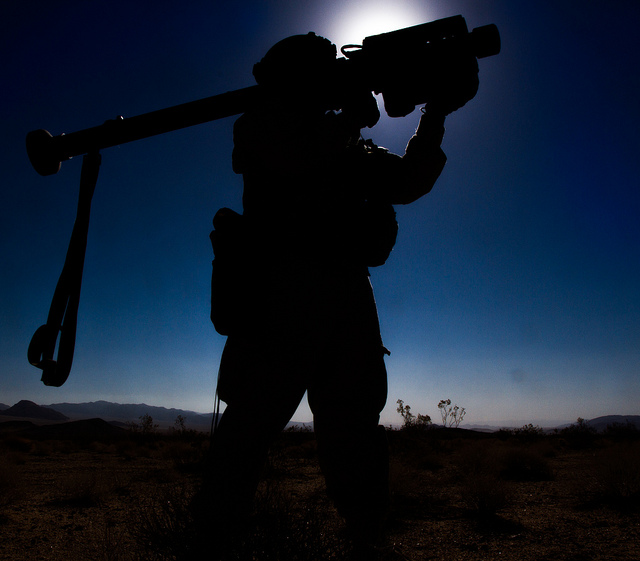 As the Syrian cease-fire unravels, U.S. officials have indicated that they may be willing to provide Syrian rebel groups with the kind of sophisticated, shoulder-fired anti-aircraft weaponry that just might turn the tide in the five-year-old conflict. But it will do so if, and only if, those weapons include a safety mechanism that restricts where and when they can be used, Foreign Policy reports.

Syrian rebel groups have long clamored for shoulder-fired anti-aircraft weapons—known as “man-portable air defense systems, or MANPADS for short—that could blunt the devastating toll Russian and Syrian regime fighter jets and helicopters are taking on rebel forces. But MANPADS don’t distinguish between military and civilian aircraft, raising fears that such weapons could fall into the hands of extremist groups that could use the weapons to target civilian airliners or other aircraft outside of the Syrian conflict zone.

Getting the right technology into moderate rebels’ hands while limiting the proliferation of dangerous weaponry represents exactly the kind of engineering problem that has spurred the U.S. defense and intelligence communities to cozy up to Silicon Valley in recent months. For the idea to work, the CIA will need to quickly develop and deploy some kind of anti-aircraft system that it can both turn over to an outside group and still control somewhat by restricting where it can be used, when it can be used, or both.

No missile with such technical controls currently exists, at least not publicly, and building one that is both effective and safe to turn over to Syrian rebel groups presents major technological challenges.

One potential solution would be to create a system that triangulates its position via GPS, rendering itself inert when outside of a preprogrammed geographic area. But doing so could render the weapons ineffective in combat. The batteries that power MANPADS typically provide very short bursts of power, often less than two minutes. The time it takes to interact with satellites to establish GPS could deplete the batteries, not to mention erode one of the primary advantages of having MANPADS in the first place: the ability to dispatch a threat that typically approaches very, very quickly.

Another approach would involve modifying the batteries themselves, ensuring that they no longer function after a certain period of time. Other solutions are more obvious—like designing a launcher that could only be operated by a user that punches in a PIN code—but also have obvious drawbacks (PIN numbers are easily lost, transferred, etc.). Meanwhile, any one of these solutions could be vulnerable to physical or digital hacking once the hardware is out of U.S. hands.

For more about Syria, watch:

If it feels like you’ve seen this movie before, it’s because you have. Following the Soviet invasion of Afghanistan in the 1980s the CIA armed the ant-Soviet mujahedeen with U.S.-made shoulder-launched Stinger anti-aircraft missiles. Armed with the MANPADS, the mujahedeen began regularly shooting down the formidable Soviet attack helicopters and fighter jets that had previously hunted them with impunity, inflicting losses that contributed to the Soviet’s eventual withdrawal.

But after spending the 1980s supplying MANPADS to Afghan and Pakistani mujahedeen fighters, the CIA then spent the 1990s trying to get them all back. Hundreds of unused anti-aircraft weapons still circulated among the various groups that splintered from the mujahedeen, including the Afghan Taliban. Dozens of civilian airliners have been targeted by MANPADS since the 1970s, adding to U.S. reluctance to release any more of the systems into the wild without some kind of technical control that would limit their use to the current conflict, and only the current conflict.

The plan to arm Syrian rebels with such weapons is part of the Pentagon’s so-called “Plan B,” a contingency that calls for supplying more and more-powerful weapons to moderate Syrian rebels in the event the tenuous cease-fire breaks down (it has). The CIA has remained characteristically silent about any potential technologies it has in the works or any companies it may be working with to create a new breed of conflict-specific anti-aircraft weapons. The White House will have to approve any list of specific Plan B weaponry that ends up in the hands of Syrian rebel groups.