Why the U.S. Is About to Sell Billions in Boeing Fighter Jets to Qatar 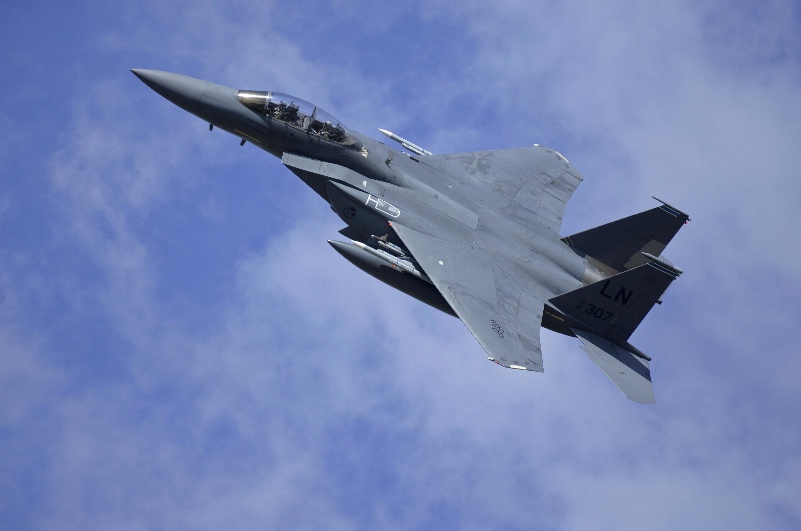 When President Obama meets with a number of America’s Persian Gulf allies this week in Saudi Arabia, he won’t show up empty-handed. Reuters reports that the Obama administration is poised to finally approve two long-delayed multibillion sales of Boeing (BA) fighter jets to Qatar and Kuwait, and that the announcement could come this week during the President’s visit to the region.

This bit of fighter jet diplomacy could help bring an increasingly distant Gulf Cooperation Council (GCC) a little bit closer to Washington, as well as offer a significant boost to Boeing’s flagging fighter jet business. But the deals themselves also reflect a fragmenting military relationship between the United States and its traditional Gulf allies—a fraying of ties that could have impacts across the defense industry.

Both the Pentagon and State Department have signed off on the separate deals, which would send 36 Boeing F-15E Strike Eagle fighter jets to Qatar and 24 Boeing F/A-18E/F Super Hornets to Kuwait. The Qatari sale is worth roughly $4 billion, the Kuwaiti deal around $3 billion. Both offers have been on the table for more than two years awaiting final approval from the White House, whose indecision has drawn criticism from industry, the U.S. military, and Congress as both countries have shopped for air power elsewhere in the interim.

But even as President Obama meets with Gulf allies today and tomorrow, the long-awaited fighter jet deals continue to stir controversy—particularly the deal with Qatar.

Qatar wants the F-15s to anchor a growing air force currently made up of just a dozen aging French Mirage jets. Alongside a deal to purchase two dozen Rafale fighter jets (made by France’s Dassault Aviation (DUAVF)) signed in late March, the 36 F-15s would transform Qatar into a far more serious air power within the region and—alongside GCC allies like Saudi Arabia—a legitimate foil to a resurgent Iranian air force.

But its ties to known terrorist organizations like the Taliban and Hamas have made Qatar both a valuable middleman in the region and, at times, an unreliable friend. The country has served as a broker in negotiations that have returned Western hostages held abroad by Syrian rebel groups or the Taliban, including captured U.S. Army Sgt. Bowe Bergdahl. It has also looked the other way while Qatari financiers funneled money to militant groups in Syria and elsewhere.

Publicly the U.S. government has rebuked Qatar multiple times in recent years over its refusal to take a harder line against terrorist financing. Yet Qatar is home to an important U.S. air base, the lease for which the U.S. extended for another decade in 2013. A year later, the U.S. agreed to sell Qatar $11 billion worth of Patriot missiles, attack helicopters, and other military equipment.

In the middle of this complex relationship lay the fighter jets—as well as an increasingly nervous Israel, which has privately pushed back against the F-15 deal out of concern it would erode its own military superiority in the region.

“Qatar is far more complicated,” says Richard Aboulafia, vice president for analysis at defense consultancy Teal Group. “It’s not just Israel, but other people who have mixed feelings about giving a large number of high-end fighter jets to a country that has no problem playing on both sides of the street.”

U.S. Sold $33 Billion in Weapons to Gulf Countries in the Last Year

Nonetheless, in what could be the last major move in defense diplomacy before the U.S. presidential election in November, Qatar appears poised to get its F-15s. Kuwait is also likely to get the greenlight for its less politically controversial purchase of 24 F/A-18 fighter aircraft. Citing sources inside the administration, Reuters reports that the deals could be announced during President Obama’s visit to Saudi Arabia this week, a move that would serve to pull those Gulf allies into a closer military relationship with Washington at a time when relations are increasingly strained over America’s warming stance toward Iran.

Finalizing the deals would mark a huge boost for Boeing and the St. Louis-based assembly lines that produce both jets. Without further orders, both production lines are slated to close by the end of the decade. While the U.S. Navy has asked Congress for additional funds to purchase more F/A-18 Super Hornets in the 2017 budget, the F-15 is in a more precarious position. Without a new customer, that line would close in 2019 after filling a large order for Saudi Arabia.

Completing both deals with Qatar and Kuwait would extend the life of both production lines into the 2020s. It would also allow Boeing more time to negotiate additional deals with both foreign customers and the U.S. Navy, which may order additional F/A-18 Super Hornets and E/A-18 Growlers—the electronic warfare variant of the Super Hornet—in future defense budgets. That’s significant, considering the F-15 and F/A-18 are Boeing’s last footholds in the fighter jet business as its existing jets are phased out to make room for Lockheed Martin’s (LMT) new F-35 Joint Strike Fighter.

But while the deals will make life easier for Boeing they also represent a more complicated strategic relationship emerging between the U.S. and its traditional Middle Eastern allies, one that could impact future U.S. defense deals in the region.

When countries transact in complex weapons systems like fighter jets, they aren’t just trading cash for hardware. The recipient will require spare parts, maintenance assistance, and training from the seller nation—not to mention the weapons that make each aircraft effective—over the three-decade-plus lifetime of the aircraft. When the U.S. sells extremely capable fighter jets like the F-15 to another nation, it is establishing a long-term relationship and signaling trust. The recipient in turn makes itself dependent on U.S. industry and arms exports for years to come.

In other words, fighter jet diplomacy is about security, but it’s also about relationships, and those relationships appear to be fraying. Following the ousting of former president Mohamed Morsi by the Egyptian military in 2013, the U.S. suspended its annual $1 billion military aid package to that country—traditionally one of America’s most dependable arms customers. Egypt responded by purchasing two-dozen French Rafale fighter jets rather than U.S.-built aircraft as in the past. In the last month, both Qatar and Kuwait— though still interested in U.S. fighter aircraft—have also inked deals to purchase dozens of Rafales and Eurofighter Typhoon jets from European sources.

Meanwhile, just last week two senators introduced legislation that would restrict the free flow of munitions to Saudi Arabia—another one of the U.S. defense industry’s most loyal customers—over mounting civilian casualties caused by Saudi air strikes in Yemen. Even if the legislation is never signed into law, the message is clear. And it could prompt Saudi Arabia to diversify the means by which it sources weapons as well.

Selling American fighter jets to Qatar and Kuwait—if the deals are indeed finalized this week—could help restore the strained U.S.-GCC security relationship. But none of the countries involved, it seems, enjoy the same degree of confidence in the once-solid security relationship between the U.S. and its Gulf allies as they used to.