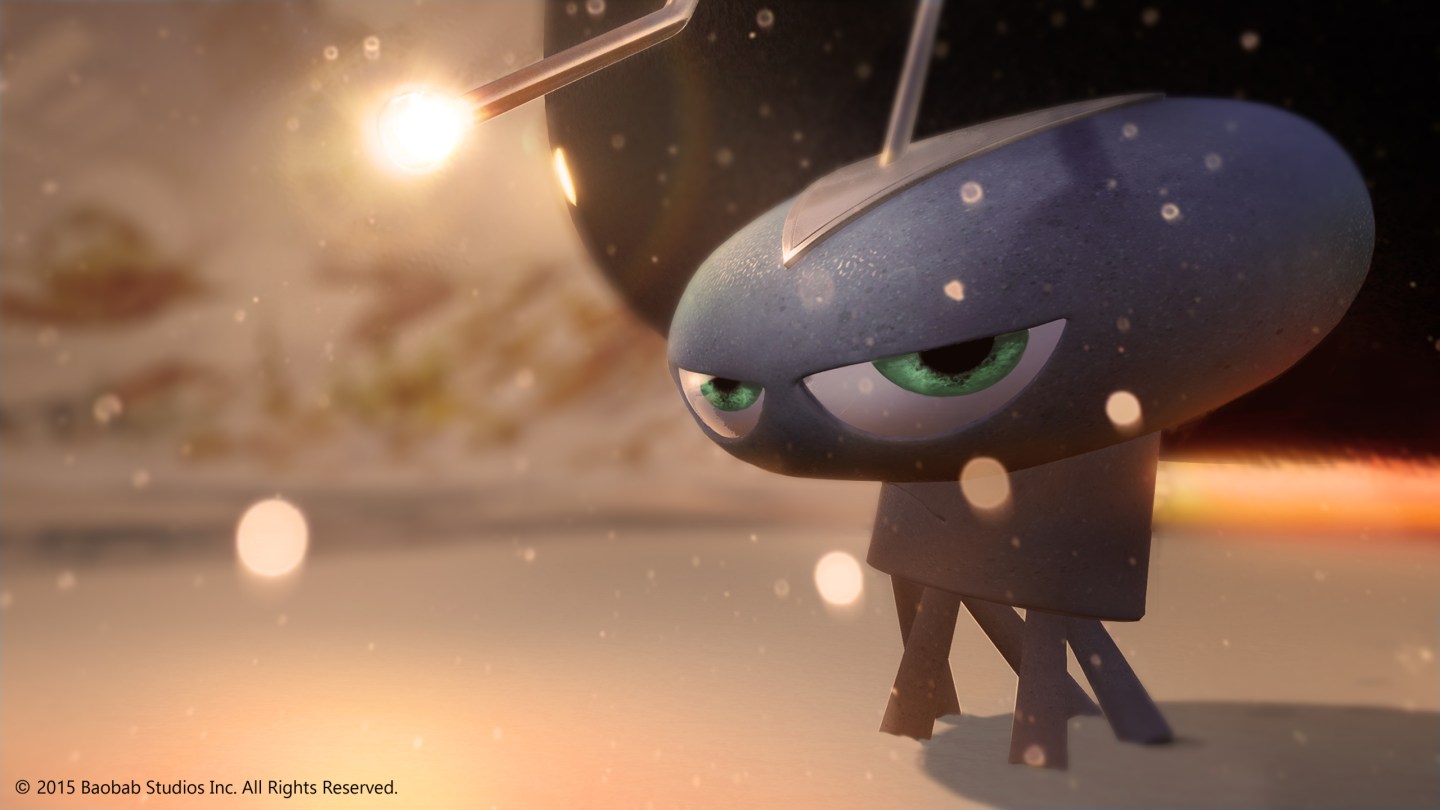 Is virtual reality having a moment?

A lot of people feel it is passing some sort of milestone. This year, the 15th Tribeca Film Festival is featuring the debut of unusual set of films, all exclusively in virtual reality. “Tribeca Film Festival recognizes the power of VR to change storytelling,” says Maureen Fan, CEO of Baobab Studios, whose VR film Invasion! is at the festival. “They have a megaphone to show the world how powerful VR is and they’re bringing together some of the best VR experiences under one roof.”

On April 16, Baobab Studios is premiering Invasion! exclusively in virtual reality on Oculus Rift, HTC Vive, and Samsung Gear VR. Just under seven minutes, the computer-animated film is told from the perspective of a cute white bunny, who is out to save the Earth from destruction by invading aliens. Ethan Hawke narrates.

Baobab Studios is filled with former Hollywood studio and games makers, who worked at Pixar, DreamWorks Animation, and Zynga.. Co-founder Fan previously served as vice president of games at Zynga where she oversaw the FarmVille sequels, and co-founder Eric Darnell is a former DreamWorks Animation creative who wrote and directed all four Madagascar films.

Baobab raised $6 million to fund Invasion! and other projects, while also building out a brand new development pipeline for virtual reality storytelling. Fan says its costs more to develop in VR than traditional animation because the team had to create all the tools and software from scratch.

“There’s a lot more creative iteration since we’re inventing a new cinematic language, which costs more,” Fan says, adding, “Since the audience can look anywhere in VR, you have to build the entire world.”

Fan notes that many of these costs will inevitably decrease as technology advances, but creative iteration will continue to cost more.

Darnell says these early days of virtual reality remind him of working in computer animation in the ‘90s, “when no one really knew what they were doing,” says Darnell. He directed DreamWorks Animation’s very first computer-animation feature, Antz, back in 1998. “VR feels a lot like those good old days. There is so much to discover. It’s like the wild west.”

When wearing a headset, viewers can look in any direction at any time. This opens up new challenges for storytelling, since the user is an active participant in the action. To grab the viewer’s attention, Baobab Studios turned to a fundamental principle of a very old entertainment form – magic.

Fan says, ultimately the marriage of animation and virtual reality is a perfect match.

“Animation is about taking you to completely different worlds and making you feel that the world is so real that you can reach out and touch it,” Fan says. “That is the definition of VR. Animation and VR were made for each other. Animation brings out people’s wonder. That’s our mission, to bring out people’s sense of wonder.”

Invasion! is currently available for free on Facebook’s $599 Oculus Rift and Samsung’s $99 Gear VR. Fan says the company is platform agnostic, and after the Tribeca premiere, it will be available across all virtual reality platforms, including HTC Vive, Google Cardboard, Hulu VR, and later Sony’s PlayStation VR.

Digi-Capital managing director Tim Merel says that while the 360-degree video market is in its early stage today, virtual reality video could grow to the $5 billion to $10 billion revenue range by 2020.

Fan says fans could see more of these characters in the future.

“Based on the reception to just the trailer on Samsung Milk VR, we know there’s heat around this universe and concept,” Fan says. ” Our studio aspires to create characters you fall in love with and stories that enchant you. If audiences want more of these characters, then we want to give it to them.”