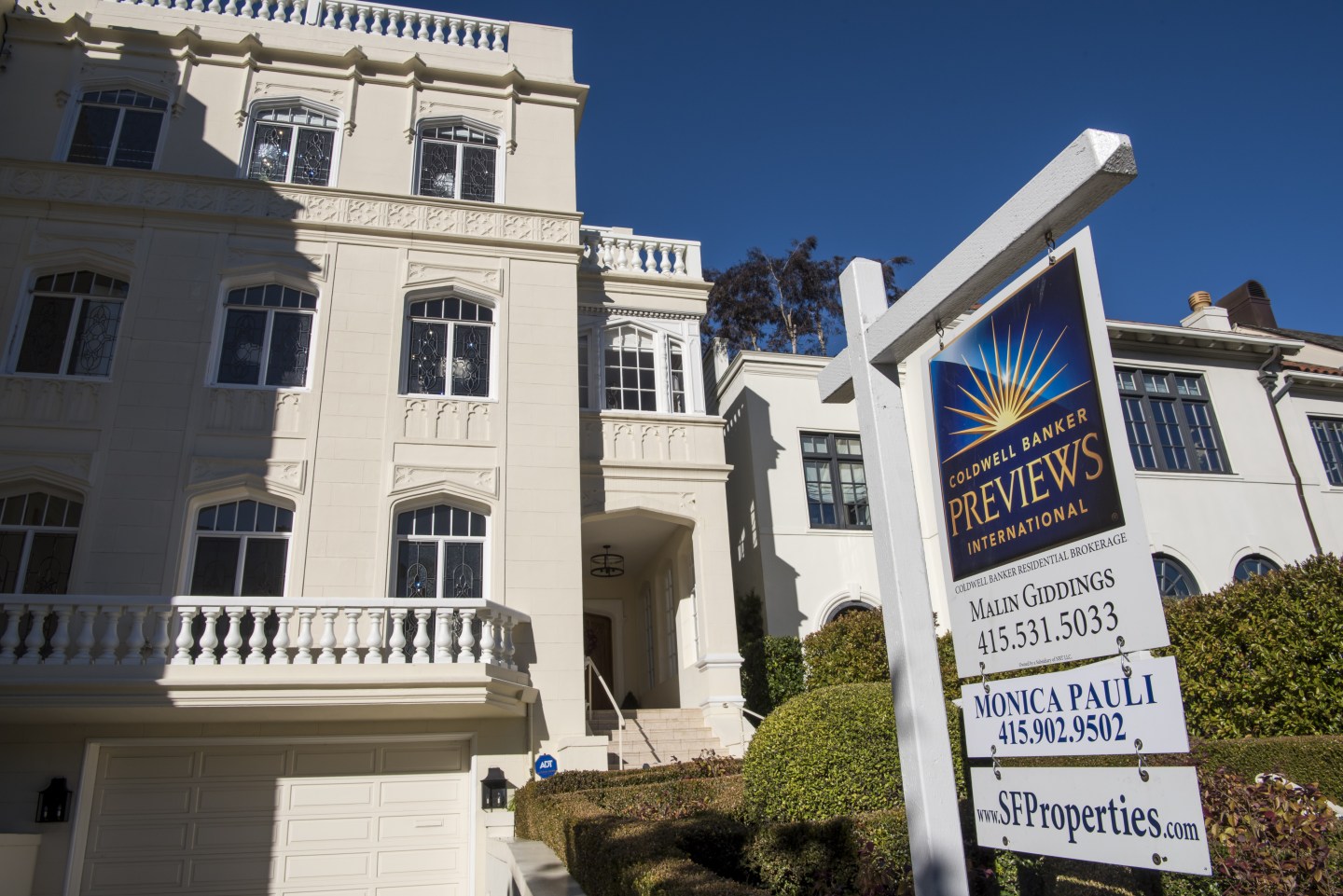 A "For Sale" sign stands in front of a home in San Francisco, California, U.S., on Tuesday, Dec. 29, 2015. Home values in 20 U.S. cities rose at a faster pace in the year ended October as lean inventories of available properties combined with steadily improving demand. Photographer: David Paul Morris/Bloomberg via Getty Images
Photography by Bloomberg Bloomberg via Getty Images

With new homes being advertised as starting in the low millions, a 110-year-old decomposing wood shack listing for $350,000, and a desperate designer paying $508 a month to live in a box in someone else’s apartment, San Francisco has been the poster city for real estate prices unchecked. Tech money has fueled a demand for space that has pushed prices to the highest in the country.

But things may be taking a turn toward sanity. According to online real estate brokerage Redfin, the median sales price of a house in San Francisco fell between March 2015 and March 2016. That was the first year-over-year drop since 2012. The median final sales price of a home, which had jumped by 15% throughout 2015, dropped 1.8% to $1,042,500 in March, compared to the same time last year. The number of homes sold dropped by 22.1%, showing that fewer people bought homes this March than in the same period in 2015, suggesting that demand is slowing.

Nationally, the median sale price of homes rose 4.7% in March. In some cities, sales prices are skyrocketing. At 23.4%, Boston had the biggest year-over-year growth in the price of homes sold.

Redfin isn’t the only one to see a big shift in the Bay Area. Zillow’s figures show a February year-over-year drop of 7.4% in the median sale price of a house. Just between January 2016 and February 2016 the median sales price went from $1.14 million to $991,000, a 13% decline. (Zillow doesn’t display March data at this time.)

Paragon Real Estate Group noted that while many condominium units were at top prices, decline is dropping, and more listings are failing to get offers.

According to Redfin Chief Economist Nela Richardson, as quoted on the company’s site, 77% of housing offers in San Francisco faced competing bids in March 2016. The previous year the number was 94%.

“This suggests that the price drop is not about inventory, it’s about buyers fed up with high Bay Area prices and crazy competition,” Richardson said.

But it will take additional data over the next few months to see if this is a trend or an aberration. Redfin noted that the Easter holidays typically slow home-buying activity. With the early appearance this year, it may be that some sales were pushed out into April.

However, even with continued downward pressure, it would take far more to make San Francisco affordable. In March, 77.5% of homes sold for more than the asking price. Zillow’s estimate for San Francisco rents is $4,426 a month, including both apartments and houses.

Not that the continued premium rents are good news for Peter Berkowitz, the designer living in a box who planned to sell the 32-square-foot units to others that wanted a break in housing costs. San Francisco’s Department of Building Inspection has decided that the pods are illegal and in violation of housing, building, and fire safety codes.