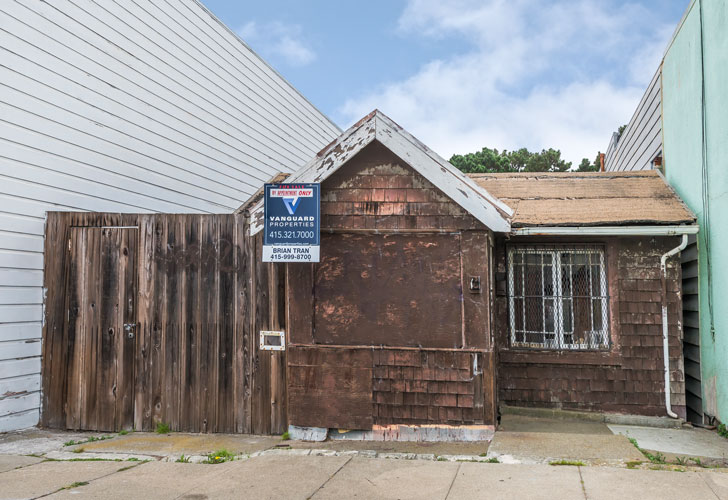 It is a worn-down, decomposing wooden shack that was built in 1906, and the interior is unlivable in its current condition. The San Francisco house is also selling for $350,000.

Located at 16 De Long Street in the (slightly) more affordable Outer Mission district, the house’s price is a reflection of the skyrocketing real estate market in San Francisco. Since 2012, the city has seen a 103% increase in median housing prices; this month, that figure stands at $1.35 million.

According to realtors Brian Tran and Alexander Han, the shack is “the cheapest home listed in San Francisco.”

Originally an earthquake shelter, the shack was built in the aftermath of the devastating 1906 San Francisco earthquake. The 765-square-foot unit caught the attention of Tran and Han during a drive around the neighborhood. Upon spotting the vacant house, they found the owner—who had bought the home in 1984 and had moved out in 2008—and asked if she would be willing to sell it.

“Our job is to look at homes and determine value. This home is really just like any home in that it has so much value despite its appearance,” said Tran. They determined the price in comparison to the neighboring houses; the home is selling for $458 per square foot in an area where the average square foot is $1,066. “To say this home is better than any other home, it’s not.”

With the influx of tech workers driving up the housing market, along with a strain on the supply of houses to meet demand, it is understandable to brokers here why prices seem so unrealistic. “We have some of the best colleges here, it’s a beautiful city, and everyone wants to live here. All thee factors are a big influence in market today,” said Tran.

According to Zillow, $350,000 would comfortably fetch a 1,500-square-foot, three-bedroom home in many smaller cities in the U.S., including Cincinnati, Ohio. But in San Francisco, the listing — along with the media publicity — has drawn some prospective buyers to the place, each with different intentions. “A few people love the idea of keeping the history of the home,” said Han. “Some want to come in and tear it down.”

In both cases, however, Han would definitely advise against moving in too soon. ” The house still needs a lot of work. I would not recommend anyone moving right in. The bathroom is not functioning. The kitchen needs a bit more work. The flooring has a couple of places that are little bit weaker, and needs to be reinforced.”