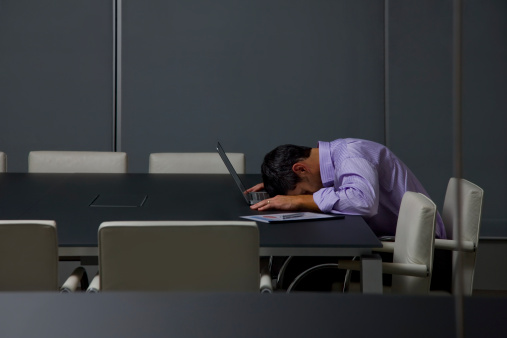 One recent afternoon, as I sat in a crowded coffee shop cursing the Wi–Fi and beating myself up for not getting enough done, I reached my limit. I leaned back, looked away from my screen, and thought, “I don’t want to live like this anymore.”

I was tired of overwhelming to-do lists. Tired of waking up from stressful dreams that left me feeling like I’d worked all night. Tired of skipping breakfast, scarfing down granola bars between meetings, and racing home at night just in time to drive through my favorite fast-food place before it closed. It was time to try something new.

And so in a rash decision, I sent an email to my assistant and said, “Please clear my calendar every morning until noon for the next two weeks. I want to do an experiment.”

My only requirement for this two-week experiment was that I spend each morning on activities that would allow me to relax, recharge, and rest. Like reading The Count of Monte Cristo at my favorite cafe. Kayaking down a river. Even just pacing around my apartment dreaming – like I used to do as a kid.

During these two weeks, work would be limited to the hours between noon and 9 p.m.

I was excited. Admittedly, I was also scared. What would happen if I worked fewer hours given that I was already barely keeping up? What would my friends and mentors think? After all, you have to hustle 24/7 to make it big, right?

My assumption, though, was that having several hours of breathing room every morning to think, dream, and relax would have a counter-intuitive effect and actually make me more productive.

Here’s what happened next:

Day 1: I woke up around 8:30 a.m. and relaxed in bed for a while. Reaching for my phone, I dreamed up a list of activities to do during my newfound free time. Then I got out of bed, put on sweats and a hat and went for a long walk around the neighborhood. By the time I showered, dressed, and made myself a smoothie, it was noon.

Day 2: Despite setting my alarm for 7 a.m, I slept until 10 a.m. Having watched TV until 3 a.m., I needed the extra sleep. Turns out it’s hard to motivate yourself to go to bed early when you don’t have to work until noon. I made breakfast and read a few pages from The Count of Monte Cristo. Next thing I knew, it was 11:30 a.m., so I rushed through a hot shower and quickly got dressed. Arriving a few minutes late to my 12:30 p.m. lunch meeting, I felt scattered and lazy and spent the next few hours beating myself up for sleeping in so long.

Day 3: I slept in. Again. And I would have slept longer had my phone not rang. Rubbing my eyes and struggling to sit up, I heard myself telling a friend, “Dude, I can’t wait for this experiment to be over.” I left my apartment still half-asleep wearing a wrinkled hoodie and jeans and drove to the auto repair shop down the street. My car needed new brakes, and since I was working noon to 9 p.m. every day, a morning appointment had been the only option. Frazzled from the late night and weird morning, I forgot to check my calendar and also missed an important 1 p.m. meeting with my largest client.

Those first three days set the tone for the entire two weeks.

On the morning of Day 14, I sat in bed reflecting on the experiment. Probably most surprising was the fact that it hadn’t changed how I felt at all. Despite a dramatic “improvement” to my schedule, I was just as unhappy and just as overwhelmed.

That’s when my mind drifted back to a conversation with a mentor of mine from several years earlier. My company was just getting off the ground at the time, and I was complaining about the stress. After listening to me, he said, “Stress doesn’t come from work. It comes from worrying about work. Why are you worrying so much?”

Suddenly, I realized that I was missing the point. The lesson I was supposed to learn from this experiment had nothing to do with my schedule at all. The reason the experiment failed was that, no matter how much my schedule improved or how much time I spent on fun and relaxing activities, I was still me.

I was still beating myself up over every dumb mistake. I was still saying terrible things to myself every time I fell short. I was still constantly worrying that I wasn’t good enough, smart enough, or productive enough. I was still eating poorly, still not making time for rejuvenating activities, still overwhelmed by my to-do list. The only thing that had changed was my sleep schedule. And it had changed for the worse.

The lesson I needed to learn was much deeper.

Imagine a little kid playing soccer. He runs back and forth, out of breath, trying his hardest. It’s cute to watch because the ball is almost as big as he is. But he’s so determined, and he’s trying so hard. He even makes a couple of goals, which you find impressive.

But then, the little kid trips over an untied shoelace and falls face first onto the grassy field. Immediately, his dad jumps up from the stands and screams, “Are you serious? You can’t even run down the field without falling? You’re such a loser!”

Witnessing this scene would make even the coldest heart burn with anger toward the little kid’s dad. Words like these leave wounds that aren’t easily forgotten, and we know this because we often use them on ourselves when we mess up. Perhaps that’s why it makes us so angry to hear them used on others.

While we may no longer see that little kid when we look in the mirror, deep in our hearts we know that we are still very much him. Every morning, we get out of bed and we do the best we know how. It’s hard, because our goals and dreams are so much bigger than we are, which makes the fact that we’ve already done so much pretty impressive. But we also fall short a lot, and that’s life.

While this experiment changed my schedule for two weeks, it didn’t change me. And that’s why it failed. It’s been several days since it ended, and my life is now back to normal with it’s long hours, early mornings, and late nights. But I’m happier and more productive than I’ve been in a long time.

While this was definitely the worst productivity experiment I’ve ever tried, I’m grateful for it because it taught me that I am still the little kid on the soccer field. It taught me that my happiness has nothing to do with where I go or what I do. And it taught me that kindness isn’t just for other people. I’ve decided to start cheering myself on.

– Jesse Lear is the co-founder of V.I.P. Waste Services, a company that contracts with apartment communities to pick up trash and recyclables from residents’ doors as a luxury amenity.