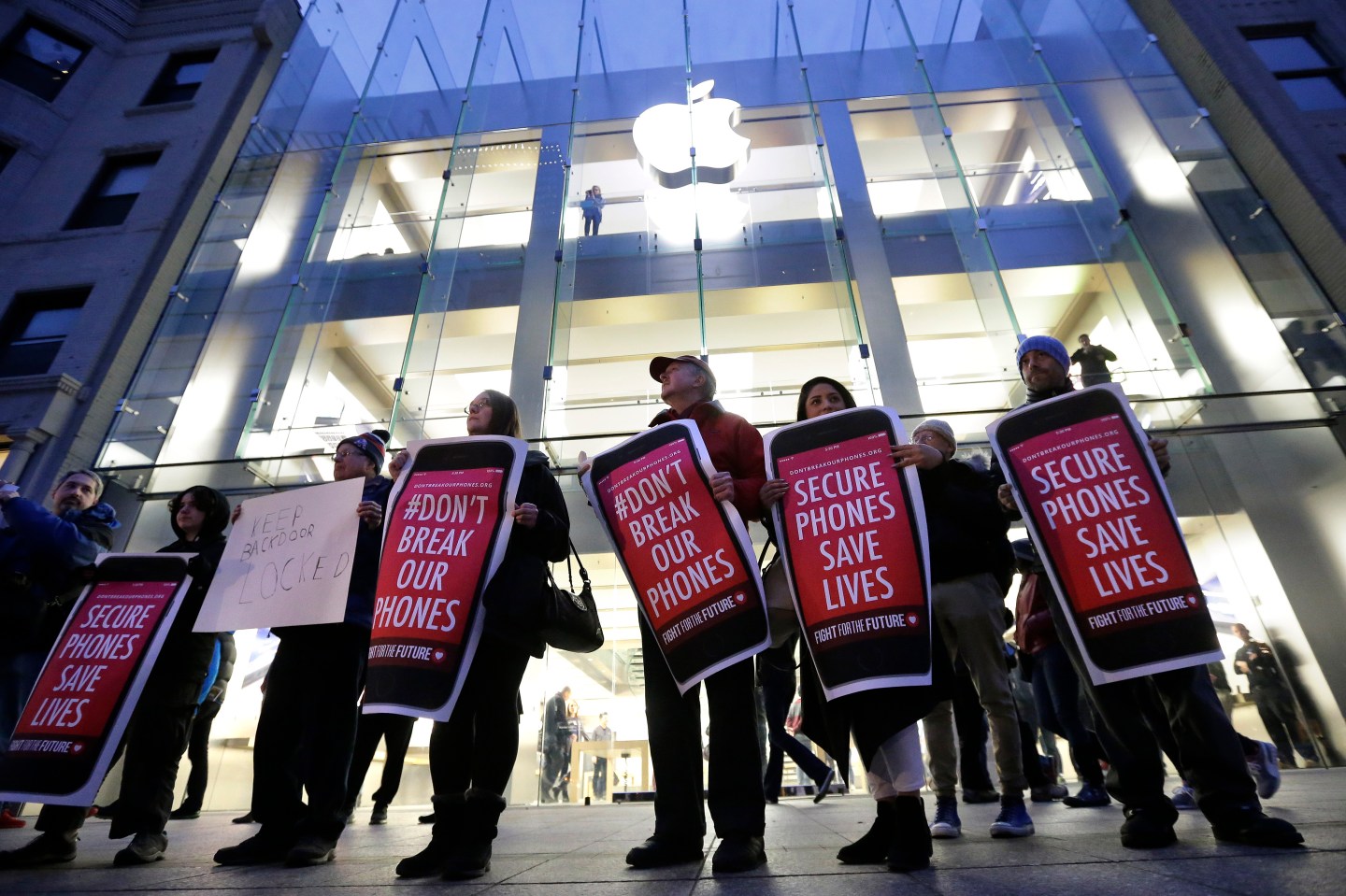 Protesters carry placards outside an Apple store Tuesday, Feb. 23, 2016, in Boston. Demonstrators are expected to gather in a number of cities Tuesday to protest the FBI obtaining a court order that requires Apple to make it easier to unlock an encrypted iPhone used by a gunman in December's shooting in San Bernardino, Calif. (AP Photo/Steven Senne)
Photograph by Steven Senne — AP

The public battle between Apple and the FBI over how to unlock encrypted iPhones generated a barrage of ill-considered legislative proposals around the country. But it doesn’t look like many of the various bills to mandate unlocking or ban encryption have gained much momentum.

On Tuesday, California legislators put an early anti-encryption proposal introduced in January out of its misery. Under a recent amendment, the proposal would have imposed fines on any company that was “unable to decrypt the contents of (a) smartphone pursuant to a state court order.” As initially filed by Assemblyman Jim Cooper, a former sheriff’s deputy, the bill went potentially even farther by barring smartphones makers from encrypting their users’ data by default, as Apple (AAPL) and Google (GOOG)now do.

The Assembly’s Committee on Privacy and Consumer Protection killed the bill without a vote at a session on Tuesday, the Sacramento Bee reported.

The broad coalition that came together to oppose the bill signals just how difficult it will be for encryption opponents to actually enact any of their far-out proposals, whether in other states or with lawmakers in Washington, D.C. Senators Richard Burr (R-N.C.) and Dianne Feinstein (D-Calif.) are working on a bill similar to Cooper’s, for example, that has already drawn widespread opposition.

Cooper’s bill was vehemently opposed not just by tech companies and civil liberties groups, as might be expected, but also by the influential California Chamber of Commerce and the California Bankers Association. That’s because strong encryption is needed to protect virtually every kind of commerce or financial transaction. Additionally, no method has yet been discovered that allows only law enforcement access without weakening security for all users.

For more about encryption, watch:

And that’s why despite more than 20 years of battles over encryption-weakening proposals, from the Clinton administration’s Clipper Chip plan to more recent notions of creating a “golden key” to unlock any phone, the tech industry continues to prevail in the debate.