Why Bashing Free Trade Is Paying Off for Trump and Sanders 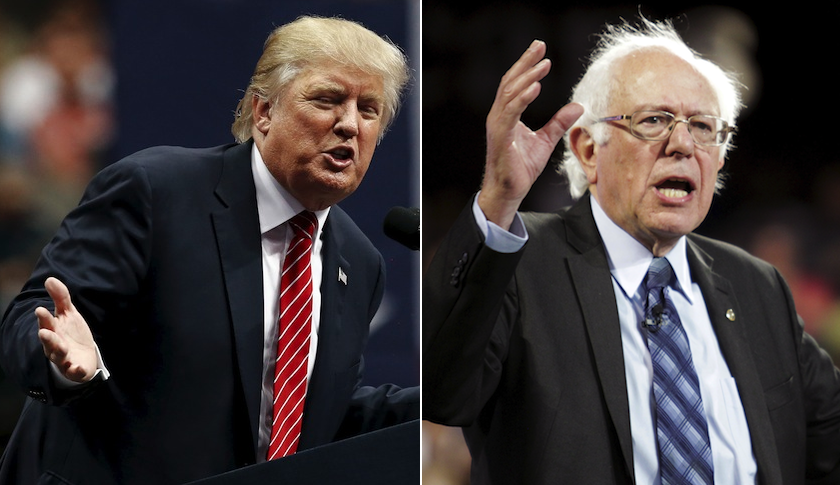 For a generation, free trade was a cornerstone issue of the Republican party, and of the center and right wings of the Democratic party. Now, it’s become an albatross around the neck of establishment candidates.

Earlier this week, insurgent candidate Bernie Sanders charged that Democratic frontrunner Hillary Clinton isn’t qualified to be president in part because of her support for free trade agreements. “I don’t think you are qualified if you’ve supported virtually every disastrous trade agreement, which has cost us millions of decent paying jobs,” he said. Among Republican candidates, the hostility is even more striking. Donald Trump propelled his insurgent candidacy in part by repeatedly railing against “bad” trade deals with China, Mexico (NAFTA was “a disaster”), and everywhere else. Ted Cruz, the only serious challenger to Trump, now says he opposes the Trans-Pacific Partnership, the biggest trade agreement in generation.

The rhetoric is causing great consternation among the business community and political elite. After all, the trade deficit has been shrinking in recent years. In 2015, it was $540 billion, or just 3 percent of GDP; compared with $761 billion. American consumers actually like buying imported goods and services: Japanese and German cars, plastic stuff from China, shirts from Cambodia, wines from Chile, vacations from Italy, and luxury goods from France. In fact, Americans favor free-trade deals generally, by a 51-39 percent majority, according to the Pew Research Center. But Republicans, according to Pew, say free trade deals have been a bad thing for the United States, by a 53-38 majority, while Trump supporters disapprove of such deals by a 67-28 margin.

So what is driving the sudden hostility to free trade? It’s not trade itself that is the problem– it’s the indifference to the long-term impacts of trade and an unwillingness to share its benefits. Let me explain: free trade has been coupled with a ‘let-them-eat cake’ attitude toward workers’ wages, health benefits, pension and retirement security, education and training. And that is precisely what the business community, writ large, and the Republican party have been dispensing in recent years. (For their part, both the Clinton and Obama administrations pushed free trade agreements as unalloyed positives, but were ineffective at fully offsetting their downsides.) So it’s no surprise that both the white, working class Republicans and Bernie Sanders’ young supporters are rebelling. Both groups are struggling to gain their footing.

The reality is that trade does expose people in America to competition with lower-paid workers. That has led to widely shared benefits – cheap stuff at Walmart (WMT)! But it has also contributed to widely shared problems: Pressure on wages and the loss of bargaining power. When jobs are lost to overseas competition, workers often lose their health insurance and retirement benefits. When industries are displaced, workers have to upgrade their skills or go back to school to remain viable.

For more on government policy, watch this Fortune video:

All this has happened. But the problem is that neither the business community nor the Republican establishment has taken efforts to ameliorate the downside of free trade. And when specific policies have been proposed by the Obama administration aimed at lessening the blow, Republicans have generally opposed them.

To wit: the business establishment and Republicans in Washington have steadfastly opposed raising the federal minimum wage, which has been stuck at $7.25 since 2009. On aggregate, corporations have not raised wages voluntarily, even as their profits have soared to record levels. The typical median income in 2014 was $53,657, below what it was in 1999—the year U.S. and China struck a deal that led China join the World Trade Organization.

When they were in control of the White House and Congress, Republicans didn’t lift much of a finger to expand insurance to working people. And businesses were quick to cut coverage when the economy went south. In 2010, nearly 50 million Americans lacked health insurance. And when the Obama administration put forward a plan, which borrowed liberally from Mitt Romney’s Massachusetts reform efforts, Republicans and the business establishment bitterly opposed. Since the passage of Obamacare in 2010, Washington Republicans have been obsessed with trying to repeal the Affordable Care Act.

If employment is becoming more insecure and pension plans are faltering and fading away, the government could take action to lessen the blow. But the Republican party, generally backed by large business lobbies, routinely calls for reforms in Social Security and Medicare that would have the result of reducing such benefits. Generous training and education grants could help affected workers revamp their skills. But, here again, neither the Republican party nor the business establishment has distinguished itself by stepping forward with comprehensive plans. Quite the opposite. ( Note: seven years into the expansion, earnings are rising at a meager 2.3 percent annual rate.

Can you see the dissonance? It’s like telling people they have to run half-marathons, while touting all the legitimate long-term health benefits of doing so. But once the runners set out, the race organizers refuse to offer them water or nutrition when they get hungry or thirsty, or aspirin to alleviate pain, or fleeces to deal with the cold and rain. After a while, people will start to grumble and resist.

So, yes, it’s important to sing the virtues of free trade, and to point out the many benefits that all Americans get from the flow of goods and services around the world. But to do so while ignoring or downplaying the negative effects is counterproductive. Let them eat cake politics won’t work any better in 21st century America than it did in 18th century France.