Why Financial Markets Are Happy About Peru’s Presidential Vote 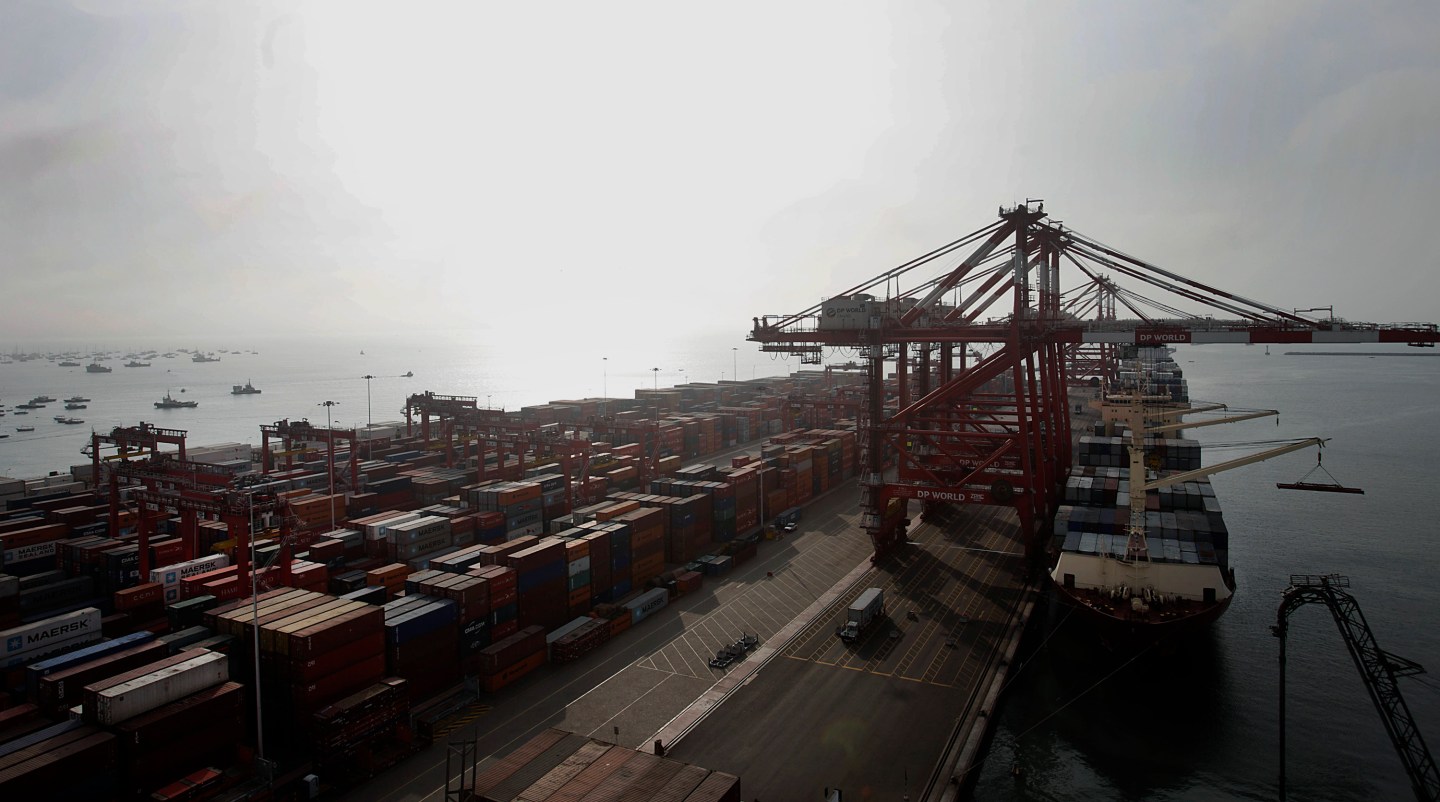 Containers wait to be loaded onto ships at DP World area of the Port of Callao in Lima, Peru, on Thursday, March 15, 2012. Economic activity in Peru expanded 5.4 percent from a year earlier, compared with 6 percent growth in December, the government's statistics agency said today in an e-mailed report. Photographer: Dado Galdieri/Bloomberg via Getty Images
Photograph by Dado Galdieri – Getty Images

Keiko Fujimori, the daughter of a jailed former president, led Peru’s election on Sunday but she likely faces a tight run-off against centrist economist Pedro Pablo Kuczynski in a vote that would protect the country’s free-market economic model.

Fujimori, whose father Alberto was Peru’s authoritarian leader throughout the 1990s, fell well short of the 50% needed for outright victory in the first round of voting and will likely be vulnerable in a second-round vote on June 5.

With about 40% of votes counted, Fujimori had 39% support while Kuczynski, a former World Bank economist, had 24% and leftist lawmaker Veronika Mendoza trailed with 17%.

A quick-count by pollster Ipsos also showed Kuczynski securing second place and heading to the run-off.

Despite her lead on Sunday, polls have shown opposition to Fujimori has grown since the start of the year and many opposed to her father’s divisive rule will likely rally behind her rival, whether Kuczynski or Mendoza.

The son of European immigrants, Kuczynski is a pro-business economist and a former finance minister but is more moderate on some social issues than Fujimori, 40, and does not have the baggage associated with her last name.

“We don’t want a polarized nation,” he said after dancing in front of supporters on Sunday night, although he urged calm until official results were in. “We’ve made progress but not enough. We’re going to be a progressive government, socially and economically.”

Fujimori has said she would drive economic growth forward at the end of a decade-long mining boom by tapping a rainy day fund and issuing new debt to fund badly needed infrastructure. She has portrayed herself as the only candidate who would be tough enough on crime.

Fujimori’s chances in the run-off will depend largely on whether she can distance herself from her father, who was convicted of corruption and human rights abuses tied to a crackdown on leftist insurgents during his 1990-2000 rule.

In a reminder of that bloody conflict, rebels presumed to be remnants of the Shining Path ambushed soldiers sent to safeguard ballots on the eve of the election, leaving at least six dead, authorities said.

“I’m sorry this government had allowed not only crime to advance in the streets but has also permitted Shining Path to keep taking lives and shedding blood in our country,” Fujimori said as she celebrated her first-round win.

Financial markets will likely rise on news of a Fujimori-Kuczynski run-off. Mendoza’s late surge before elections led Peru’s currency, the sol, to weaken 1.5% and the benchmark stock index to fall 4.39% over the past week.

In an emotional speech on Sunday night, Mendoza thanked her supporters before a crowd in Lima. “This campaign belongs to the people that want change!”

Despite its vast natural resources, it remains largely undeveloped outside its main cities, and many voters say outgoing President Ollanta Humala failed to fulfill his promises of reducing inequality.

Presidents are not allowed to run for consecutive terms in Peru and Humala has not endorsed any candidate.

The campaign was jolted by the unprecedented barring of two leading candidates late in the campaign, one for violating minor electoral procedures and the other for handing out cash while campaigning.

Critics said the ejections unfairly favored Fujimori and the head of the Organization of American States warned elections would be “semi-democratic”.

Fujimori has promised not to use her power if elected to free her father from prison, but she believes he will ultimately be absolved by the courts.

An Ipsos opinion poll afterward showed Fujimori would likely lose to Kucyznski by seven points if they faced each other in a run-off. Fujimori’s rejection rates also jumped, with 51% of Peruvians saying they would “definitely not” vote for her.