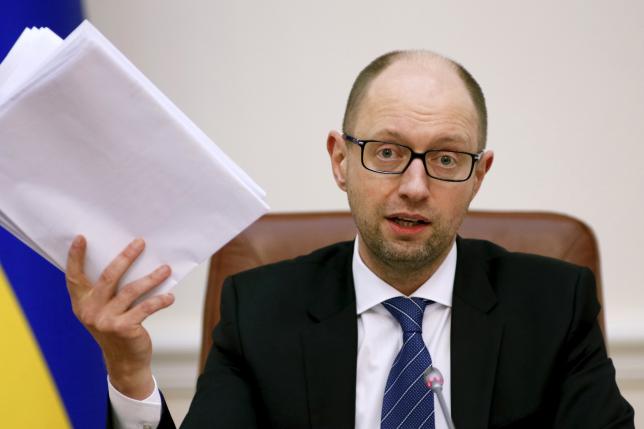 Ukrainian Prime Minister Arseny Yatseniuk tendered his resignation on Sunday, paving the way for Western-backed coalition parties to nominate an ally of President Petro Poroshenko to try to form a more stable government.

Yatseniuk survived a no-confidence motion in February, but political infighting and graft scandals have fractured the ruling coalition and further delayed the disbursement of aid under a $17.5 billion International Monetary Fund bailout program.

The self-described “kamikaze” prime minister came to office in 2014 determined to pass stringent economic reforms, but his public support has slumped into the low single digits, partly on the perception that his government has not done enough to hold oligarchs to account.

His departure removes an obstacle to the formation of a new government, which must try to push delayed reform bills through parliament against the opposition of populist former coalition partners who have vowed to oppose austerity measures required under the IMF program.

“I have taken the decision to resign as prime minister of Ukraine. On Tuesday, April 12, my request will be submitted to the parliament,” Yatseniuk said in a televised address.

“The political crisis in the country was created artificially. The desire to change one person blinded politicians and paralyzed their political will for real change,” he said.

Poroshenko’s BPP faction and Yatseniuk’s People’s Front party had been expected to announce a reboot of their ruling coalition next week.

In his speech, Yatseniuk said his party was committed to the coalition and made clear that he expected to be replaced by parliamentary speaker Volodymyr Groysman, the 38-year-old former mayor of a town in west-central Ukraine already touted as his successor.

“The parliamentary faction of the Bloc of Petro Poroshenko has nominated Volodymyr Groysman to the post of prime minister. Having done everything to ensure stability and continuity of our course, I declare my decision to transfer the obligations and responsibilities of the head of government of Ukraine,” he said.

A complete break-up of the coalition could have triggered a snap parliamentary election that looked likely to boost populist parties. Meanwhile, if Groysman secures parliamentary approval, the formation of a more coherent government should increase the chance that the IMF will disburse the next $1.7 billion tranche of loans, delayed since October.

Nevertheless some domestic reformers and Western powers backing Ukraine may be disappointed by Groysman’s likely appointment, having hoped that Finance Minister Natalia Yaresko, a U.S.-born technocrat, would get the top job.

Having an ally as prime minister could consolidate power in the hands of the president and his circle.

“The president will have more authority, more power for his team. Only time will tell if he will use this authority and this power for the good of Ukraine,” People’s Front lawmaker Anton Gerashchenko said on television channel 112.

It was frustration with cronyism and corruption under Russian-backed president Viktor Yanukovich that prompted thousands to take to the streets in 2013-14 in the pro-European “Maidan” uprising that swept Kiev’s current leadership to power.

Groysman is seen as a canny, persuasive politician who has grown in confidence as speaker of parliament – a role that requires a calm authority to manage the bickering and all-out brawls that periodically interrupt sessions in Ukraine’s chamber.

He has vowed to stick to IMF-backed reform efforts as prime minister, but the two-party coalition will only have a slender majority and some of its lawmakers have said they will not always vote on party lines.