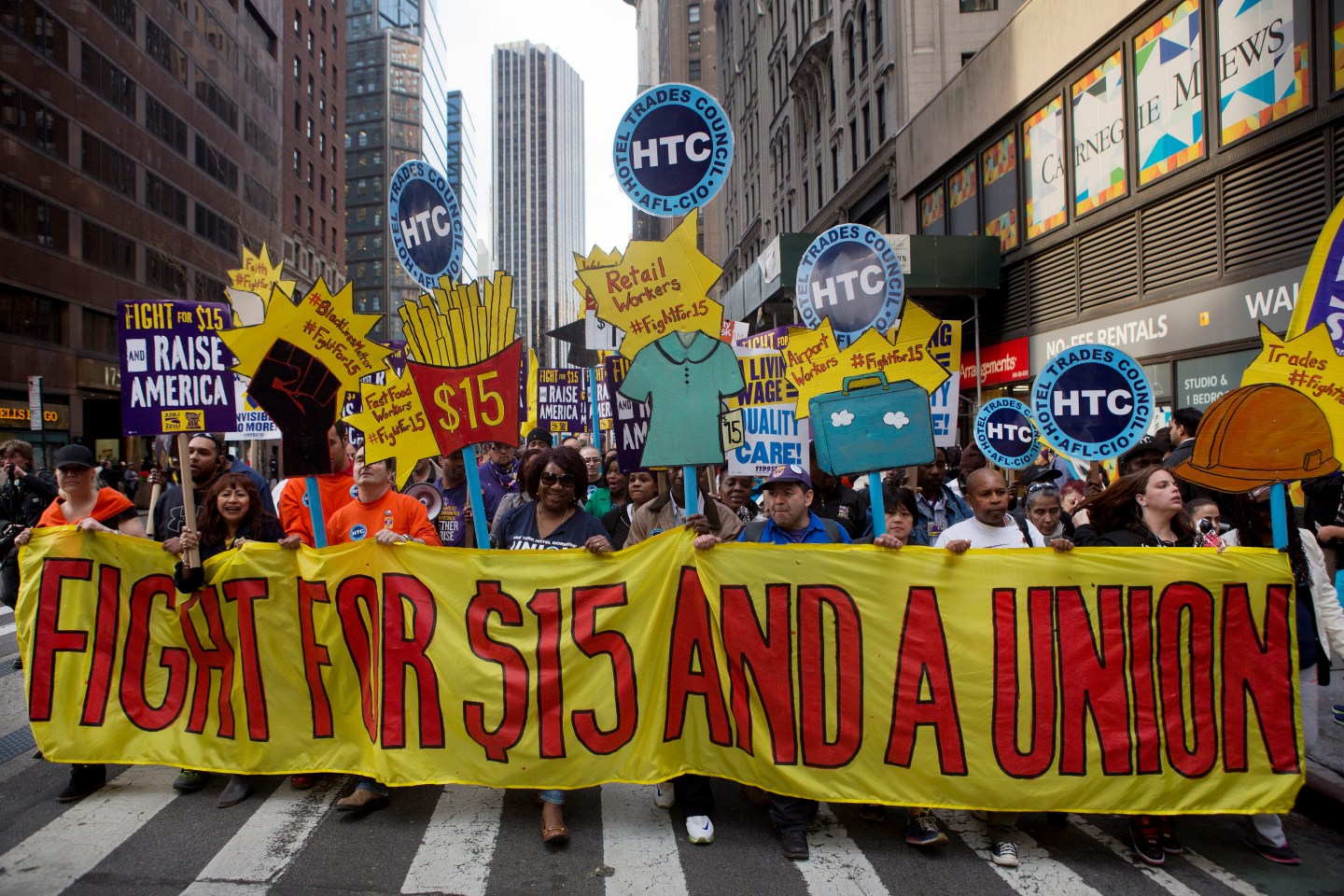 The Fight for $15 is having one heck of a spring.

Earlier this week, California raised the minimum wage statewide to $15 per hour by 2022, which will take place in incremental steps starting with a fifty-cent bump to $10.50 per hour in January 2017. That followed a move by New York State, also this week, to sign into law a raise its minimum wage, with workers in New York City seeing their minimum hourly wage rise to $15 by 2018. Other less economically vibrant parts of the city will have a new minimum of $12.50.

But even some progressives are not partying. The liberal governor of California, Jerry Brown, said at the signing ceremony for his bill that “Economically, minimum wages may not make sense.” But that “morally and socially and politically, they (minimum wages) make every sense because it binds the community together and makes sure that parents can take care of their kids in a much more satisfactory way.” This is a pretty striking statement coming from one of the most high-profile figures in the Democratic Party. It’s not everyday you see a governor sign a bill he admits might not make economic sense.

But Brown was put in a bind: He fought the minimum wage increase, arguing that it would lead to job losses and make running a business more difficult. But his hand was forced by overwhelming public support for minimum wage increases. Had he not compromised on this measure, an even more aggressive ballot initiative would have likely been passed by California voters in November.

The bill’s passage is another stunning victory for the fight-for-15 movement, which in the span of less than four years has gone from staging sporadic fast food worker strikes, to securing a 50% increase in the minimum wage in two of the nation’s most populous states.

But a win for grassroots democracy is not necessarily one for the working poor. David Neumark of the University of California Irvine has spent decades studying the effects of minimum wages on labor markets. In a recent paper called “Policy levers to increase jobs and increase income from work after the Great Recession,” Neumark reviewed decades of literature on the subject and found that the vast majority of studies show that increasing minimum wages does cause job loss. Other policy levers, like government wage subsidies and hiring credits, however, don’t have those same adverse effects.

But those alternatives are politically problematic. First, increasing the earned-income tax credit or enacting wage subsidies puts the burden of raising the employment levels and wages of low income on the government—and more specifically government budgets—at a time when government budgets are already. The costs of raising the minimum wage, on the other hand, are spread out across the entire economy in ways that are difficult to measure. Second, programs like wage subsidies—where the government pays workers the difference between the market wage and whatever wage politicians deem moral—are sometimes difficult for voters to understand or for politicians to get credit for.

A minimum wage increase, on the other hand, is easy to explain, and it doesn’t directly impact the deficit. That’s made it wildly popular with voters, particularly liberal voters, and made it hard for Democratic Party leaders to fight even if they think the alternatives are better.

The result: A populist workers movement that was able to push through an idea—raising the minimum wage to $15—that is the simplest, but perhaps not the best, solution that we have to stagnant workers wages. It is also yet another signal that technocrats, who place a lot of faith in mainstream economics, are losing the hearts and minds of the Democratic Party to their populist counterparts.

The technocrats long ago lost the Republican Party. That was clear four years ago, when Mitt Romney, who is a technocrat at heart, abandoned a tax plan that would have made budget wonks comfortable after he failed to catch fire at the start of the 2012 primary season. Shortly, thereafter he proposed a plan that provided big tax cuts for the wealthy while promising to not add the the deficit—something that was pretty much impossible.

It makes sense that the Democratic Party would follow the Republican Party in its abandonment of wonkery. That’s what wins votes. Simply put, Americans don’t really care whether their politicians’ plans add up. Sure, knowledgeable advocates might get uncomfortable when Bernie Sanders doesn’t appear to understand the nuts and bolts of bank regulatory policy, but most voters want someone who expresses their feelings, rather than a candidate who would nail a job interview with Janet Yellen.

And to be fair to Governor Brown, it’s not as like we should hope for politicians to be in thrall to technocracy any more than we would want a hopelessly populist politician in the pilot’s seat. Neumark, for instance, estimates that the new California wage hike could cost between 100,000 and 200,000 jobs in California. At the same time, it will significantly boost the wages of as many as 2 million more. If a minimum wage hike is the only politically viable option to help these workers earn a living wage, even the most heartless bean counter out there would have to say it’s worth considering.