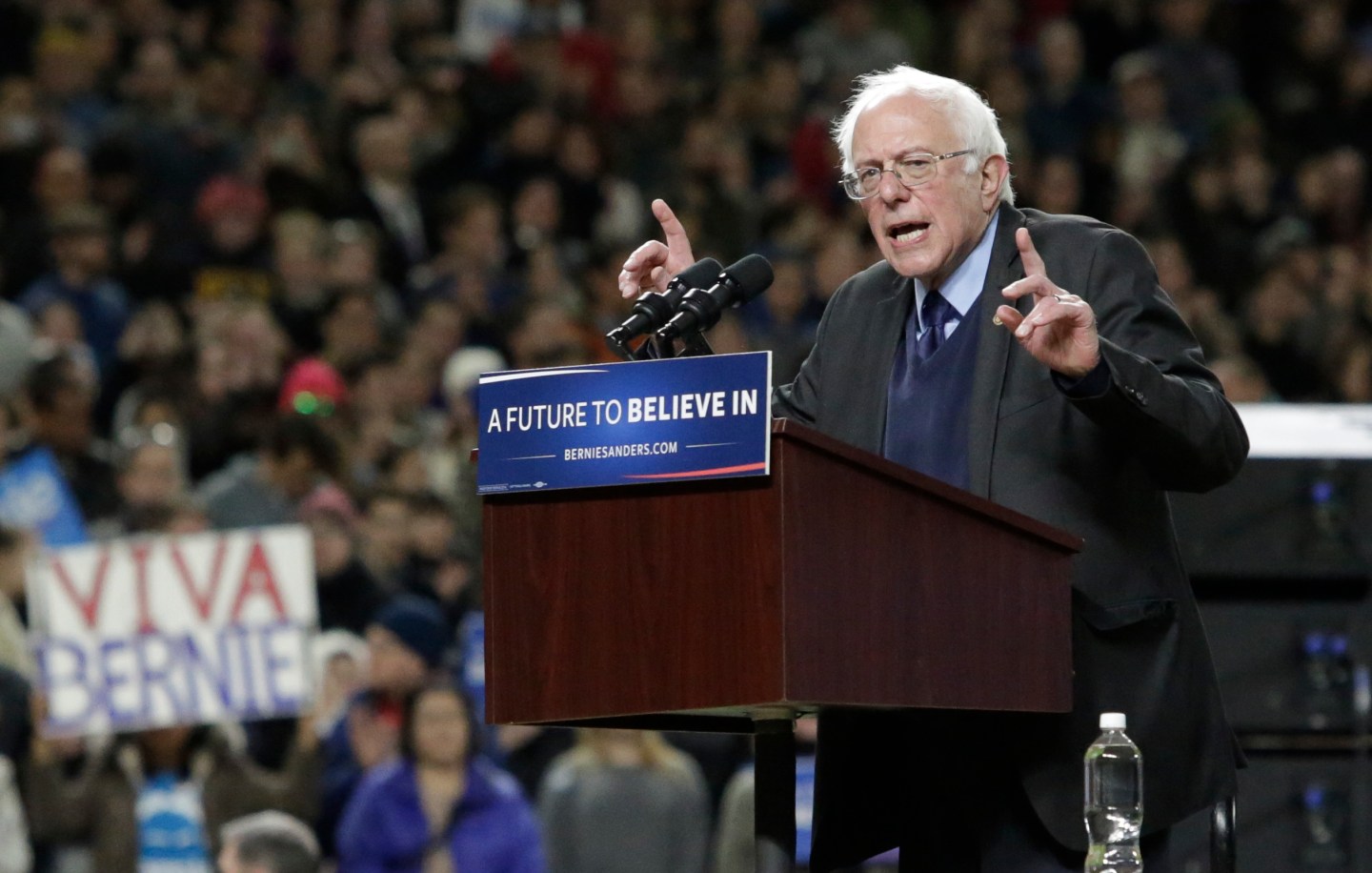 Don’t bother Bernie Sanders with the details on bank reform.

For the Vermont Senator, the matter of just how we should “break up the banks,” is far less important than the obvious fact that it should be done.

This philosophy was again on display Tuesday when the New York Daily News published a transcript of an interview conducted between the paper’s editorial board and the democratic presidential candidate. The paper questioned Sanders on his promise to break up the nation’s largest banks, which he has argued must be done because large, Wall Street banks were “too-big-to-fail” following the crisis, and they are bigger today.

While that argument for why the banks should be broken up is simple, Sanders has been unable to describe how he would get this done. In the Daily News interview, Sanders says you can break up the banks by passing legislation to do so. But, as Sanders seems to acknowledge, a law like that, given how hard it was to pass the Dodd-Frank financial regulations, is unlikely to get through Congress. As an alternative, Sanders says that the Treasury Department could break up a big bank, which Sanders says it has the authority, under Dodd-Frank, to do if the bank is determined to be a “danger to the economy.”

Pressed on whether he believes the Fed has the authority to do this under Dodd-Frank, Sanders said, “Well, I don’t know if the Fed has it. But I think the administration can have it.”

In the past, Sanders has said that he would require the Treasury Department to draw up a list “too-Big-To-Fail” financial firms, and then use the Section 121 of the Dodd-Frank law to break them up.

But the Treasury Department isn’t able to make that determination on its own. In fact, ordering a bank to sell off assets and slim down, requires a majority vote of Fed Governors as well as a two-thirds vote of the members of the 10-member Financial Stability Oversight Council (FSOC), of which the Treasury Secretary is only one of 10 voting members. And whether or not Bernie Sanders can marshal the support of the other regulators that sit on this board is another matter.

Even if he is able to install regulators sympathetic to his belief that large U.S. banks should be made smaller—which would require Senate approval—he will be unable to change the overall makeup of the Federal Reserve until 2022 at the earliest. That’s because Fed board members serve staggered, 14-year terms. There are currently two vacancies, which Sanders could fill with Senate approval, but he would still need two more sympathetic votes that he’d be unable to garner until at least 2022.

The Daily News also asked what the recent news of a federal court’s decision to overturn insurer Metlife’s designation as a systemically important financial institution “presages for your program.” Sanders response? “It’s something I have not studied, honestly, the legal implications of that.”

For those who follow financial regulation closely, and all the changes that have been put in place in the past few years, these responses are frustrating. Sanders says we need to break up the banks, then proceeds to ignore what would need to be done to make that happen, and the fact that the judicial branch of the federal government might just have some qualms about his plans. If the President can’t show command of details of proposed public policies, what confidence can we have that he will choose the best ones?

have you read the transcript of the Sanders interview with NY Daily News https://t.co/JhoWEcUJpV ?The guy seems clueless on his own #1 issue

If main policy is break up banks/reg wall st how can you not even know what's legal or what regulators do. Sanders interview is disturbing

kudos to NY Daily News for pressing sanders on details of his Wall Street "plan". wow did he not have details.

At the same time, one could argue that it’s not the job of the President to understand the nuts and bolts of policy but to represent the American people and generally try to move the country in the direction that the electorate wants go. Polls clearly show that the American people are in favor of making banks smaller, and the will of the people should be enough to justify most actions in a democracy.

Second, it’s clear that Sanders would be advocating downsizing American financial institutions even if he weren’t making the argument that it would help us prevent the next crisis. As he put it in the Daily News interview:

If you look at the six largest financial institutions of this country, their assets somewhere around $10 trillion. That is equivalent to 58% of the GDP of America. They issue two-thirds of the credit cards in this country, and about one-third of the mortgages. That is a lot of power.

And I think that if somebody, like if Teddy Roosevelt were alive today, he would look at that. Forgetting even the risk element, the bailout element, and just look at the kind of financial power that these guys have, would say that is too much power.

Sanders doesn’t enjoy getting down in the weeds to discuss the details of how he would enact his policies, he’d much rather debate the their morality, while figuring the rest will work itself out in the end.

But even on this score, the idea that economic justice can’t coexist with large and politically powerful corporations and banks doesn’t pass the smell test. Sanders likes to name check Nordic countries like Denmark as examples of places where “the government works for ordinary people and the middle class, rather than, as is the case right now in our country, for the billionaire class.”

But Denmark has an economy about the size of Indiana, and still is able to promote economic justice at the same time that it is home to giant multinational financial institutions like Danske Bank, whose assets are larger than Denmark’s entire economy, and industrial conglomerates like Maersk which are far larger relative to the Danish economy than any U.S. corporation is to the American economy.

This may be a debate Bernie Sanders is comfortable having, because he’s shown an unwillingness to address serious procedural criticisms of his regulatory ideas.