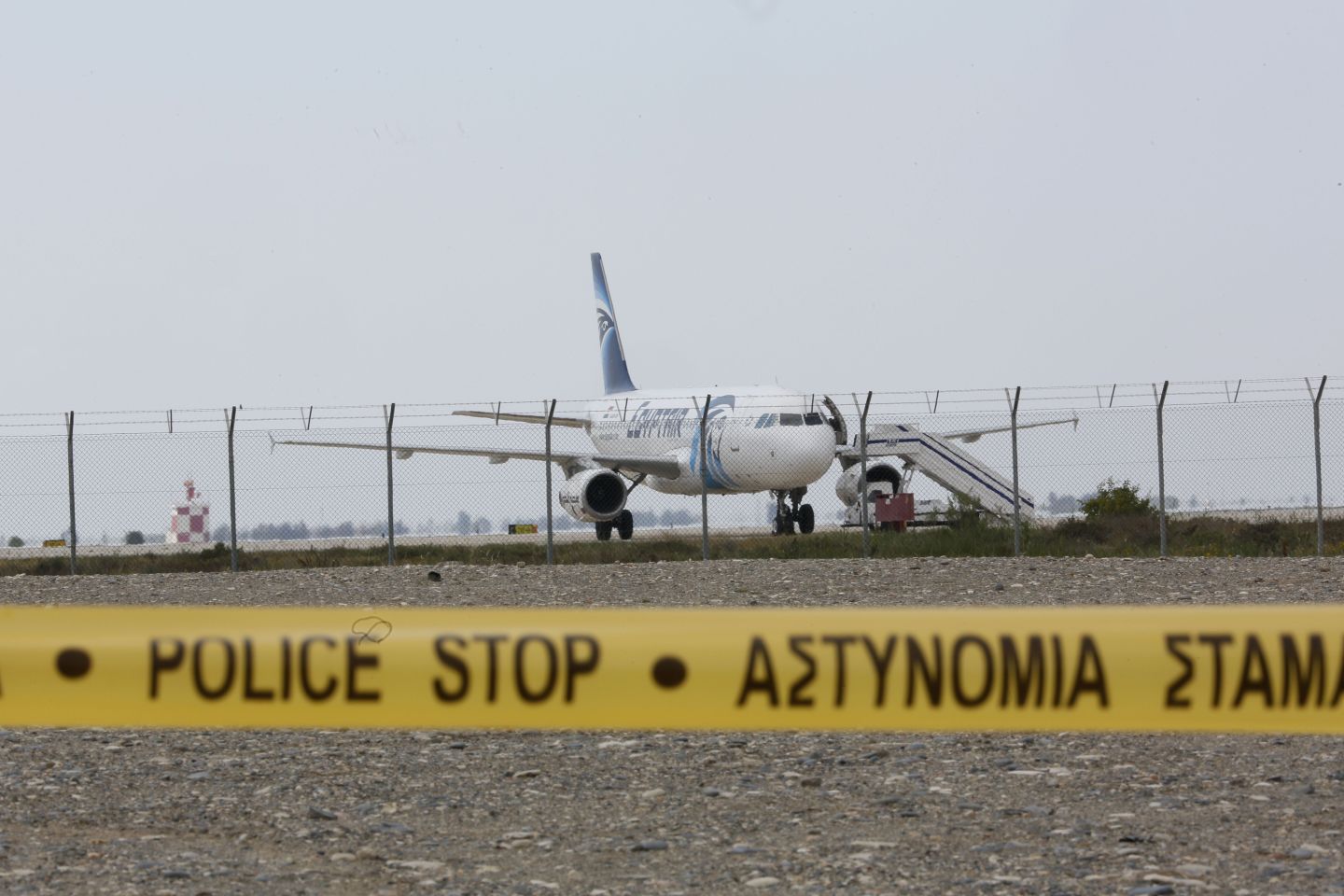 Cypriot security forces cordon off the area around Larnaca airport where an EgyptAir Airbus A-320 (C) is seen on the tarmac after being hijacked and diverted to Cyprus on March 29, 2016. / AFP / BEHROUZ MEHRI (Photo credit should read BEHROUZ MEHRI/AFP/Getty Images)
Behrouz Mehri — AFP/Getty Images

Wall Street stock futures are lower this morning over renewed fears for the global economy after some weak Japanese economic data and some routine gloom from the Bank of England, which is worried, among other things, by the potential impact of the U.K.’s vote on whether to leave the E.U.. Bonds yields have fallen as safe assets attract more interest, while U.S. crude oil futures have also fallen further below $39 a barrel.

Today’s must-read story is by Fortune’s Geoff Colvin on the jobs conundrum that Donald Trump and Hillary Clinton will likely ignore–and why that’s bad news for everyone.

An Egyptian plane on a flight between Alexandria and Cairo was hijacked and forced to land in Cyprus by a man apparently distressed over a family matter. After the EgyptAir plane landed at Larnaca airport, the hijacker released all the people onboard except four foreign passengers and the crew following negotiations, EgyptAir said. The incident revives concerns about the safety of Egypt’s airports, coming so soon after ISIS smuggled a bomb aboard a Russian airliner carrying vacationers.

Federal Reserve Chairman Janet Yellen will address the Economic Club of New York today at 11:30 a.m. She will respond to questions from economist Alan Blinder and Columbia Business School Dean Glenn Hubbard. Investors will be listening carefully for any indication of how the central bank plans to handle future interest rate hikes.

The Energy Thought Summit, a two-day event that brings together thought leaders around the world to debate the state and future of energy, kicks off in Austin, Texas this week. Speakers include executives from Alphabet (GOOG), Exelon (EXC), and NASA.

The S&P/Case-Shiller U.S. 20-city home-price index, a measure of home prices around the nation, for January will be released today. Home prices climbed steadily last year, hitting their highest levels in eight years. Economists will be watching to see if the Federal Reserve’s move to raise interest rates–and the subsequent gain in mortgage rates–has affected housing prices.

McCormick & Co. (MKC), the maker of well-know spice brands like Old Bay and Lawry’s, reports its first quarter earnings today. While earnings are expected to have slowed from previous periods, the company’s stock is still as high as its ever been. Investors still expect the company to perform well and anticipate it could make key acquisitions to help spur future growth.