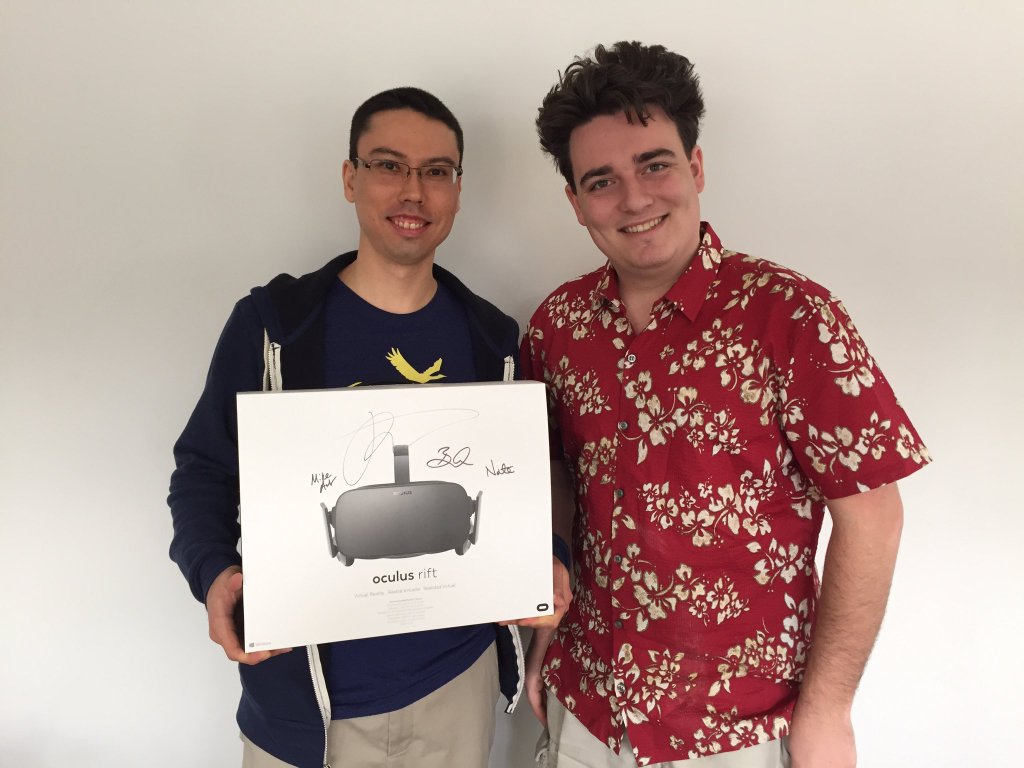 Palmer Luckey didn’t dress appropriately for Alaska, but he was too excited to care.

On Saturday, the founder and CEO of Oculus, dressed in his traditional Hawaiian shirt, shorts and flip flops, stepped off of a plane and onto The Last Frontier state to hand deliver the first Oculus Rift consumer version to Ross Martin, the first person to officially pre-order the device in January.

Luckey, who posted video of the delivery to Facebook, was barely able to contain his excitement.

“It’s kind of like me taking all this work and handing it off to you, so you have to be sure you have fun with it,” he tells Martin in the video.

While he lets Martin unbox the Rift himself—barely—it’s mere seconds before Luckey grabs the headset, begins adjusting it to fit, and puts it on Martin’s head. A semi-awkward moment follows when Martin takes off the headset and notes that he doesn’t have a PC powerful enough to run virtual reality at his office, where the delivery was made. (He was expecting to receive it during the week, he explains, when he’s typically at the office.)

Computer processing power, of course, is a significant hurdle for Rift and other VR headsets. An Nvidia survey from last year found that less than 1% of the PCs on the market have the graphics and processing power required to adequately support virtual reality.

While the Oculus CEO was the only executive to make the trip to Alaska, Luckey wasn’t the only one to celebrate the moment with Martin. Facebook founder and CEO Mark Zuckerberg, who bought Oculus for $2 billion two years ago, sent along a message saying he hoped Ross enjoyed the unit.

Martin, perhaps too busy spending time in the virtual world, says he didn’t notice the Zukerberg note until much later.

When Mark Zuckerberg congratulates you by name, but you don't notice till 12 hours later… you bet I will, Mark. pic.twitter.com/tQvvi1KaRb

Luckey’s trip to Alaska was a short one. Though his initial flight out delayed, Luckey departed promptly after delivering the unit to Martin to return to Oculus headquarters in Southern California to prepare for the Rift’s wide-scale launch on Monday.

“Now I need to get home as fast as I can so that I can keep working on the launch,” he says in the video. “And hopefully those flights don’t get delayed or we’re going to be in a real pickle.”

For more about Oculus orders, watch:

He made it back, and units are shipping out today for the company’s Kickstarter backers. Units for customers who pre-ordered the $600 device in January will likely begin shipping on Wednesday with expected arrival dates of the end of the week, says Luckey.

Odds are that Luckey won’t be making any of those personally.