Obama’s Visit to Argentina Exposes a Nation Struggling to Grow 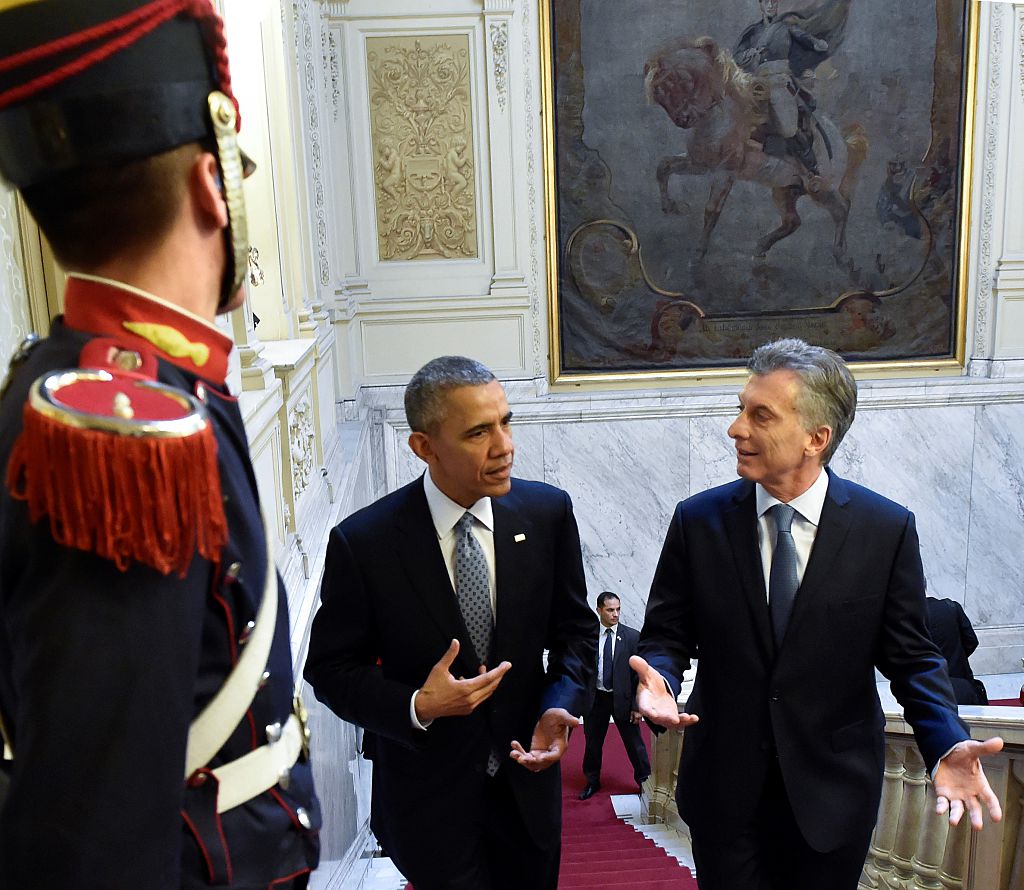 The word “La Beastia!” blared from Argentina’s broadcasters this week as they plied audiences with reports about President Obama’s arrival and, namely, the fortified car he travels in. “La Beastia is coming!” The presidential limo—which is nicknamed “The Beast” for its imposing size, its cost, and its ability to withstand submachine gun fire, explosions and other threats—has become a metaphor for Argentina’s estimation of the United States’ power in the Americas.

President Obama’s visit—only the fifth by a U.S. president in Argentina’s 200-year history—comes on the heels of center-right President Mauricio Macri’s successful election bid, after a dozen years of leftist governments that cursed Washington while they courted anti-American leaders around the globe. Many Argentines have reacted strongly to the poor timing of Obama’s visit. It marks the 40th anniversary of the military coup that led to years of brutality and an explosion of misery for the nation’s people.

America’s ties to Argentina have waxed and waned over the years, as Washington engaged in conflict areas throughout Central and South America and backed, then balked at, International Monetary Fund bailouts for the ailing Argentine economy. In the 1990s, then-presidents Bill Clinton and Carlos Menem agreed on ways for Argentina to comply with its lenders’ demands; they reached common ground when Menem pledged lower tariff barriers, signed onto the nuclear non-proliferation pact, sent soldiers to join UN peacekeeping forces, and swore off any reversals in to Argentina’s plans for economic reform.

But a wave of downturns in Argentina led to the election of several populist leaders who blamed the U.S. for propping up neighboring dictatorships in the 1970s and 1980s, and directly intervening in others. These populists boosted wages, borrowed money, reneged on more debt, and accused Washington of scuttling financial bailouts and sending beleaguered Argentina into a tailspin that landed over half the population in poverty. As Argentina nationalized a large swath of its economy, including massive pension funds and the energy company YPF, which was majority owned by Spain’s Repsol, the nation’s export and commercial credit agency ratings plunged further.

Today, critics have harsh words for Macri’s first 100 days as president. Argentina suffers a soaring inflation rate. The government handed out nearly 30,000 pink slips to government workers, put an end to electricity subsidies, made a $4.65 billion payment to U.S. hedge funds (dubbed “vultures” by the previous government) to settle the country’s debt (Buenos Aires has defaulted a staggering eight times on its debts). There has been a 50%-plus devaluation of the peso since the lifting of currency controls.

But what may be considered a set of stinging indictments to some is a string of hard-won accomplishments to others. Supporters contend Macri’s early moves are essential if Argentina is to emerge from isolation and enjoy a modicum of economic growth and political stability. Reductions in government payrolls, they say, have streamlined the public sector and helped to eliminate “ghost workers” (those who draw salaries for jobs that don’t exist). Settling with foreign creditors positions the country to regain its standing as an international borrower. Mindful of the paralyzing worker strikes that took place the last time the government slashed public sector funding in 2001, Macri has presented his position simply: it’s either economic austerity until Argentina regains creditworthiness and economic growth is restored, or reckless spending and runaway inflation will cripple the country.

No matter their political preferences, taxi drivers, shopkeepers, diplomats, and demonstrators in Argentina tend to agree on the corrosive effects of corruption. From the 1976 military junta through the uneasy return to democracy beginning in 1983, Argentina has been wracked by abuses of power that run broad and deep. Those trained to protect (police, military, and security services) people have had a sordid history of kidnapping, extorting, and killing upward of 30,000 civilians; and the institutions that are supposed to inquire and adjudicate (the courts, official commissions, and investigative bodies) have been so reckless with the truth that the battles for transparency and justice have been sidelined as much as they have been satisfied. Palatial accommodations for government officials and their cronies have stood in stark contrast to the crumbing infrastructure across the country. Schools, hospitals, transportation systems, energy, sanitation, and public utilities satisfy only a fraction of Argentina’s needs.

This week, Macri added another item to the list of Herculean tasks already on his agenda: stamping out graft. As he beckoned to his international counterparts at Davos earlier this year, Argentina now seeks tens of billions of dollars in foreign direct investment. The way to raise living standards, he tells his domestic audience, is to gain the trust of deep-pocketed financiers.

Objections abound. You can find them in the headlines of left-leaning newspapers, on the floor of the opposition-dominated Congress, and among the protestors on the front steps of the country’s Central Bank. Equating Obama’s visit with historical American interference in the region, longtime social activist Vera Jarach seethes as she calls the Macri government insensitive to the economic and social challenges of average Argentines. Jarach is a founding member of the Madres de la Plaza de Mayo, mothers of Argentina’s “disappeared,” referring to those who lost their lives fighting for social justice during the Junta. Jarach’s 18-year-old daughter, Franca, was one of the “disappeared” the military hunted, kidnapped, tortured, put on a plane (one of the many so called “death flights”) and dumped into the ocean far from Argentina’s shoreline. That was in 1976.

Wearing the signature white headscarf stamped with her daughter’s name, age, and disappearance date, Jarach walks along the open promenade at the Parque de la Memoria in Buenos Aires, where stone walls designed after the U.S. Vietnam Memorial are etched with the 9,000 names of those known to have perished among the disappeared.

It is a hot day, and Jarach’s pale blue eyes are squinting under the bright sun. She is clutching a white lily to toss into the ocean as a memorial to the “disappeared”—a ritual the mothers perform often. She casts the flower into the water and watches it float. “My daughter could have been an artist, or a doctor, or a scientist,” she says. Instead, her life ended early, “and I carry on her fight for justice.”

Will the new government respond? She shakes her head. Previous governments prosecuted over a 1,000 perpetrators of the Junta’s systemized elimination of their opposition. They stood for the people, she says. “Macri only cares about commercial” ties and will wind up in the pocket of the U.S., she warns. And President Obama? “He doesn’t care about human rights, about economic rights, about the unemployed.”

Last week, after Argentine critics blasted Obama and Macri for the insensitive timing of the visit, the White House announced plans to declassify and share U.S. intelligence documents about the 1976-1983 period.

While well-known activists like the Madres de la Plaza de Mayo have long-challenged crackdowns on opposition, many Argentines are more reticent to raise their voices. They, too, are skeptical of change, and fear the return of harsh government. A Buenos Aires entrepreneur who once led one of the nation’s major agribusinesses was succinct, but spoke off the record: “Am I hopeful about the future? With 12 straight years of corruption, the good people leave and the bad people stay.” He uses both hands to tick off a list of hurdles: punishing tax rates that make it prohibitive for Argentine exporters (beef, grains, and other food stuffs have been hit hard) and almost impossible to secure critical imports (sorely needed technologies, for example); commercial permits and licensing based on cronyism; a judicial system rife with fraud; no guarantees for foreign investors, a currency—the Argentine peso—that no one wants; the list goes on and he laughs as he runs out of fingers.

Sizing Up the Opportunity

A veteran Argentine foreign ministry official who has worked on North American affairs speaks excitedly about Macri, the two-term mayor of Buenos Aires who has quickly entered the world stage, but worries that while the new president has surrounded himself with some first-rate advisors, the foreign ministry, among many other government agencies, is hampered by cynicism and mediocrity. “We have lost so much time aligning ourselves with Venezuela, Cuba, and other military dictatorships in the region, and pursuing others, like Iran, China and Russia, outside of Latin America,” he said. Argentina must now harness its best talent to raise the country’s profile by becoming trade, economic, and diplomatic partners with the world’s leading democracies.

With prized beef and seed production, rich shale deposits, an auto and auto parts industry, and a highly literate population skewed toward the job ready 15-24 year old population, Argentina has pressing priorities: shed export controls, train its workforce, and expand its markets beyond once-promising but now volatile partners like Brazil, Venezuela, and China.

As leftist governments in Latin America teeter, Argentina recognizes its opportunity to become the regional leader and its most firmly committed reformer. Indeed, the size of the Foreign Ministry’s North American department has doubled since Macri took power – from three professionals to six – but it is overwhelmed with work. All of the government agencies tasked with North American affairs – from security to statistics – have been in overdrive for the Obama visit. Now it is up to Macri’s government to maintain the momentum.