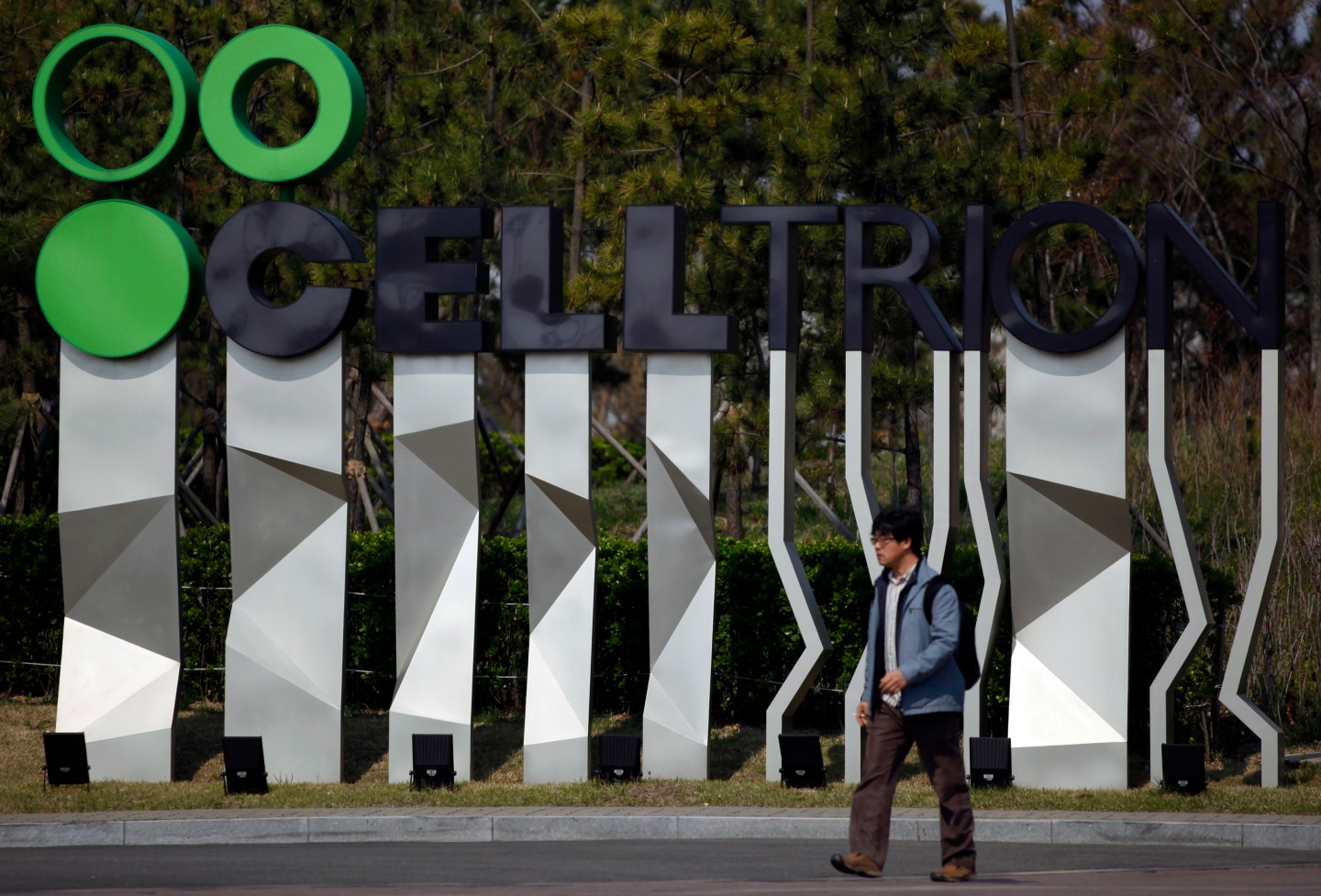 A man walks past a logo of Celltrion Inc in front of the plant in Incheon, west of Seoul April 26, 2013. Celltrion Inc founder's offer to sell the controlling ownership of the $3 billion firm has opened the door for big pharmas and new entrants like Samsung to easily crack into the market for copies of complex biological drugs that is tipped to become a multibillion-dollar market in the coming years. Picture taken April 26, 2013. To match CELLTRION-SALE/ REUTERS/Kim Hong-Ji (SOUTH KOREA - Tags: BUSINESS DRUGS SOCIETY LOGO) - RTXZMM5
Photo by Kim Hong-Ji — Reuters

If an unidentified group named “Ghost Raven Research” is right, one of South Korea’s most valuable companies, and it’s largest biotech company, could be a near complete fraud. Earlier this month, the anonymous research group published a report saying Celltrion, a $10 billion “biosimilar” company, was a “massive accounting fraud,” and that at about “90%” of the company’s revenue have been faked.

The report is juicy: Some of the highlights are that a top executive of Celltrion was chummy with a white collar criminal, claims an accounting scheme that has whiffs of Enron, and depicts a deeply competitive medical-related business with structural headwinds that will be hard to overcome, much like Theranos. The charges are also pretty close to accounting tricks Valeant was accused of by a short seller last year.

But Celltrion, which makes drugs that mimic well-established medications that go off-patent, received a nod of legitimacy from the FDA last month. An advisory panel overwhelmingly voted that its biosimilar of arthritis drug Remicade should be approved in the U.S. And Celltrion has signed a marketing deal with Pfizer (PFE) to distribute its drug.

Biosimilars are similar to generic drugs. The difference is that medicines biosilimars are trying to duplicate tend to be much more complex than in the generic market, and the make-up of the copycat drug isn’t always exactly the same as the original (hence, the name bio-“similar”). Although it’s easy to imagine any number of problems that can go wrong with these knock-offs, pharmaceutical executives acknowledge that they are formidable competitors.

Speaking at a JPMorgan conference earlier this year, Roche CFO Alan Hippe said, “The biosimilar impact is coming.” In 2018, three of Roche’s biologics go off patent, including cancer treatments MabThera, Herceptin, and Avastin. The loss of patent protection is expected to significantly dent sales once biosimilar options hit the market in coming years.

Ghost Raven’s report centers mostly on accounting rather than science. According to the report, Celltrion Healthcare is a subsidiary of the company that is meant to help distribute Celltrion’s drugs. Here’s roughly how Ghost Raven says it works: Celltrion, the parent company which is also the developer and manufacturer, makes the biosimilar drugs. It then sells these drugs to Celltrion Healthcare. This division is responsible for selling the drugs to the masses.

The problem, according to Ghost Raven, is that nearly 98% of the revenue Celltrion has reported are from sales it has made to its own subsidiary. Worse, the subsidiary hasn’t been able to offload most of these drugs yet—Ghost River says less than 18% of of the product ever “purchased” by Celltrion’s subsidiary has ended up with end customers—and has a huge, and growing, inventory of unsold drugs, the report says. What’s more, the income statement of the subsidiary Celltrion Healthcare shows that these sales aren’t being accounted for properly. For example, Ghost Raven says that, in theory, Celltrion Healthcare’s costs should closely match the sales revenue for the parent company. (If Celltrion Healthcare is buying drugs from Celltrion, its out-of-pocket expenses are simply the price of the drug, and the money goes to the parent.) These two items are out of line, the report says. A few years ago, the Wall Street Journal pointed out similar issues with Celltrion’s accounting.

There are other problems, according to Ghost Raven. Seo Jung-jin, founder and CEO of Celltrion, was formerly a top executive at Daewoo Motor, and served as a “standing advisor” to the group chairman of Daewoo “in charge of Daewoo Motors Co,” according to an online profile. In 1999, shortly after Jung-jin left Daewoo, the auto manufacturer went bankrupt. In 2006, Kim Woo-chong, the former chairman of Daewoo Group, was sentenced by Korean court to 8.5 years in jail for embezzlement and accounting fraud.

Ghost Raven also believes the biosimilar business is overhyped in general. While the pharmaceutical market is huge, competition is fierce, and new companies continue to enter the market. Further, biosimilars will have to sell at a big discount in order to cut into the sales of companies like Merck and Roche.

The trouble for Ghost Raven is that Celltrion’s business has recently been gaining momentum. Last month, the FDA Arthritis Advisory Committee recommended approval of Inflecta, a drug developed by Celltrion and marketed by Pfizer that mimics Johnson & Johnson’s Remicade. Celltrion’s drug has already been cutting into J&J’s sales in Europe. Celltrion’s shares, which are traded in South Korea, are up 60% in the past year to a recent 107,000 won, or nearly $93 a share.

However, late last year, Pfizer decided to scale back its ties to Celltrion, ending proposed marketing relationships on two other Celltrion biosimilars, for Roche’s arthritus drug Rituxan and breast cancer drug Herceptin. Pfizer looks interested in developing its own in-house biosimilar division. Ghost Raven says that a Herceptin biosimilar, which Celltrion is still developing and is not approved in the U.S., accounts for nearly 18% of the sales Celltrion has booked to one of its marketing subsidiaries.

Celltrion commented on the Ghost Raven research last week, saying that its drug has been officially approved in 70 countries and is “is selling in the global market through reliable partner companies such as Pfizer and Mundi Pharma.”

“We believe that the short sellers of Celltrion stocks must have taken huge losses, and they are circulating these false reports to recover their damages,” the company said in a statement. The company did not respond to Fortune‘s requests for further comment.

In the past, Celltrion’s Jung-jin has said that his company is misunderstood, and that the way the company books its sales are in line with standard accounting practices in his country.

Also unclear: Who or what Ghost Raven Research is. The report criticizing Celltrion appears to be the first Ghost Raven has put out. A disclaimer with the report states that Ghost Raven along with its “members, partners, afﬁliates, employees, and/or consultants” have been shorting the shares of Celltrion, mean it stands to benefit if shares of the biosimilar company go down.

Of course, plenty of short sellers publicize their bets, trying to drive down the prices of companies in their their portfolios. Bill Ackman has been publicly accusing Herbalife of fraud for several years. Although Herbalife (HLF) recently said it had overstated some membership figures, the company has not been charge with any wrong-doing. Executives there have repeatedly stated that Ackman’s claims are false or unfair. The company’s shares recently have been rising.

(For more on Herbalife and Ackman: The Siege of Herbalife)

The one big difference: Short-sellers normally often identify not only their positions, but themselves too. Ghost Raven hasn’t yet come forward.