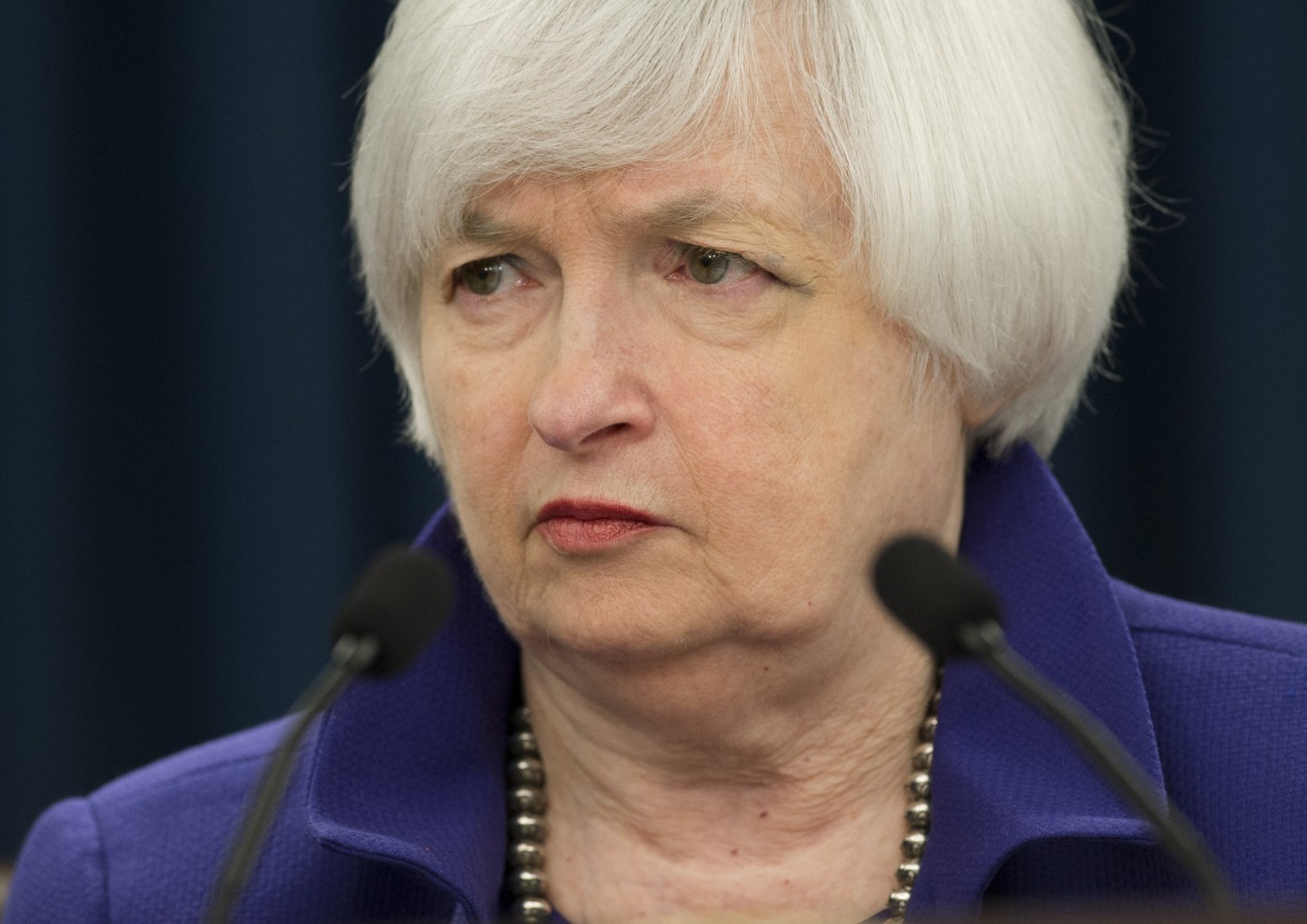 Federal Reserve Chair Janet Yellen speaks during a press conference following the announcement of an historic rate increase, the first since 2006, in Washington, DC, December 16, 2015. The Federal Reserve announced Wednesday its first interest rate increase in more than nine years in a landmark move signaling the US has finally moved beyond the 2008 crisis. The Fed raised the benchmark federal funds rate, locked near zero since the Great Recession, by a quarter point to 0.25-0.50 percent, saying the economy is growing at a moderate pace and should accelerate next year. AFP PHOTO / SAUL LOEB / AFP / SAUL LOEB (Photo credit should read SAUL LOEB/AFP/Getty Images)
SAUL LOEB—Getty Images

Wall Street stock futures are lower, taking their lead from global stock markets that don’t like the sharp decline in the dollar that followed the Federal Reserve’s gloomier assessment of the economy Wednesday. That outlook was echoed by central banks elsewhere Thursday, with Indonesia’s and Norway’s cutting their key rates and Switzerland’s cutting its growth outlook.

Oil prices, however, have rallied over 1.5% despite the Fed’s caution, as major producing nations meet to coordinate their output for the first time since late 2014.

Today’s must-read story is from Fortune‘s Stephen Gandel, who breaks down the reasons why the Federal Reserve’s decision to lower its longterm interest rate forecast could be a sign of overconfidence.

2. Kremlin doesn’t see the funny side of Trump’s ad.

The Kremlin on Thursday hit out at a pre-election video promoting U.S. presidential candidate Donald Trump, complaining it demonized Russia’s image. “I saw this clip. I do not know for sure if [President] Vladimir Putin saw it. [But] our attitude is negative,” Kremlin spokesman Dmitry Peskov told a teleconference with reporters.

Adobe Systems (ADBE) is expected to report first-quarter revenue and profit that outpaces Wall Street’s forecasts, as the software company saw a strong uptick in subscribers for its Creative Cloud software package. The company has mostly finished its transition from a heavy dependence on software licensing to a focus on web-based subscriptions.

The Labor Department is expected to report that the number of Americans who filed new applications for unemployment benefits last week increased from the week before. Weekly jobless claims likely increased by 9,000 last week, to 268,000 claims, after the number of claims hit a five-month low earlier this month.

The NCAA Tournament’s first round kicks off today for the final 64 teams that have punched a ticket to the big dance. Games are set to take place in locations across the country through the weekend, with potential Cinderellas such as Austin Peay and Yale angling to topple some of the biggest men’s college basketball programs in the country. The top seeds in this year’s tournament are Kansas, North Carolina, Oregon, and Virginia. No matter which teams make it to the Final Four this year, television networks will be among the tournament’s biggest winners, as the tournament typically generates more than $1 billion in advertising revenue each year.