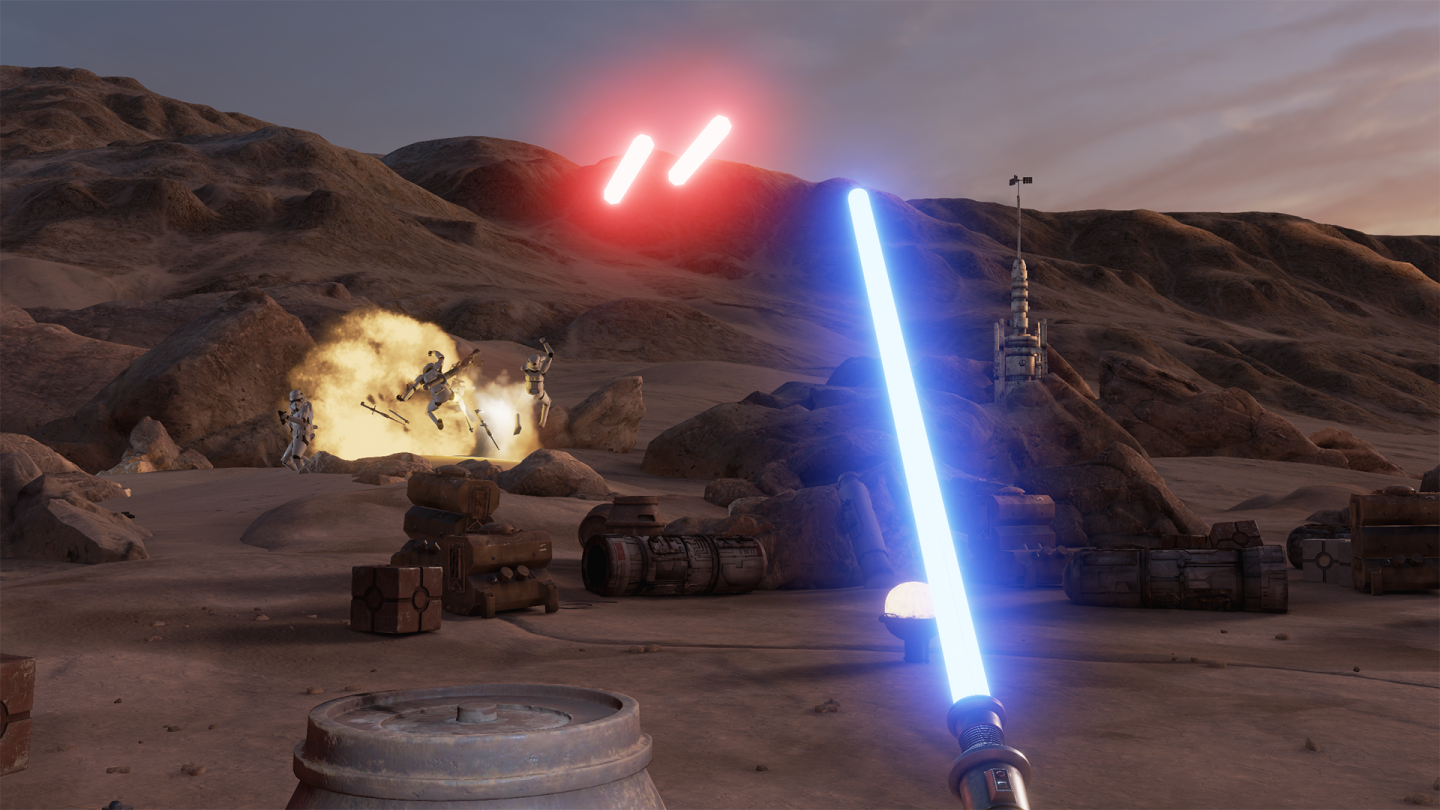 ILMxLab premiered its first virtual reality experience for the HTC Vive at the Letterman Digital Arts Center during the Game Developers Conference (GDC) in San Francisco this week.

Developed using Epic Games’ Unreal Engine 4 game technology, Trials on Tatooine begins in outer space with the traditional Star Wars score and block yellow text in the opening scroll. But only in virtual reality can viewers reach out and touch the words.

According to the game’s intro, Luke Skywalker has sent Han Solo and R2-D2 aboard the Millennium Falcon to his home planet of Tatooine to deliver a package to a Jedi apprentice—meaning you, the gamer in VR.

The action takes place on the desert planet, where the Falcon flies in and lands right beside you. You can literally feel the ship landing and kicking up air at you, courtesy of real fans circulating in the room. R2-D2 comes down the ramp as Han Solo shouts from inside the Falcon. (It’s not the voice of Harrison Ford, but actually that of The Walking Dead actor Ross Marquand, who sounds just like him.). As is usually the case with the beat-up Corellian freighter, there’s a problem with the ship and you have to help out. Using your own HTC Vive controller, which appears in the game world as a worn-out tool, you must pull down a ramp to give R2-D2 access to a generator and then hit a sequence of colored lights to get it powered up.

In the meantime, a pair of Imperial TIE fighter attacks force you to dodge laser fire. After Han takes them out with the Falcon’s guns, an Imperial Shuttle lands and unleashes a squadron of storm troopers. Fortunately, that package Luke sent you was a lightsaber. With the press of a button, the saber whooshes to life and you use the Jedi weapon to protect the gang and the Falcon from laser fire, sending incoming laser fire back at the stormtroopers.

The whole experience is only about five minutes long, but it seems like you’re on the planet surface for longer because you’re completely immersed. You can walk around, reach out, and touch things. Artoo is right there by your side. The gameplay with the lightsaber works so naturally with the Vive controller that you could envision entire game experiences using it.

According to Rob Bredow, who is head of ILMxLab and chief technology officer at Lucasfilm as well as the director of this Star Wars virtual reality experience, VR was made for holding a lightsaber, so that was the focus for development.

Roughly half of his team at ILMxLab comes from the video game industry, while the other half stems from other film and special effects fields. After years of talk in Hollywood about the convergence of movies and video games, virtual reality has finally made that dream a reality. Even though this Trials on Tatooine is just a short experiment using the Vive, Bredow posits it offers a good example of the type of experiences this new medium opens up for his team.

At GDC, Sony announced that Electronic Arts is working with Lucasfilm and DICE on an exclusive PlayStation VR Star Wars Battlefront game for this fall. This game will take some of the concepts from Trials on Tatooine to a full gameplay experience.

ILMxLab was able to create this playable demo in about nine months while also developing other projects simultaneously. Bredow’s team was also responsible for the recent Star Wars Holo-Cinema that debuted at the Sundance Film Festival in January. That augmented reality experiment allowed multiple people to stand in a room enveloped by giant wall and floor projection screens, depicting scenes of the Jakku desert from The Force Awakens. By wearing special 3D glasses, C3-PO and BB-8 come out of the walls and into the room.

ILMxLab is Lucasfilm’s laboratory for immersive entertainment with a team comprised of Lucasfilm, ILM, and Skywalker Sound engineers, artists, and special effects wizards. Aside from the aforementioned projects, ILMxLab is also the team behind The Force Awakens-Facebook 360 experience that Mark Zuckerberg unveiled at the Facebook F8 Developers Conference last year. The unit also developed VScout, which was showcased at Oculus Connect 2 in Los Angeles last year. Rogue One director Gareth Edwards used this virtual reality technology to enter computer-generated sets in pre-production for the upcoming anthology film.

With the launch of Facebook’s Oculus Rift and the HTC Vive for consumers, the lab now has a new audience to target with home experiences. If this first Star Wars HTC Vive proof of concept is any indication of what’s possible, fans will never want to leave the virtual world—unless it’s to catch the 3D IMAX version of the latest Star Wars movie.