The Middle-Class Jobs At Stake in Tuesday’s Florida Primary 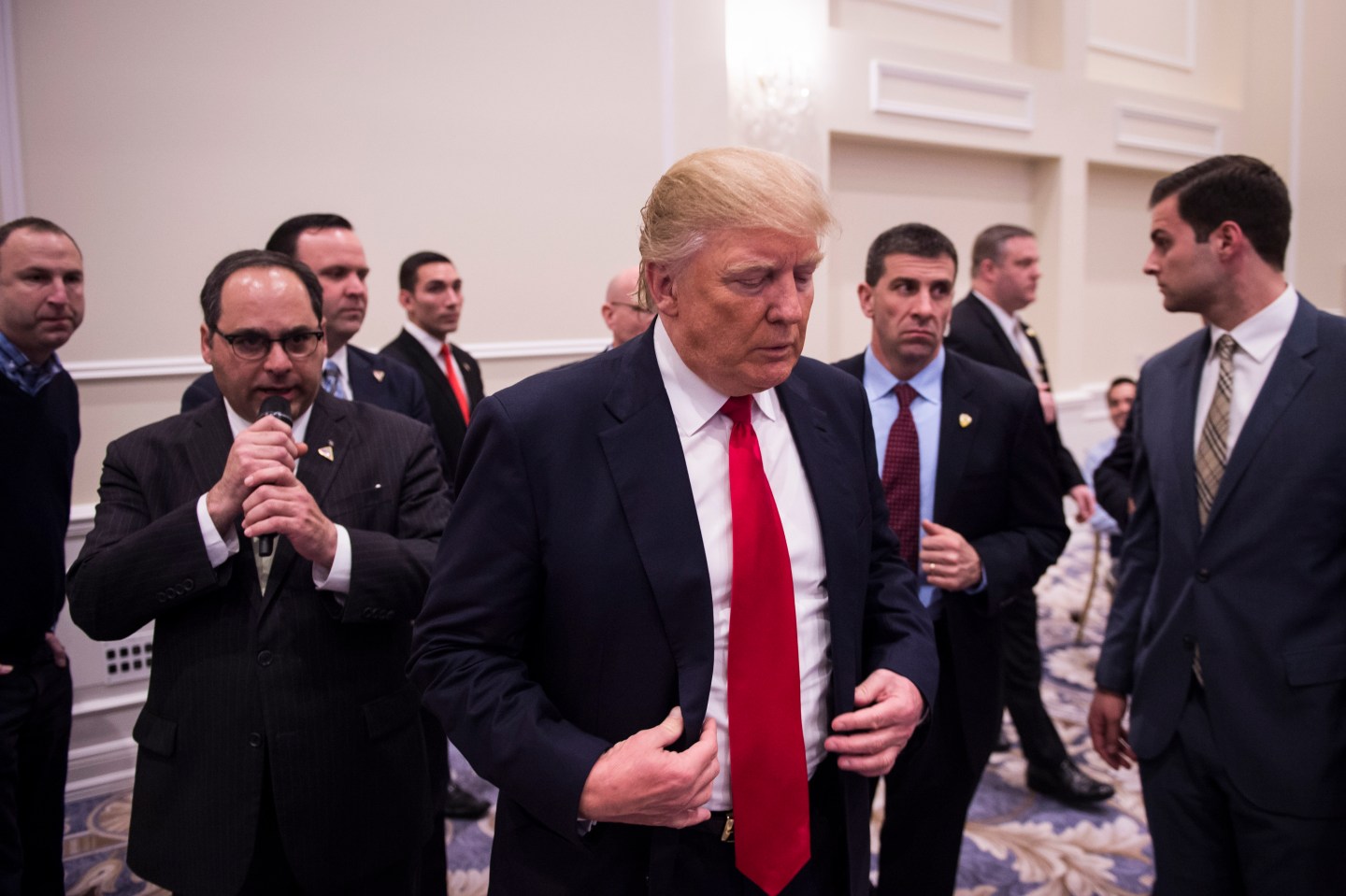 When the primary season started, Donald Trump turned the Republican race into a referendum on whether the U.S. should build a wall overlooking the Rio Grande. Now the immigration fight has shifted, and the talk about walls is giving way to fights over foreign workers who take U.S. tech jobs under the so-called H-1B visa program.

The debate over these visas—whether they have been abused, whether they should exist at all—will be central to the outcome of the Florida GOP primary. Workers have accused Disney, whose Cinderella Castle has been a symbol of Florida for 40-plus years, of cutting costs by replacing longstanding technology employees with workers from abroad (and, notoriously, of asking those employees to train their own replacements).

The use of H1-Bs to bring in cheaper labor have led to protests and lawsuits, and even managed to snare Trump himself in a series of rapid-fire flip-flops (first he was against them, then he was “changing,” now he wants to ban them again). Here’s a primer on what the controversy is all about.

So what’s an H-1B, anyway? Some 85,000 of these visas are given out each year to foreign workers with college (and in many cases, advanced) degrees. It’s essentially a guest worker program—but unlike similar programs for seasonal workers, it affects mainly white collar jobs. The majority of H-1Bs go to technology workers, mainly from India.

There’s no definitive count of just how many workers are in the U.S. on H-1Bs. But each visa is valid for an initial period of three years, and can be extended for three more, so the current total is thought to be in the hundreds of thousands.

The regulations governing H-1Bs do include some protections for American workers: Companies must attest that they won’t be used to hurt U.S. workers. Marco Rubio, a supporter of the program, alluded to this in last week’s debate.

How does this play out in the real world? But it turns out those rules are very easy to get around. In particular, the rule against using H-1Bs to displace U.S. workers has a Grand Canyon-sized exception: It doesn’t apply to anyone paid $60,000 a year or more. That number was set way back in 1998 and seems to have been adopted under the assumption that subcontractors that might replace U.S. workers en masse didn’t deal with employees senior enough to earn that much. That’s clearly no longer the case. The effects of inflation, rising tech salaries, and the increased sophistication of outsourcers leaves many American technology professionals vulnerable to being replaced by H-1Bs—who, not coincidentally, tend to be paid just over the $60,000 mark.

Supporters of H-1B visas often argue that cutting-edge U.S. tech companies need them to bring in elite talent from around the world. In practice, few of the visas actually go to top American tech companies for this purpose. More than three-quarters of H-1B visas require only a bachelor’s degree. And the Googles and Facebooks of the world—who compete for H-1B visas in a lottery with specialized outsourcing companies that are mainly concerned with cutting costs—often turn to other programs designed to enable top grads stay in the U.S.

The upshot is that a disproportionate number of the visas go to the outsourcing companies, which apply for massive numbers of workers who travel from India to fill spots at U.S. companies. (You can see the startling findings on this from Roni Hira, an academic researcher, here.) These tend to be companies that need a steady supply of tech workers to keep their systems running—updating software, for instance, or writing programs for specialized applications—but aren’t pushing the technology envelope. And those spots have mostly been held by American workers.

Disney is the best publicized case, giving the H-1B debate a special resonance in Florida. But it’s a national issue: Employees of the New England utility Eversource Energy, for instance, say much the same thing happened there, a story that’s been detailed by Patrick Thibodeau at Computerworld.

Companies that outsource jobs say that they don’t decide what workers get fired, pointing the finger at the consultancies they hire to do it for them. An Eversource spokesperson said that the company only eliminated routine, not strategic, jobs to specialized tech vendors, and referred questions about how many jobs were handled by H-1B visa holders to its outsourcing firms.

But it appears that in many cases we’re talking about fairly senior positions. I spoke to one ex-employee of Eversource (who asked not to be named because of agreements he made with the company to preserve his severance pay) who says that the mass replacement of workers included software developers and security experts.

How is this different from what happened at Donald Trump’s Mar-a-Lago? Among Donald Trump’s many businesses is a glitzy country club in Palm Beach, Fla. As Charles Bagli and Megan Twohey reported in the New York Times, most of Mar-a-Lago’s workers arrive on H-2B visas, a category used for low-skilled temporary workers. Surprisingly, the requirements for the H-2B visa are in some ways stricter: Would-be H-2B employers have to attest that they can’t find U.S. workers for the jobs they need to fill. The H1-B rules usually don’t even require employers to try to make hires from within the United States.

The key difference between controversies over H-1B and H-2B visas is that the latter has catalyzed reaction from well-educated, upper-middle-class workers who vote in larger numbers. Trump himself acknowledged using foreign worker visas in last Thursday’s debate—but issued a statement afterwards vowing: “I will end forever the use of the H-1B as a cheap labor program, and institute an absolute requirement to hire American workers first for every visa and immigration program. No exceptions.”

Why are politicans suddenly turning against H-1Bs? Until recently many in Congress were pushing for an expansion of the H-1B program, bolstered by arguments about the need for elite tech talent in the U.S. In 2013, 68 senators (including Rubio) voted for an immigration bill that would have expanded the H-1B program. It was never enacted; around that time Disney and other companies were revealed to be using H-1Bs largely to secure inexpensive labor.

Now it’s hard to find a prominent politician who will defend it, and the debate is largely about how to roll it back. At the end of last year, legislators doubled (to $4,000) the fee that large outsourcers pay the federal government for each one. Once vigorous supporters of H-1B expansion like Connecticut senator Richard Blumenthal are now talking about fixing H-1Bs and investigating abuses. And some of the latest proposals on the table—like Ted Cruz’s call to raise the minimum H-1B salary to $110,000 year—would pretty much kill the program in its current form.

What’s the impact of H-1Bs on the presidential race? Donald Trump seems to have gotten an outsized share of support from the (many) tech workers worried about getting replaced by H-1B visa holders. In Florida, he got the public endorsement of Leo Perrero, a programmer laid off by Disney who has become one of the most outspoken critics of the program. Trump may have waffled during the March 3 debate, but his supporters don’t seem very bothered by the inconsistency. Some who posted on Twitter that Trump had lost their votes have already come back around. Meanwhile, his latest position on H-1Bs may be earning him the support of educated voters who might not naturally gravitate to him.

On the Democratic side, attention to the issue has likely helped Vermont Senator Bernie Sanders, a critic of H-1Bs and advocate for much stricter regulations that would ensure foreign workers were paid U.S.-level wages.

As with so much in this race, the H-1B fight has made a mess of traditional partisan boundaries. The ex-Eversource worker I spoke to said that if it ever came down to a Trump-Bernie race, he’d really have a hard choice in the voting booth.