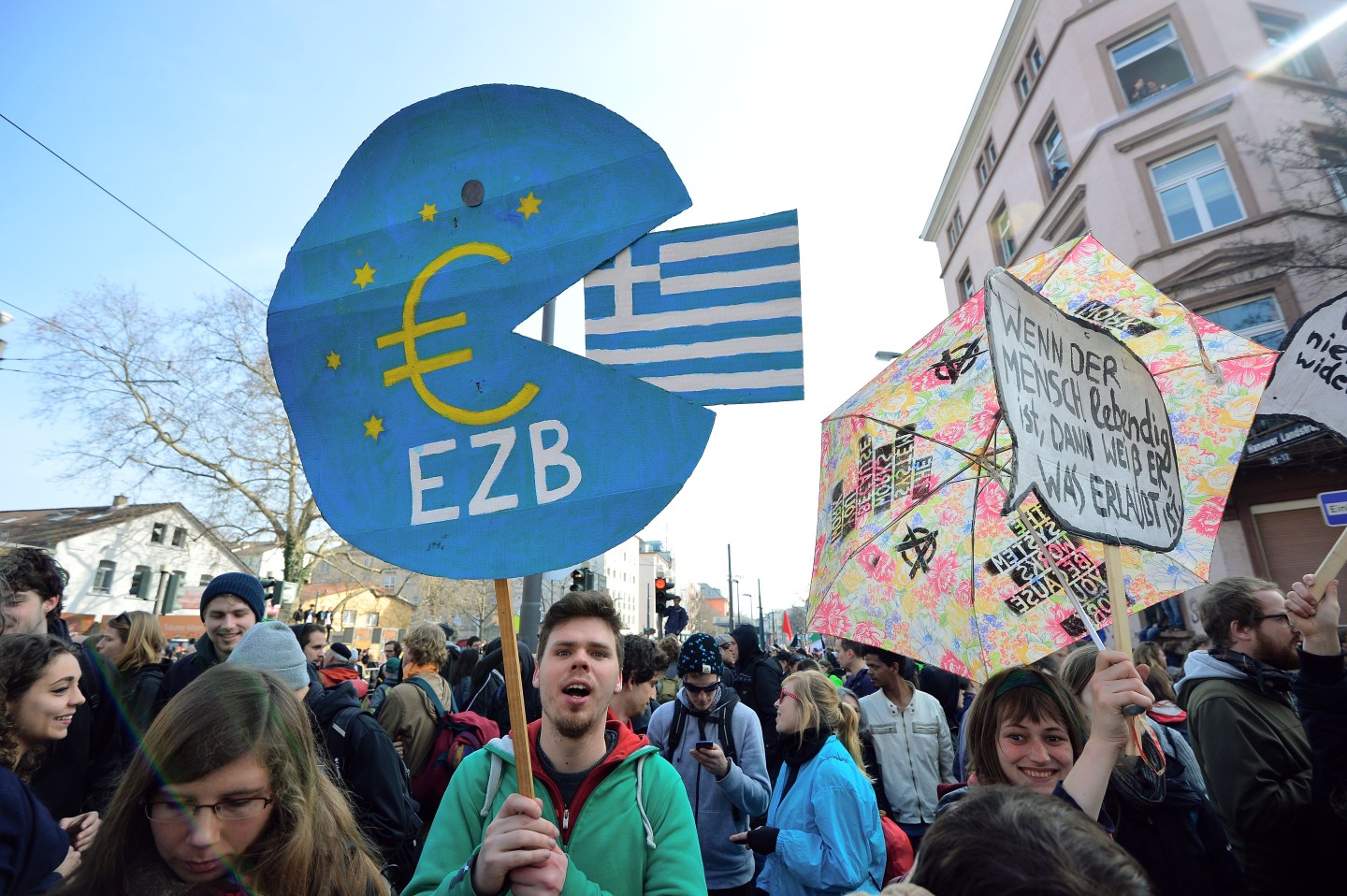 FRANKFURT AM MAIN, GERMANY - MARCH 18: Activists march in a demonstration organized by the Blockupy movement to protest against the policies of the European Central Bank (ECB) after the ECB officially inaugurated its new headquarters earlier in the day on March 18, 2015 in Frankfurt, Germany. At least 10,000 protesters were expected to take part at riot police equipped with water cannons established a wide security perimeter around the ECB site. (Photo by Thomas Lohnes/Getty Images)
Photograph by Thomas Lohnes — Getty Images

Desperate times call for desperate and somewhat speculative measures. The European Central Bank (ECB) cut its deposit rate last Thursday, pushing it deeper into negative territory. The move is not unprecedented. In 2009, Sweden’s Riksbank was the first central bank to utilize negative interest rates to bolster its economy, with the ECB, Danish National Bank, Swiss National Bank and, this past January, the Bank of Japan, all following suit.

The ECB’s latest move, however, was coupled with the announcement that it would also ramp its Quantitative Easing measures by increasing its monthly bond purchases to 80 billion Euros from 60 billion Euros — a highly aggressive policy shift. The fact that the ECB has adopted this approach raises two key questions: What are the risks? And, if the policy fails, what other options are left?

Negative rates are an attempt by the ECB to prod commercial banks to lend more money to businesses and consumers rather than maintain large balances with the Central Bank. In essence, it is forcing the banks to leverage its balance sheet to a higher level or the ECB will penalize the banks by charging interest on their deposits. Historically, such a practice would be highly inflationary, however, with oil prices falling to record lows combined with a slowdown in global growth, inflation is not feared. In fact, inflation is desired at a manageable level, as this would promote near-term growth in the economic markets.

This does not mean, however, that the ECB’s policy does not present risks. First, if the commercial banks decide to pass on the cost of the negative rates to their customers — in other words, they charge customers for keeping their savings in the bank in the same way central banks are now charging the commercial banks for keeping their money – the customers might simply withdraw their savings. In a worst-case scenario, this could create a run on the banks in Europe with customers hoarding their money rather than paying interest on deposits. This would inhibit the free flow of funds through the financial system — ironically, the very reason that negative interest rates were implemented in the first place.

Conversely, if the banks continue to absorb the costs, it could cut deeply into their profits. Even a tenth of a percent on billions of dollars adds up and can mean the difference in profit or loss in a major commercial bank. To date, the effect negative interest rates have had on bank profits have put downward pressure on the majority of bank stocks, which in turn, has depressed the European and global equity markets.

Negative interest rates also have a profound impact on the foreign exchange markets. Interest rate differentials from one currency to another drive the future value of currencies and as the ECB lowers rates into more negative levels, this puts downward pressure on the European Currency Unit (ECU). This may improve near-term EC trade

exports from the region. However, capital flight from the lower interest rate ECU markets to more favorable returns in positive interest rate currencies is inevitable over time. Additionally, the U.S. Fed has clearly stated its intent to raise rates over the next year to eighteen months, thereby making the interest differential gap even greater and thus downward pressure on the ECU even more pronounced.

Something has to give and the ECB is painting itself into a corner with very few options left.

The European banks (most vocally, the German banks) are already objecting to current negative interest rate levels; the Euro continues to be negatively pressured by lower rates relative to other currencies due to interest rate differentials; and Quantitive Easing measures, a practice that was shunned by the ECB when the U.S. did its first round of Quantitative Easing in the 2007-2008 timeframe, has been ramped up by the ECB with no apparent material impact on economic growth.

In the face of continually lowering growth estimates, persistently high unemployment, and a possible Brexit, this is the last thing Europe needs.

Charles Kane is a senior lecturer in international finance and entrepreneurial studies at the MIT Sloan School of Management.