Mario Draghi Is Losing His Magic 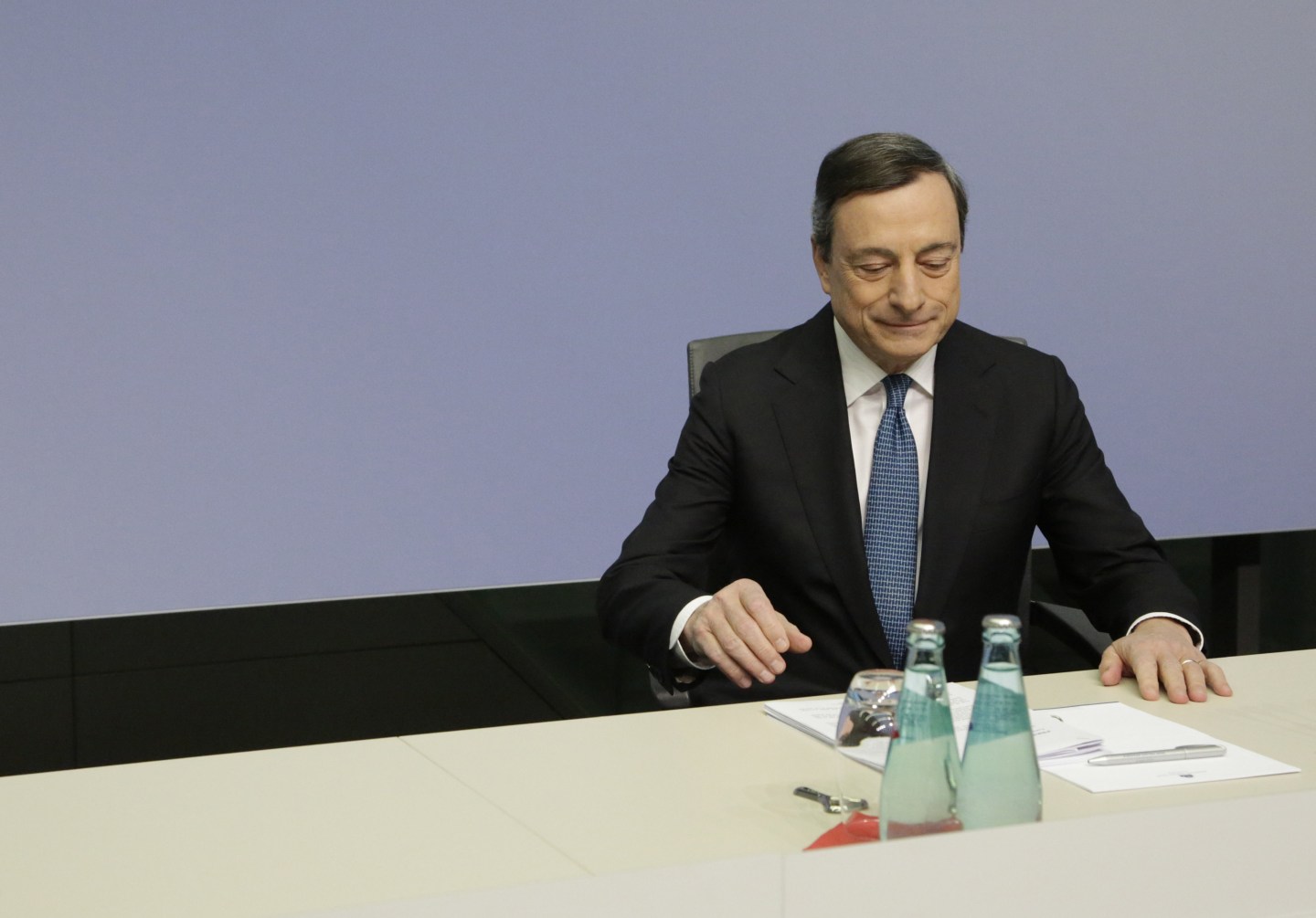 Mario Draghi’s press conference after the European Central Bank’s announcement Thursday was pretty much a perfect illustration of the fears that have been stalking financial markets in the last few weeks: fear that central banks have lost their power to help the economy, fear that they can no longer compensate for a lack of political leadership, fear that nobody has a convincing strategy to deal with the shock of China’s slowdown.

In the 45 minutes following the ECB’s introduction of even more stimulus to stave off deflation in a faltering Eurozone economy, everything had gone as its president would have wished. The euro fell by more than a cent against the dollar, bond yields fell, and stock prices rallied—especially stocks in the Eurozone’s battered banking sector.

But by the time Draghi had finished his presser explaining the bank’s actions, he had undone most of that work. The euro rose over two and a half cents to $1.1110, and the Euro Stoxx 50 had given up almost all of its gains. The only consolation was that bank stocks more or less held on to theirs.

It was the law of diminishing returns in action in real time.

So often, Draghi has delivered more than the markets expected or dared to hope for: most notably with his promise to do “whatever it takes” to save the euro in 2012 and his subsequent maneuvering to give substance to it over German objections. He pushed the German-influenced ECB out of its comfort zone with quantitative easing and negative interest rates.

On Thursday, after yet another rate cut, he tried again to say that the ECB can still do more, but his subsequent comments suggested an acceptance of the fact that the bank is running out of road. Further cuts will be difficult given the negative impact on a large part of the Eurozone’s banks, he acknowledged as he retreated into the minutiae of how monetary policy transmits to the real economy.

“His (honest) observation that there are limits to how low rates can go, and the lengths the ECB can go to, in terms of unconventional measures, served to undermine much of the ‘positive impact’ of what had been announced,” ADM ISI analyst Marc Ostwald wrote in a note.

The ECB has done more than any other Eurozone institution to buy time for governments to address the structural problems of their economies and for banks to repair balance sheets devastated by the 2008 financial crisis. It warned again Thursday—as it has done every month since the Greek crisis erupted six years ago—that “other policy areas must contribute decisively.” But there seems to be little chance of that as long as Wolfgang Schäuble, architect of six Eurozone bailout deals and eliminator of Germany’s own budget deficit, remains Finance Minister in Berlin and so long as Europe’s political leadership remains paralyzed and divided by the migrant crisis.

Draghi is out on a limb. And it’s showing.

What the ECB did Thursday: