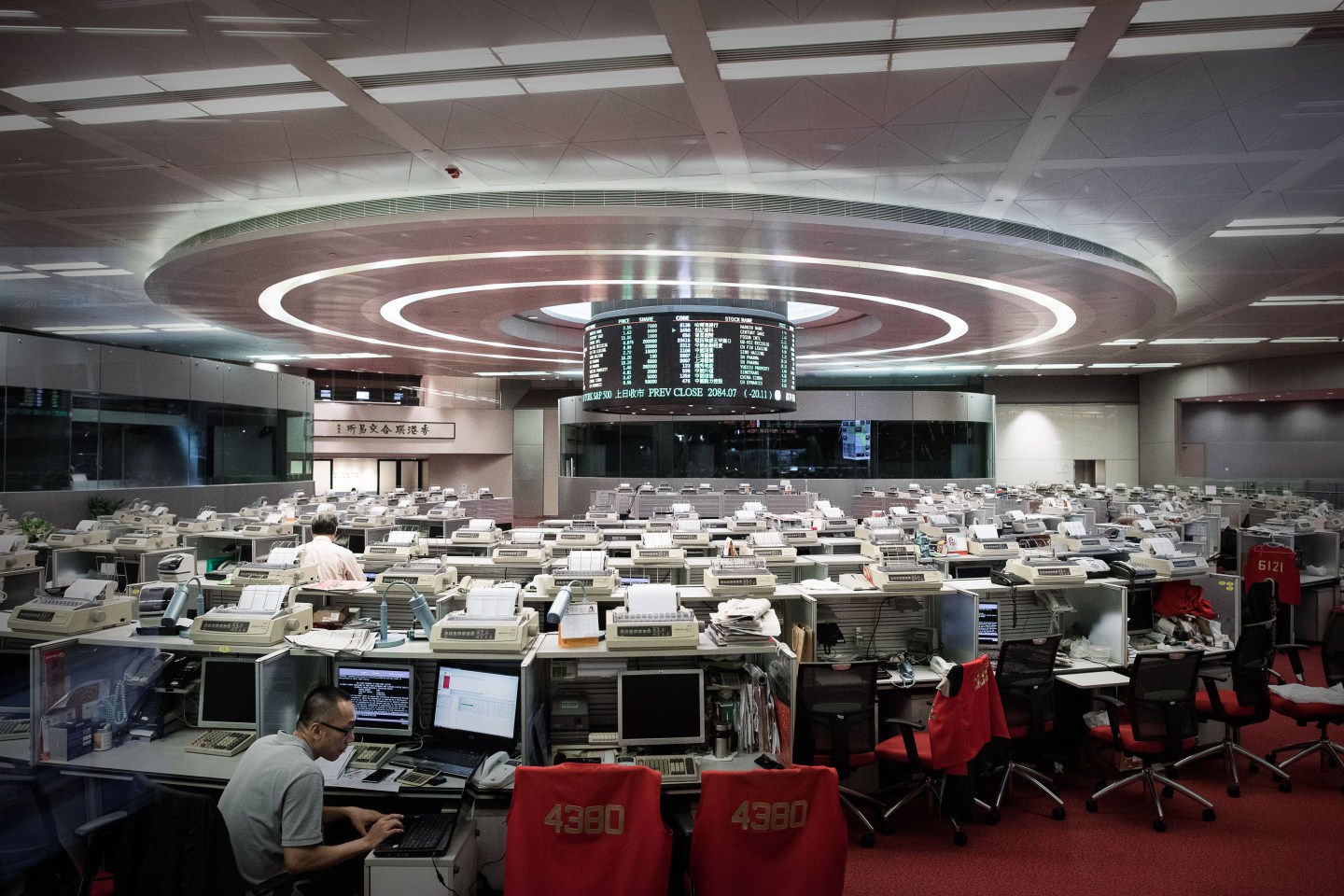 A trader is seen on the floor of the Hong Kong Stock Exchange on August 12, 2015. Asian shares tumbled on August 12 as investors fretted over the impact which a second cut in China's currency in as many days will have on economies closely tied to the Asian giant. AFP PHOTO / Philippe Lopez (Photo credit should read PHILIPPE LOPEZ/AFP/Getty Images)
Photograph by Philippe Lopez — AFP/Getty Images

Asian shares started the week higher on Monday, buoyed by gains on Wall Street, firmer crude prices and glimmers of strength in weekend data from China.

The S&P 500 ended at its highest level of the year on Friday as oil prices climbed further and investors reassessed stimulus steps taken by the European Central Bank last week.

MSCI’s broadest index of Asia-Pacific shares outside Japan was up 0.4%, while Japan’s Nikkei stock index added 1.5%.

The Bank of Japan’s two-day policy meeting begins on Monday. Policymakers were set to discuss this week whether to exempt $90 billion in short-term funds from the BOJ’s newly imposed negative interest rate, people familiar with the matter said, after the securities industry warned that investment money would be driven into bank deposits.

The BOJ is seen likely to stay on hold after adopting negative interest rates at its meeting in late January. The U.S. Federal Reserve and the Bank of England are also seen standing pat at their respective meetings later this week, in the wake of the ECB’s move to expand its easing program.

Data released before the market opened showed Japan’s core machinery orders rose a more-than-expected 15.0% in January from the previous month.

Chinese data released on Saturday, meanwhile, showed continuing weakness in other key parts of the economy, but also contained a few bright signs. Manufacturing output in January and February grew at its weakest pace since 2008, while retail sales rose at their slowest rate since May 2015.

For more on Asia-Pacific, watch:

But fixed-asset investment, a crucial driver of the economy, gained 10.2% in the first two months compared with the same period a year earlier.

“Chinese data out over the weekend showed further weakening across the board, but it is clear that government spending and a recovery in the real estate market are helping hold up growth,” Angus Nicholson, market analyst at IG Markets, said in a note to clients.

“China looks to be returning to a very familiar investment and real estate-driven growth pattern, somewhat at odds with their claims of economic rebalancing,” he said.

People’s Bank of China (PBOC) Governor Zhou Xiaochuan said over the weekend that central bank won’t resort to excessive stimulus to bolster growth but will keep a flexible stance in the event of an economic shock.

The dollar was steady against a basket of currencies, with the dollar index .DXY at 96.216, holding above a one-month low of 95.938 touched on Friday.

Against the yen, the dollar edged down slightly to 113.82 though it remained within its recent ranges.

Crude oil prices were lower on Monday, after marking sharp gains on Friday after the Paris-based International Energy Agency said the market may have hit bottom.

Brent LCOc1 edged down about 0.1 percent to $40.34 a barrel after gaining nearly 1% in the previous and 4% for the week, its third weekly gain in a row.