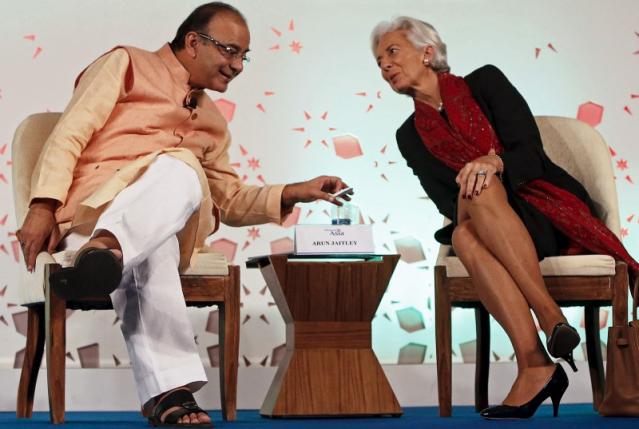 Unconventional monetary policies of central banks in Europe and Japan received an endorsement from the International Monetary Fund on Sunday, even as policymakers from emerging markets warned that such policies were increasing risks for the global economy.

The debate over the merits of unconventional policies comes days before major central banks such as the U.S. Federal Reserve, the Bank of England and the Bank of Japan unveil their interest rate decisions.

At the conclusion of a three-day IMF event in New Delhi, the fund’s chief, Christine Lagarde, said countries should continue with unconventional monetary policies if they were accompanied by structural reforms and low inflation.

“Monetary policy is needed but (it) cannot be the only game in town,” Lagarde said.

Speaking at the same event on Saturday, India’s central bank chief Raghuram Rajan, a vocal critic of such policies, had said that the costs of them were increasing even as the benefits seemed to be diminishing.

For more on the IMF, watch:

He called on global central banks to adopt a system for assessing the wider impact of their actions, including unconventional monetary policies now in use.

The European Central Bank recently eased monetary policy further by cutting all its main interest rates, expanding asset purchases and launching a loan program which could see it pay banks to lend to firms and households.

The Bank of Japan has also taken interest rates into negative territory for the first time while the U.S. Federal Reserve is expected to tighten monetary policy only gradually after years of near-zero rates and quantitative easing.

Rajan proposed that a group of academics should measure and analyze the “spillover” effects of monetary policies and indicate which should be used and which avoided. He suggested a traffic light system, grading policies green, orange or red.

The monitoring system could be implemented through an international agreement along the lines of the Bretton Woods currency accord or via the IMF, he added.

Although Lagarde avoided commenting on the merits of the proposal, the Indian central banker’s idea struck a chord with policymakers from other emerging markets.

Sukudhew Singh, deputy governor at Bank Negara Malaysia, said the proposal was worth looking at.

“We need to first assess how these policies are affecting, what kind of distortions are being created,” he told Reuters. “Only then, we can look for remedial measures.”

While negative interest rates in Europe and Japan are bringing yield-chasing investors into emerging markets, their policymakers fear further interest rate increases in the United States could ignite massive outflows.

When Rajan took over as Reserve Bank of India governor in September 2013, India and other emerging economies such as Indonesia and Brazil were battling a currency crisis sparked by fears the U.S. Fed would begin tightening policy, exposing their crippling current-account shortfalls.

That experience has made them strong critics of the kind of stimulus measures adopted by developed economies in recent years.

Chatib Basri, who was Indonesia’s finance minister then, said the 2013 currency crisis could be repeated in 2017 unless imbalances created by ultra-easy monetary policies were addressed.

Since mid-2013, several emerging economies including India have taken steps to shore up their forex reserves, improve public finances and narrow big current account deficits in a bid to shield themselves from any external shock.

But big sell-offs recently in their financial markets have called into question the conventional wisdom that “getting your house in order” guarantees safety.