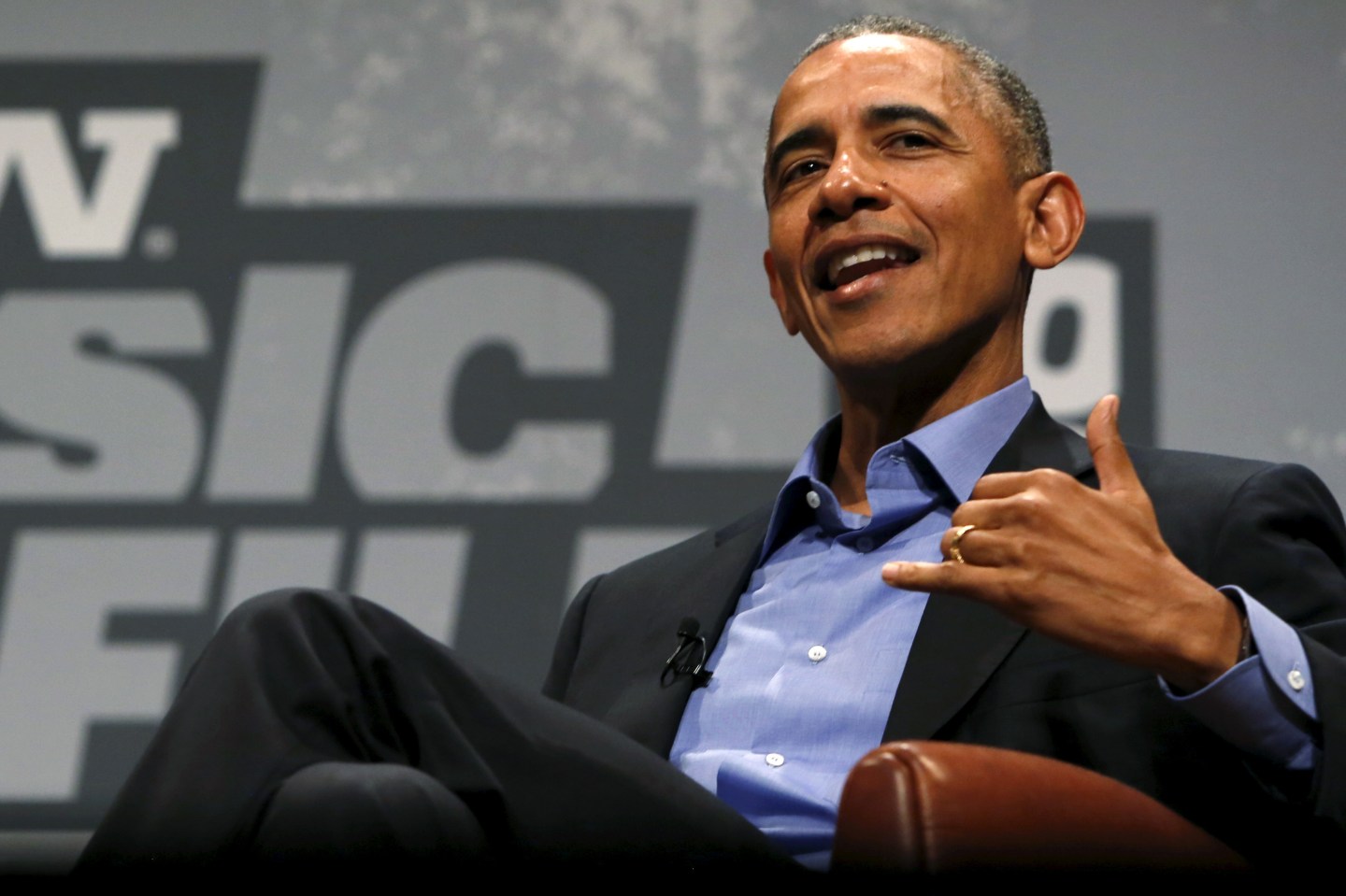 Amid a fight between one of the biggest tech companies and the federal government, President Barack Obama called for cooperation during an appearance at the South by Southwest technology conference in Austin on Friday.

Apply your skill and technology to the greater good of the country, he told the tech community. “The reason I’m here, really, is to recruit all of you,” Obama said, addressing an auditorium filled with some of the festival’s attendees.

Obama’s comments come as his Justice Department and the FBI fight Apple over access to data on an iPhone used by one of the San Bernardino shooters. Apple’s refusal to help because of broader privacy concerns has put a wedge between his administration and much of the technology industry.

He declined to address the legal battle directly. But he did voice support for giving government a way to get around encryption in investigations.

“If the government can’t get in, then everybody is walking around with a Swiss Bank account in their pocket,” he said, referring to the current iPhone tussle. He warned against the “fetishizing” of phones over national security values while saying he understood the importance of privacy and its roots in American values.

“Now, technology is evolving so rapidly that new questions are being asked, and I am of the view that there are very real reasons why we want to make sure that the government can not just willie nilly get into everybody’s iPhones, or smartphones, that are full of very personal information and very personal data,” Obama said.

As expected, the president spent a good portion of his conversation on stage promoting the importance of government and the benefits of helping it. In particular, he highlighted government initiatives that have recently improved important services like the process for applying for student loans.

Obama also addressed a question about frustrations with government’s slow speed or messy systems by bringing up the disastrous launch of healthcare.gov, the federal health insurance exchange website. Although the site’s outages were “a little embarrassing for me because I was the really cool early adopter president,” he said, it was the skilled response by a team of technologists his administration created that showed government could be nimble and effective.

“The folks who are working in digital services, they’re having a great time,” Obama added in a bid to make government work sound as exciting as the snack-filled offices of Silicon Valley.

For more about President Obama, watch:

As the next presidential election approaches, Obama also addressed civic engagement and voting—a key pillar not only of the country’s democratic roots, but also in seeing the changes that citizens often say aren’t happening. That includes griping by the technology industry.

“We’re the only advanced democracy in the world that makes it harder for people to vote,” Obama said. “You’re laughing but I’m serious. It’s easier to order pizza than it is to vote.”

Obama also hinted that U.S. entrepreneurs have spent more time solving minor annoyances and pushing luxury instead of the major problems facing the country. As he delivered his talk at a tech festival known as a springboard for services like Twitter and Foursquare, he reminded his audience of the impact technology could have.

Obama also delivered a polite but stern reality check to his audience of innovators and world-changers, a reminder of the differences between his job and theirs.