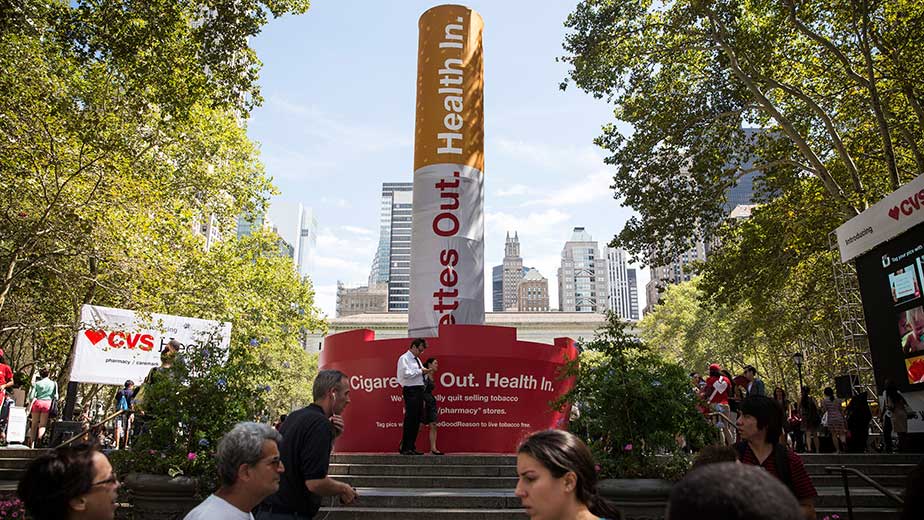 NEW YORK, NY - SEPTEMBER 03: CVS announced it had completed removing cigarettes and other tobacco products for sale from its store a month before its October 1st deadline by "putting out" a 50-foot tall cigarette in Bryant Park on September 3, 2014 in New York City. (Photo by Andrew Burton/Getty Images)
Photograph by Andrew Burton — Getty Images

CVS Health (CVS) is taking it to the tobacco industry again.

The company said on Thursday it will fund a new $50 million multi-year anti-smoking campaign, its latest effort to bolster its image as a healthcare-first company.

CVS made big headlines in February 2014 when it announced it would stop selling cigarettes and other tobacco products in its 8,000 drugstores, foregoing $2 billion in annual sales. The move won praise from many corners (First Lady Michelle Obama attended a 2014 event to mark CVS’s tobacco exit). It also gave CVS, which operates the second-largest pharmacy benefits manager (PBM), Caremark, a boost as it repositioned itself to the public. (The company changed its name from CVS Caremark to CVS Health at about the time the last of cigarettes disappeared from store shelves in September of that year.)

The company said on Thursday it would provide funding over five years to leading anti-tobacco and youth-oriented programs with a view to further reducing tobacco use among young people, under the name “Be the First,” a reference to the goal of making today’s youth the first tobacco-free generation.

Smoking rates have sharply declined over the past decade — from 20.9% of American adults in 2005 to 16.8% in 2014, according to the Centers for Disease Control and Prevention. But some healthcare advocates fear that the rise of e-cigarettes, seen by some as potential gateway to smoking, and other factors could send rates back up.

CVS and its philanthropic arm, the CVS Health Foundation, will provide funding for programs led by the American Academy of Pediatrics, the Campaign for Tobacco-Free Kids and educational publisher Scholastic, as well as the American Cancer Society and the National Urban League. CVS itself will continue to offer smoking cessation products and tobacco-education services in its stores. (CVS now runs 9,600 retail pharmacies, after taking over Target’s (TGT) pharmacy business late last year.)

The tobacco-exit and the new campaign are at least partly designed to help CVS ride the healthcare boom to the benefit of its fast-growing PBM, which processes prescription-drug programs for big companies and health insurers, and CVS’s specialty pharmacy businesses.

In contrast, CVS’s pharmacy services revenues rose 13.5%. (That side of the business eclipsed CVS/pharmacy retail in 2011; overall, CVS brought in $153.3 billion in revenue in 2015.) CVS told investors in December it expects the PBM revenues to hit $121.5 billion this year, more than double 2011 levels. CVS bought Caremark in 2006.

The announcement comes as CVS gears up for its PBM “selling season,” the time of year when it tries to land new Caremark contracts with big employers and health plans. Last year, CVS held on to 98% of its PBM contracts and lined up $11.5 billion worth of new business, helping it hold its own against top PBM Express Scripts (ESRX).

CVS sees itself as a one-stop shop, with its PBM and drugstore feeding business to each other, as detailed in a Fortune feature last summer. The idea also is that a robust PBM business raises the odds that Caremark members will choose to get their prescriptions filled at a CVS rather than a Walgreens (WBA) or a Rite Aid (RAD). And that ultimately could more than make up for the traffic drop from the cigarette ban.

So a reminder of CVS’s anti-cigarette stance (Walgreens and Rite-Aid continue to sell smokes) now can only help.

“Further demonstrations like this of our ongoing commitment to public health continue to burnish our image with those clients,” says Brennan. Still, he adds, CVS’s efforts to lower drug costs for those clients’ employees and members are more important than the anti-smoking moves. “It helps at the margin,” he said of CVS’ anti-smoking advocacy.