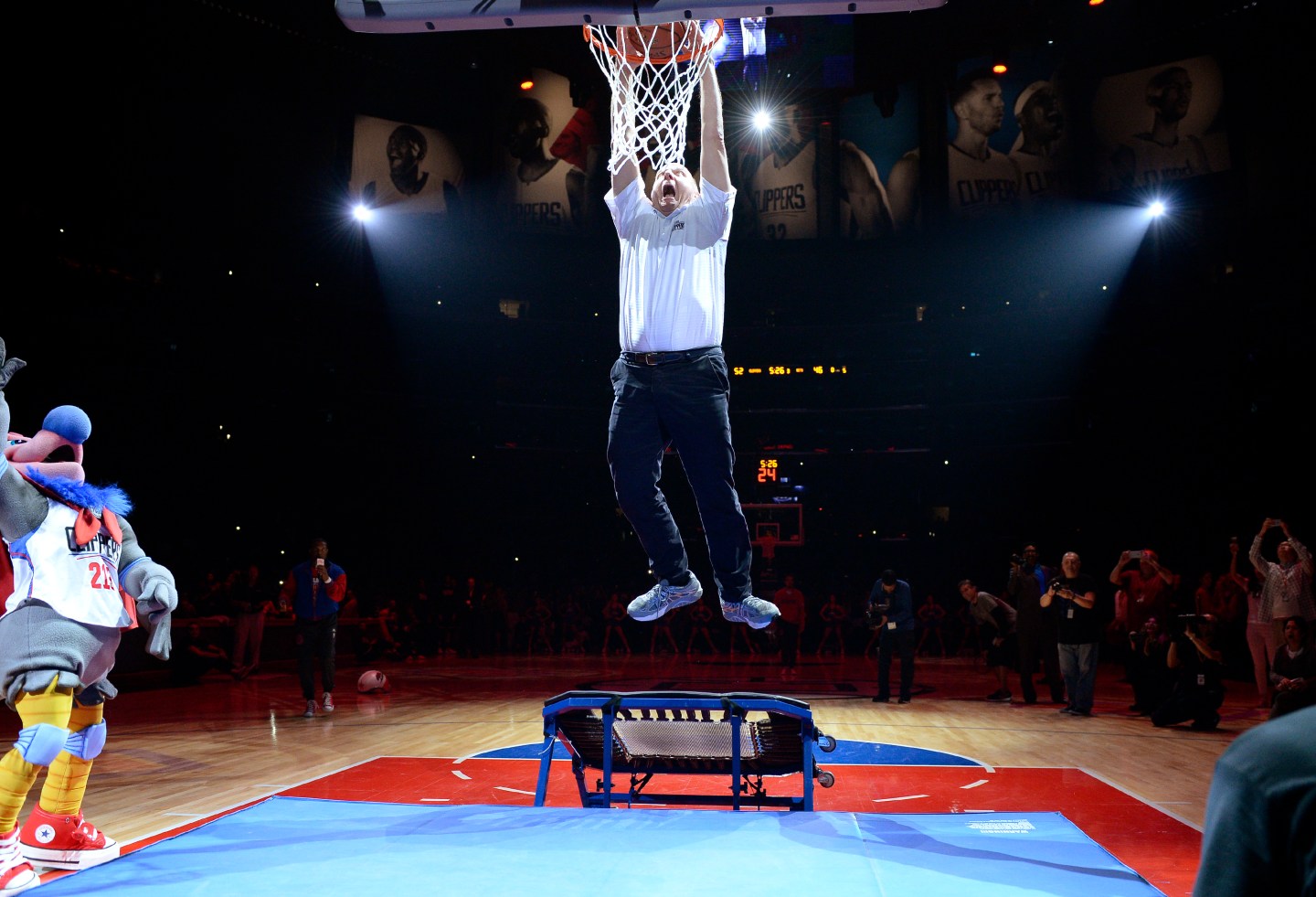 LOS ANGELES, CA - FEBRUARY 29: Steve Ballmer, owner Los Angeles Clippers, dunks a basketball after introducing the team mascot, a California Condor named "Chuck," during the basketball game against the Brooklyn Nets at Staples Center February 29, 2016, in Los Angeles, California. NOTE TO USER: User expressly acknowledges and agrees that, by downloading and or using the photograph, User is consenting to the terms and conditions of the Getty Images License Agreement. (Photo by Kevork Djansezian/Getty Images)
Photograph by Kevork Djansezian — Getty Images

Steve Ballmer has never been your normal chief executive, and that’s why it’s nice to see him up to his old antics.

Ballmer was back at it last night at the Los Angeles Clippers game. To celebrate the unveiling of the Clippers’ new mascot, Ballmer, who owns the team, didn’t simply announce the bird-like figure now known as “Chuck the Condor.”

No, Ballmer did something far more spectacular.

With help from a trampoline, the 59-year-old billionaire and former Microsoft (MSFT) CEO, decided to dunk a basketball. Deadspin earlier reported on the dunk.

Shocked and amused fans took to their smartphones to cover every last second, including Ballmer’s travel (he must’ve forgotten to dribble), the near-miss of the trampoline as he leaped onto it, and his celebratory face when he planted the rock into the hoop.

this Vine of Steve Ballmer dunking (off a trampoline) to get your day started! https://t.co/8FkAtxQPGn

In a world where CEOs often say little and stick to the script, Ballmer has long been a refreshing form of entertainment. Indeed, Ballmer is well-known for his passion and willingness to poke fun at himself.

Ballmer, after all, is the man that spoofed A Night At the Roxbury to promote Windows, who screamed and ran around a stage for far too long during a Microsoft employee event, and couldn’t help but be drenched in sweat while he screamed “developers” over and over and over again.

But there have been sad moments in Ballmer’s long career. Take, for instance, the time he made a tearful farewell to his employees, followed by singing “The Time of My Life” from Dirty Dancing. Surely, there wasn’t a single dry eye in the house.

Despite his antics, Ballmer’s record is one many CEOs have desired. During his time as Microsoft CEO from 2000 to 2014, Ballmer grew the company’s revenue and profits to $78 billion and $22 billion, respectively. In nearly every financial metric, he was an effective leader at the helm of one of the technology industry’s largest companies.

That said, Ballmer retired from Microsoft in 2014 after years of discontent among shareholders. He was criticized for allowing Apple (AAPL) and Google (GOOG) to control the mobile market, and for too slowly moving to the cloud. Under Satya Nadella, the company’s current chief executive, Microsoft has transitioned from a company obsessed with software to one that focuses on mobile and the cloud. The efforts have so far panned out.

Since his departure from Microsoft, Ballmer has largely stayed out of the spotlight. However, he’s still Microsoft’s largest individual shareholder and owns about 4% of Twitter.

But it’s his fun and excitement that was missing for far too long. And with a single dunk, Ballmer is back. It’s nice to see Steve being Steve once again.