Brazilian Oil Giant Petrobras Could Lose Its Most Valuable Assets 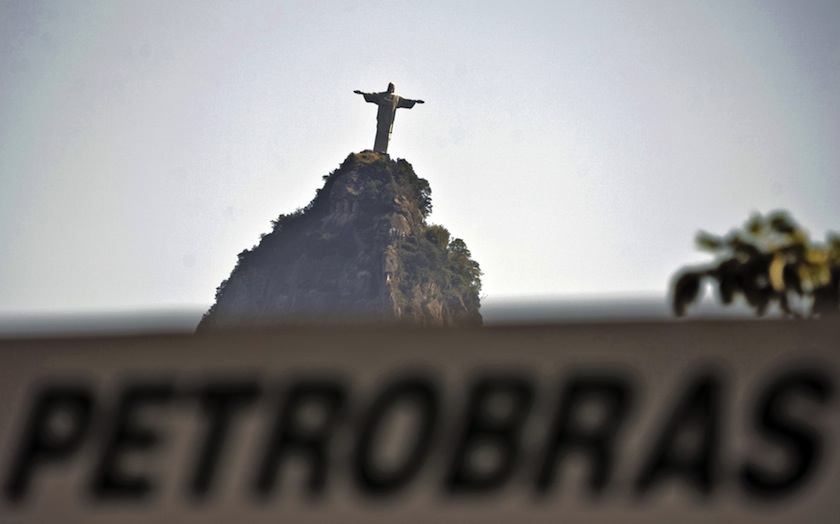 Parcial view of a Petrobras petrol station with Rio's landmark Christ the Redeemer atop Corcovado hill in the background, in Rio de Janeiro, Brazil, on August 19, 2015. Petrobras giant state-owned oil company on Thursday announced that they will offer in the stock market at least the 25 % of their chain of petrol stations as part of a 14 million dollars investment plan up to next year. AFP PHOTO/VANDERLEI ALMEIDA (Photo credit should read VANDERLEI ALMEIDA/AFP/Getty Images)
Photograph by Vanderlei Almeida —AFP/Getty Images

Brazilian state-owned oil company Petrobras (PBR), the most indebted oil company in the world, could soon lose its status as the top operator in some of the country’s most prolific offshore oil assets.

Petrobras is reeling from a wide-reaching corruption scandal and it is drowning in a mountain of debt that exceeds $100 billion. It no longer has the funds to front large-scale drilling in the way that it once did. Petrobras executives are now trying to manage shrinking the company’s footprint.

In order to raise cash it has plans to sell off assets far and wide. But there are questions surrounding the company’s ability to raise the funds that it needs to—since just about every company is unloading oilfields and infrastructure, asset prices may not be as high as sellers want them to be.

Nevertheless, Brazilian news services reported that Petrobras could take in $5 to $6 billion by selling off its natural gas pipeline unit in Brazil’s southeast. Canadian, French, and Chinese companies are submitting bids ahead of a deadline next Tuesday. The sale is part of a plan to raise $14 billion in cash in asset sales this year, funds that will be used to trim the company’s debt.

Also, on February 26, Petrobras said that it had agreed to terms with the China Development Bank to obtain a $10 billion loan. In exchange, Petrobras would send oil to China. The move would give Petrobras the much needed cash flow to get through the year, with billions of dollars of debt falling due.

Still, the financial problems are so vast that Petrobras could soon lose its control over the pre-salt. Known as the “pre-salt” for the vast oilfields that are located beneath a thick layer of salt at extraordinary depths, Brazil’s oilfields are highly sought after.

Brazil’s Senate voted on February 24 to strip the legal requirement for Petrobras to lead on all offshore drilling in the country’s prolific pre-salt. By law, Petrobras has to own at least a 30 percent stake and be the operator on all of these complex projects, a fact that has held back investment.

However, Petrobras is financially unable to drill to the extent that its partners want – it has had to take on high levels of debt to drill in the expensive oil fields. With the burden too great, the Brazilian government is pushing legislation to liberalize the pre-salt. The move could offer large opportunities for companies like Royal Dutch Shell (RDSA), which just completed the takeover of BG Group, a purchase that gives Shell extensive offshore oil assets in Brazil’s pre-salt.

In fact, Shell’s CEO Ben van Buerden said in mid-February that the Brazilian government should loosen the rules so that Petrobras didn’t hold everyone back. “It’s up to congress to decide. But I think it makes sense to call on other companies who have the technology, who have the money,” van Beurden said. “I don’t see how this is not beneficial for Brazil,” he added.

But it is still not a done deal. Petrobras was once a revered entity, and Brazil was proud of the fact that a Brazilian firm, rather than foreign companies, would be the one to develop the pre-salt, and in doing so make Brazil one of the world’s top oil producers. After the enormous discoveries in 2007 and the years after, the Brazilian government passed a law in 2010 to make Petrobras the lead operator on all pre-salt projects. In that way, they argued, the Brazilian public would benefit from the country’s riches. There is still a fear within the ruling party that relinquishing state control over the pre-salt will amount to selling off the crown jewels.

The bill cleared Brazil’s Senate and goes to the lower house. It is not at all clear how the lower house will vote, and it could require months of debate. The WSJ quoted two congressman on opposite sides of the bill. “There is a monumental crisis at Petrobras. Petrobras can’t afford developing the pre-salt on its own,” said congressman Marcus Pestana, a member of the opposition party, who supports the Senate bill to open up the pre-salt. On the other hand, Congressman Paulo Teixeira of the ruling Workers’ Party says that relinquishing oil assets during a downturn makes no sense. “Nobody is going to explore [for oil] at current prices, it would be selling assets too cheap,” he said.

More from Oilprice.com:
The Allure Of Shale Is Wearing Off
Electric Vehicles Could Soon Reduce Oil Demand By 13 Million Barrels Per Day
Oil Giant Cuts Budget By 80 Percent And Suspends Fracking

Even if the bill clears and heads to President Dilma Rousseff, her vote is also unclear. Much of her party opposes liberalization. Adding to the complexity is the fact that there is a campaign to impeach the president for the alleged manipulation of the country’s accounting books.

The future of the pre-salt, at least in the short-term, depends on whether or not Petrobras will remain as the operator. “Petrobras is under major cash restrictions,” Alexandre Calmon, a partner at a Sao Paulo law firm, told Bloomberg in an interview. “Without changes in the regulation, you can’t put any pre-salt area up for a bid.”