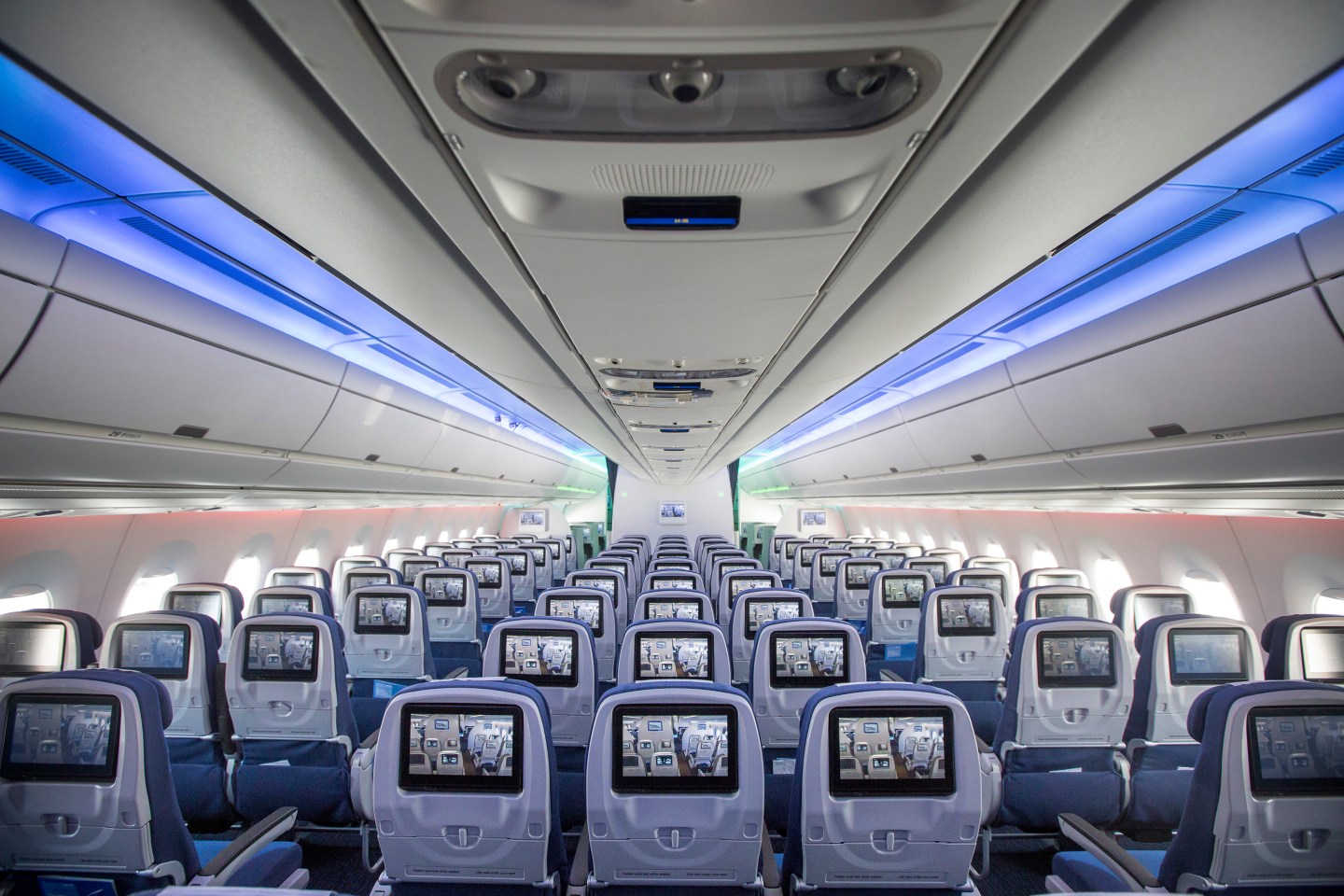 Entertainment screens operate on economy class seats in an Airbus Group SE A350 XWB jet during a media tour at Newark Liberty Airport in Newark, New Jersey, U.S., on Thursday, July 16, 2015. Airbus had 781 confirmed orders for the A350 XWB jet at the end of June, according to Air Transport World. Photographer: Michael Nagle/Bloomberg via Getty Images
Photograph by Michael Nagle—Bloomberg Bloomberg via Getty Images

Airbus Group performed a partial U-turn on plans to cut production of its profitable A330 aircraft on Wednesday, easing the delicate transition to a newer model as it posted 2015 profits in line with expectations on Wednesday.

The European planemaker said it now planned to build seven A330 wide-body jets per month from 2017, partially unwinding recent staggered cuts in output to six from 10 a month as it prepares for its new A350 jetliner.

The move to undo part of the decline of one of its two main sources of cash and profits came weeks after Iran agreed to buy 45 A330 jets as part of a $27 billion deal following the lifting of sanctions.

It contrasted with market disappointment just over a year ago when it announced plans to cut output of the 250-300 seater.

Airbus also confirmed that it had a rare new customer for its struggling A380 superjumbo jet. Japan’s All Nippon Airways has agreed to buy three of the passenger jets, the world’s largest, which sell for almost $500 million each.

Demand for the current generation of jetliners is declining as new models enter the market. But it has gained a temporary respite from the collapse in oil prices, which have made some airlines pause investment in newer, more efficient models.

The upward revision in production of the current A330 model, known as A330ceo, could boost earnings in 2017 and bodes well for output of the current 777 model at rival Boeing (BA), which has also just entered negotiations with Iran, analysts said.

“Given each A330ceo makes roughly €20 million in profit, this would represent about 5% more (in earnings before interest and tax),” RBC Capital Markets analyst Rob Stallard said in a note.

After several years of ballooning orders, many industry analysts have expressed concerns about the aerospace cycle due to a recent dip in overall demand and concerns over the economy.

Airbus reiterated a cautious outlook for 2015, underlining what many analysts see as a tricky, transitional year between old and new models at the two leading planemakers.

Airbus (EADSY) said output plans for the A350 remained challenging, and confirmed delays to its newly revamped A320neo jet, whose deliveries are to be weighted towards the second half of this year following issues with Pratt & Whitney engines.

It also signaled lingering risk with its A400M military transport plane as it negotiates with European nations over recent delays and shortfalls in capability.

Airbus Group said it expected stable underlying operating profit and cash flow this year. For 2015, it posted stronger-than-expected free cash flow of €2.8 billion, boosted by the sale of a stake in Dassault Aviation, and hiked its dividend by 8% to €1.30 per share.