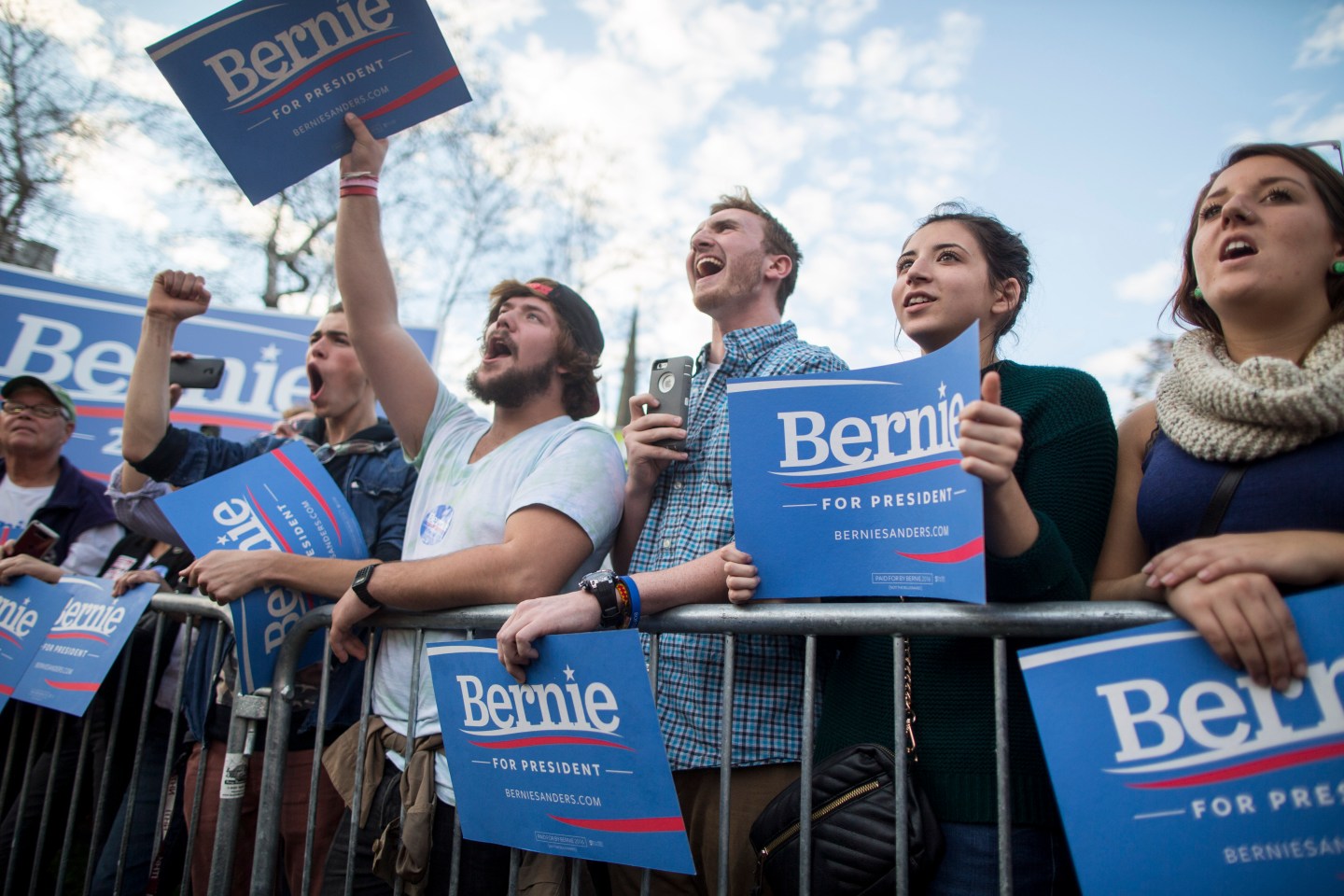 Progressive Kick, a 527 PAC based in Oakland, unveiled a website this week that allows users to track superdelegate commitments and reach out to them. The effort cost around $5,000, the super PAC’s president, Joshua Grossman said.

The group, which has spent several million dollars support progressive candidates in recent years, also worked in conjunction with the groups Ready to Fight and Women for Bernie to launch an online petition that garnered nearly 200,000 signatures.

The new initiative is meant to boost Sanders, Grossman said.

“If I said it was only to make the process more democratic, that would be disingenuous. I’m not going to say that,” Grossman said. “I definitely did this—not just I, but the with the people we’re working with—to help Bernie Sanders.”

In the cash-flushed world of campaign spending and multimillion dollar checks, $5,000 is comparably tiny sum. But Progressive Kick is now the second super PAC to spend money to support Sanders—something the Vermont Senator has repeatedly said he does not want. “We don’t have a super PAC,” Sanders says often.

Grossman said he doesn’t see a contradiction in his support for Sanders. “I don’t think it’s a problem. I think this is very grassroots-y. We made a point of using the money we had left over from last year,” he said. “This is done mostly with volunteer energy.”

He added that the effort was meant to make the Democratic primary process more fair and democratic by making superdelegates accountable. It is one of the few sources that openly lists their names. “We think people who believe in democracy should want this website to be successful, irrespective of who they support,” Grossman said.

Since August, the super PAC arm of National Nurses United, a 185,000-member-strong nurses union, has spent some more than $1.7 million supporting Sanders with funding from its union member dues. NNU, which does not receive large contributions and is spending much of its cash busing nurses to primary states to canvass for Sanders, says it is not like other super PACs.

But according to FEC filings, Progressive Kick’s biggest donor in the second half of 2015 was NNU, which contributed $200,000. The next largest contributor in the last six months of 2015 gave $50,000. Grossman said NNU funding did not help finance its website.

A spokesman for Sanders did not respond to a request for comment.

The new super PAC’s spending reflects how unpredictable spending by outside groups after the Supreme Court’s Citizens United decision dramatically limited campaign finance restrictions. Despite Sanders’ aversion to super PACs, there’s little he could actually do to stop them other than ask since they are by design separate from his campaign.

Progressive Kick’s effort is also different from other super PACs in that it’s not being run by a close confidante of Sanders. Hillary Clinton’s campaign chair has helped raise money for her supporting super PACs, and Jeb Bush frequently attended fundraisers for his super PAC, Right to Rise. Those super PACs are largely run by confidantes familiar with the candidates’ thinking, even if they do not coorinate directly. Sanders, by contrast, has no history with Grossman’s group.

Regardless of whether its lobbying succeeds, the effort could draw attention to the role of superdelegates, who became a point of contention in the hard-fought 2008 primary between Clinton and Barack Obama.

During the Democratic primary, pledged delegates are required to commit to whichever candidate wins the democratic vote in their state. But so-called superdelegates can choose whom to commit to, regardless of popular vote.

What Is a Super Delegate?

This time, that has given Clinton a strong advantage in the primary. Sanders is about even with her in the count of pledged delegates after winning New Hampshire in a landslide and close losses in Nevada and Iowa. But Clinton is far ahead in overall delegates, thanks to around 450 superdelegates who have chosen to support her at the convention, according to the Associated Press. Only 19 support Sanders.

Grossman said is his effort is meant to democratize the Democratic primary process. “We’re creating tools for people to democratize the process and connect with superdelegates themselves,” said Grossman. “Our tale is a tale of the grassroots and with 190,000 signatures in a few days, an amazing one.”

Clinton is supported by a wealthy network of super PACs, and Sanders has repeatedly criticized Clinton, saying she is reliant on Wall Street donations.