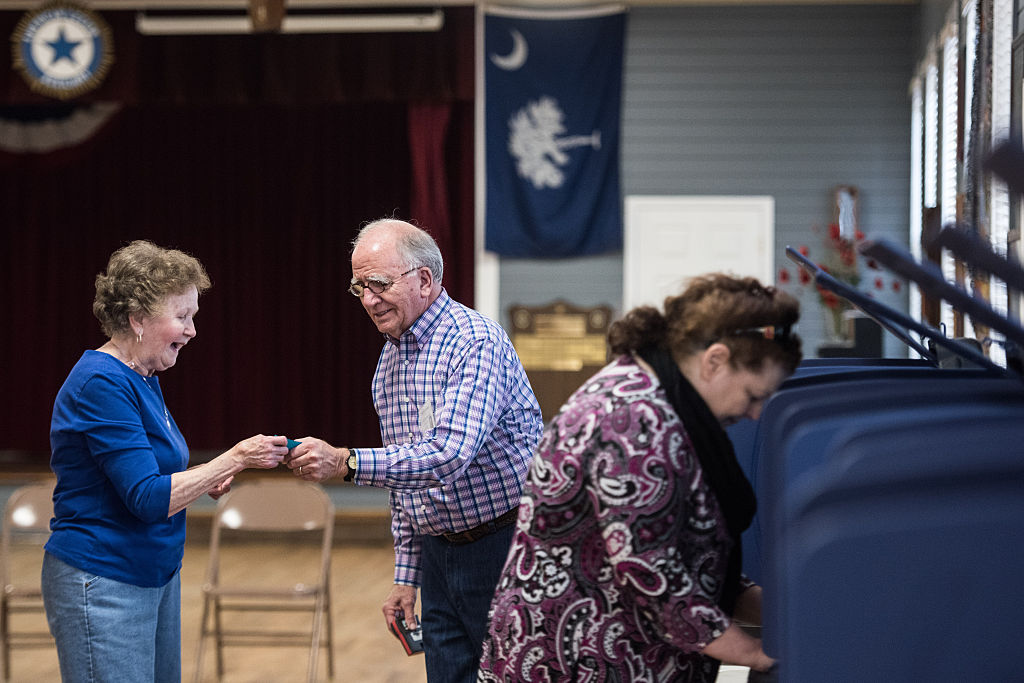 Donald J. Trump, the brash billionaire who has proved the laws of politics do not apply in this tumultuous presidential campaign, won South Carolina’s Republican primary on Saturday, jettisoning decades of Evangelical control over the state.

Trump in recent days found himself in a closer-than-expected race against Sen. Marco Rubio of Florida and Sen. Ted Cruz. Trump saw months of double-digits lead crumble, just as they had in Iowa. Unlike that earlier contest, though, Trump outlasted the collapse.

The fight for second place remained close, with Cruz and Rubio testing their appeal in this deeply conservative state. Each has traded tough words in recent weeks in a state that celebrates rough politics.

Far behind, former Florida Gov. Jeb Bush, Ohio Gov. John Kasich and retired neurosurgeon Ben Carson were competing for a handful of voters. At Bush headquarters in Columbia, the crowd was drinking wine and eating bar snacks while waiting to hear from the candidate. Bush has vowed to go on, but it’s not clear he has a path to winning the nomination.

“Staying in gets tougher,” said one long-time Bush family defender as she sipped her red wine. “But it’s up to Jeb.”

A Rubio ally groused that his favored candidate might have overtaken Trump had Bush not siphoned off his voters. Such calls are likely to grow in coming days, especially if donors cut off Bush and his yet-to-live-up-to-its-hype campaign.

Bush went into primary day struggling, and his aides had to vigorously deny reports that he was out of cash and leaving the race. Such messages were making their ways to voters Saturday via recorded messages. It was a vintage South Carolina dirty trick and left some Bush advisers at his campaign headquarters cursing Cruz under their breath.

Indeed, the dirty tricks of South Carolina left some candidates on the defensive over tactics that would have been seen as disqualifying in Iowa or New Hampshire. Cruz was the biggest offender, but his campaign no apologies for the strategy. It was a reminder that Cruz’s team will do anything to win.

For Trump, the South Carolina vote was an early test if his in-your-face and often profane message could find a home in the Evangelical-heavy South. In a normal year, the thrice-married billionaire would never have been a favorite in a place where many people go to church twice a week.

For Cruz, South Carolina proved a test if voters would punish him for nasty efforts to win an election. It also gave him a chance to test out a message ahead of the so-called SEC Primary on March 1, when many Southern states will cast ballots.

For Rubio, this was the latest place where his campaign was set to confront perhaps unrealistic expectation. He rose to finish third in Iowa, but crashed in New Hampshire. He seemed to have found his footing here, but it’s not clear if it was enough to propel him to the top of the pack.

He seemed, according to even rival campaigns, heading toward a better-than-Bush finish in South Carolina. Bush has limped through South Carolina despite enlisting his brother and mother for support. His mood has been sanguine, and his aides and advisers here are close to their breaking point. Depending on the results Saturday, it might be the last hours of a campaign. Bush has insisted he would go on, but even some of his biggest defenders were noting that the path forward is near impossible.

Kasich bet little on South Carolina and was already looking ahead to the next states. And Carson, who has deep support among Evangelicals dating to his pre-campaign days, was expected to fare fine despite a less-headlines-are-good strategy. Carson will claim a good chunk of Evangelical support—perhaps enough to thwart his sworn enemy, Cruz. The pair met privately this week to discuss Cruz’s campaign spreading false rumors that Carson was ending his campaign in Iowa, but Carson was still not satisfied with Cruz’s contrition.

At headquarters in Columbia, the candidates’ aides were all groaning as they prepared for flights Sunday out to Nevada, which has its caucuses on Tuesday. Collectively, they were all ready to exit South Carolina and leave behind its nasty politics. Many of the candidates were leaving badly bruised, and it’s still not clear that all six of the remaining candidates end the day in the race.