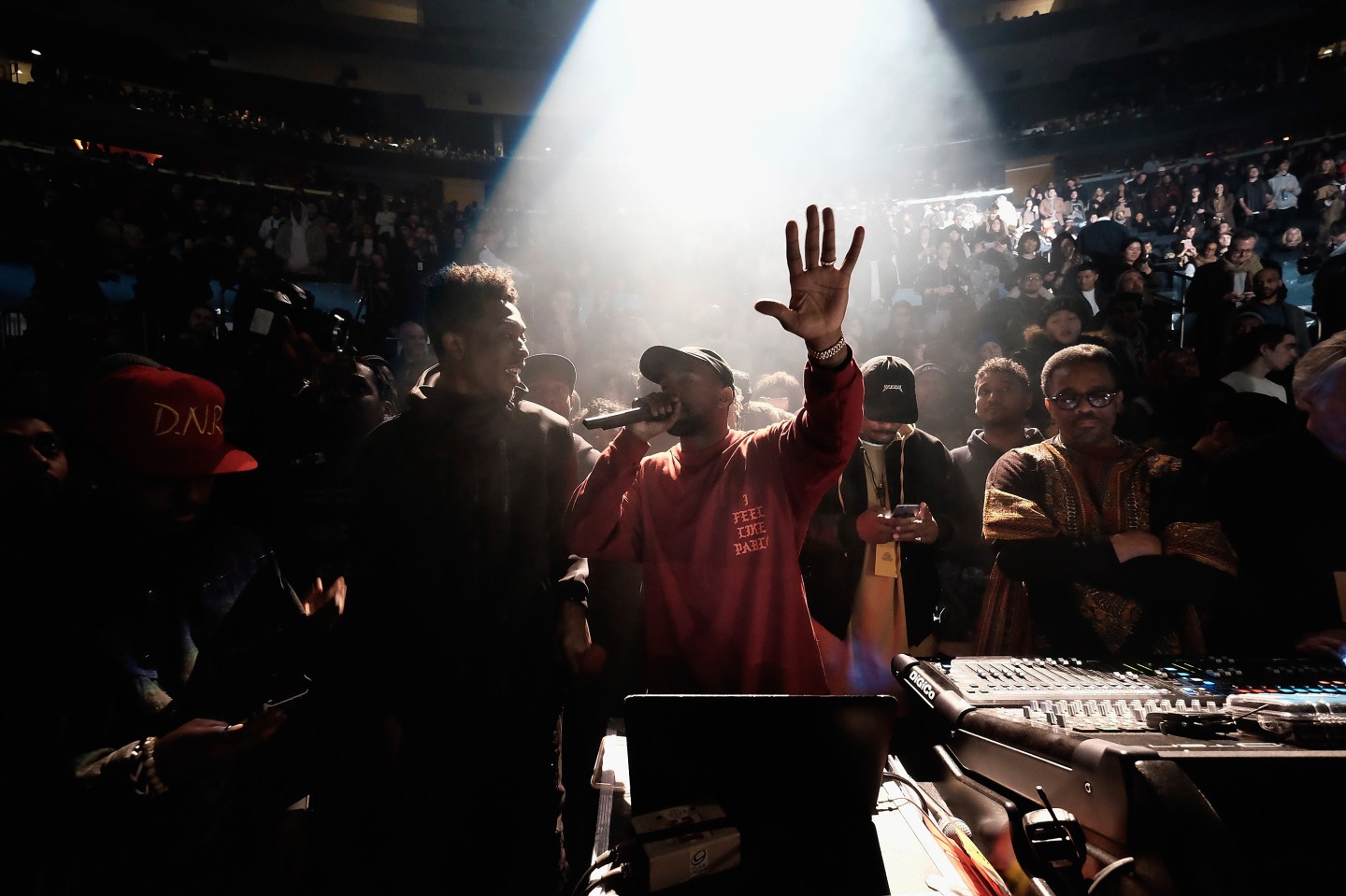 That’s what Kanye West said as part of a closing monologue on Thursday as to how challenging it was to pull off his New York Fashion Week show, “Yeezy Season 3,” along with the premiere of his album, “the Life of Pablo,” and a worldwide streaming event. All at the same time.

Judging from the run-up to West’s one-hour showcase—held at Madison Square Garden, but streamed to a global audience of millions—the multimedia event wasn’t so much a blow out success, but one that taxed West’s reserves on a number of fronts. It also started another feud with pop star Taylor Swift, which we’ll explain in a minute.

In many ways, what West tried to do was unprecedented.

New York Fashion Week shows historically are free, invitation-only events, attended by industry insiders. Recently designers have been streaming their events. But no one has attempted to monetize this, let alone on the scale that West did. Not only did he sell tickets to the live event—for up to approximately 18,000 people (commanding up to $500 per seat) at Madison Square Garden. But tickets were sold to the live-streaming for at least $25 a pop ($35 included download of the album) at 700 theaters worldwide and on Tidal’s streaming music service.

West’s amalgam of music and fashion potentially reached millions of viewers through streaming service Tidal and in theater events. Fortune reached out to Fathom Events and SeeTickets to get final numbers on sales and will update as we hear back.

For weeks, West took to his Twitter feed to document the chaos that came from trying to blend a fashion show and a global listening party. He chronicled the album’s multiple title changes as well as posting frantic requests to find more people to sew leather, last minute stage design changes, seating charts, and the set list. No wonder West requested that no one ask him anything until it was all over.

Please no one text me or ask me for anything till Monday.

The resulting event—which featured models standing stock still on two platforms sporting a pastiche of West-inspired clothing in an earth-toned rainbow of colors– was accompanied by a thumping base beat from the tracks on “The Life of Pablo,” as well as a dose controversy.

West peppered his lyrics with plenty of potshots, and at one point led the audience in an obscene chant directed at rival Nike (tempered by a request not to diss Michael Jordan).

But most notable—and offensive, to some—was a reference to Taylor Swift. When the song “Famous” played, he rapped: “I feel like me and Taylor might still have sex / I made that bitch famous.” He later tweeted that she had approved it.

In a statement to Entertainment Weekly Swift’s rep said, “Kanye did not call for approval, but to ask Taylor to release his single ‘Famous’ on her Twitter account. She declined and cautioned him about releasing a song with such a strong misogynistic message. Taylor was never made aware of the actual lyric, ‘I made that bitch famous.’”

West tweeted again to clarify that “bitch” was meant as a term of endearment.

That may be, but Swift’s brother Austin took to Instagram to post a video that shows him “spring cleaning” a pair of the coveted Adidas/Yeezy sneakers into the trash while whistling.

Was this event successful?

It’s important to note that West thanked Adidas (ADDYY) for footing the bill for the production, so it isn’t coming from his own $100 million pocket. Fashion shows are usually money pits with months of preparation and expense spent on a 15-minute runway show. Before digital streaming, designers such as Diane von Furstenberg, could routinely spend hundreds of thousands to show at NY Fashion Week and not reach more than a roomful of industry insiders.

Tidal viewers, however, complained the streaming wasn’t reliable during the show yesterday. Those who plunked down $35 for tickets to get a solid stream in movieplexes and a digital download of The Life of Pablo’s tracks got the experience—to a point. The streaming cut off in the middle of an encore, at least in one theatre, leaving the audience members sighing audibly and scrambling for their phones to see if they could stream the rest.

The mood at one theater in Greenville, South Carolina was upbeat, despite the abrupt end. Gaggles of teenage boys, some of whom cut classes to attend the show miles away from their home town were talking excitedly about the music. The clothes were less than a side note for them, although one young man said he hoped West would make good on the promise that the price of the Yeezy sneakers (which aren’t available in stores and go for up to $1,250 on auction sites) would go down in the coming months.

Although he’s been revered as a genius in music industry, West also has been roundly criticized by the fashion establishment for his previous collections. Still, Vogue editor-in-chief Anna Wintour attended this event. She was seated next to the Kardashian family (he’s married to Kim Kardashian). West also called out other fashion iconoclasts including former French Vogue editor Carine Roitfeld and Olivier Rousteing, creative director of Balmain and a social media force on his own, for their help achieving his “creative vision.”

Even if West didn’t make much money from attendance at the after the revenue slices taken by Fathom Events, Regal Entertainment Group, SeeTickets and other ticketing vendors, or from sales of the track, he does have a $10 million dollar offer on the table from none other than Martin Shkreli, the embattled pharma executive. Shkreli recently bought the original recording of the most recent Wu-Tang Clan album for $2 million and boasts of buying punk band albums pre-release “saving them” by shelling out $50K.