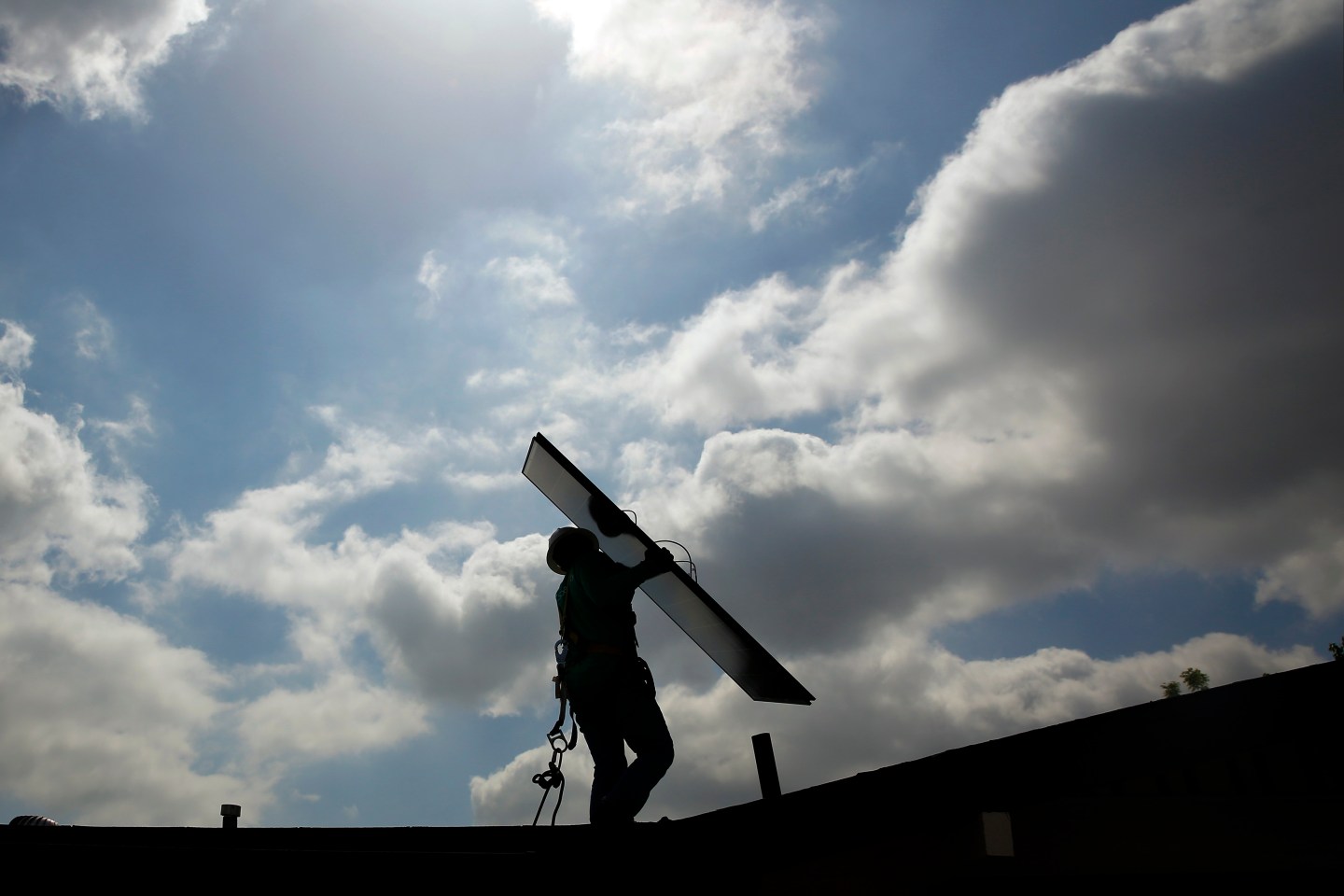 A SolarCity Corp. employee carries a solar panel during an installation at a home in the Eagle Rock neighborhood of Los Angeles, California, U.S., on Wednesday, May 7, 2014. SolarCity Corp., the largest U.S solar-power provider by market value, is expected to announce quarterly earnings figures after the close of U.S. financial markets on May 7. Photographer: Patrick T. Fallon/Bloomberg via Getty Images
Photograph by Patrick T. Fallon — Bloomberg via Getty Images

SolarCity, the largest U.S. solar panel installer, saw its stock plunge over 30% on Tuesday afternoon after the company reported a disappointing number of installations and a weak financial forecast.

SolarCity said it installed 870 megawatts of solar panels last year, or 73% more than in 2014. That is the equivalent of enough electricity to power nearly 150,000 average homes.

However, SolarCity had predicted it would install between 878 megawatts and 898 megawatts last year. It fell just short.

The company also missed on its guidance for solar panel installations in the fourth quarter of 2015. It said it installed 272 megawatts in the quarter—enough electricity to power about 45,000 homes—compared with a forecast of 280 to 300 megawatts.

SolarCity (SCTY) said part of the slower installations in the latest quarter were due to the company abruptly stopping business in Nevada. The decision came after the state regulator there decided to change an important policy that made solar installations attractive to customers by paying them for the energy they produced.

The regulator’s new and highly controversial decision reduces the compensation that the solar customers get and also adds on monthly fees for use and maintenance of the power grid.

The company said its year-long missed guidance was also a result of unforeseen delays in large solar panel projects for commercial companies. In its earnings release, SolarCity said, “We are not happy with these results, and recognize our need to revamp our guidance methodology to avoid any potential shortfalls going forward.”

In addition to the missed guidance, SolarCity projected slower growth in 2016. The company said it will install 180 megawatts of solar panels in the first quarter, or only 18% more than in the same period in 2015. SolarCity said “this represents a higher-than-usual seasonal slowdown that we have historically experienced after strong fourth quarters.” One of the reasons for the slow down was, again, the closure of its Nevada operations.

However, SolarCity’s CEO Lyndon Rive has been clear that 2016 is a year in which the company needs to reduce its losses, and simultaneously slow its growth. In its previous earnings, he said the company planned to cut its growth potentially in half and become cash flow positive by the end of 2016.

In the earnings call on Tuesday, Rive reiterated that plan and said, “the primary focus of our company in 2016 is our goal of generating positive cash by year-end.”

However, SolarCity’s losses grew substantially last year. It lost a whopping $768.82 million in the year, more than twice as much as in 2014. In the fourth quarter SolarCity lost $231.89 million, compared to a loss of $141.44 million for the same period the year before.

But SolarCity’s first quarter outlook surprised analysts. The company said it expected to lose between $2.55 to $2.65 per share, excluding one time items. That would be bigger than its $2.36 loss the year before, despite Rive’s promises that the company is trying to cut its losses in 2016.

Sign up For Data Sheet, the tech industry’s daily newsletter.

Last year, Solar City, which is run by Rive, the cousin of entrepreneur Elon Musk, SolarCity’s chairman, went though a number of highs and lows. While the company continued to ramp up its installations, it faced opposition from utilities and regulators in some states like Nevada that are struggling to figure out how to manage the new influx of solar panels.

At the same time, an important federal tax incentive that was set to expire by the end of 2016, was extended until 2019. It will also be reduced more gradually over time. The extension of the policy, called the investment tax credit or ITC, was a boon across the solar and wind industries.

Despite its attempts to throttle growth, SolarCity said it still plans to install 1.25 gigawatts of solar panels in 2016. That’s enough electricity to power over 200,000 average homes.