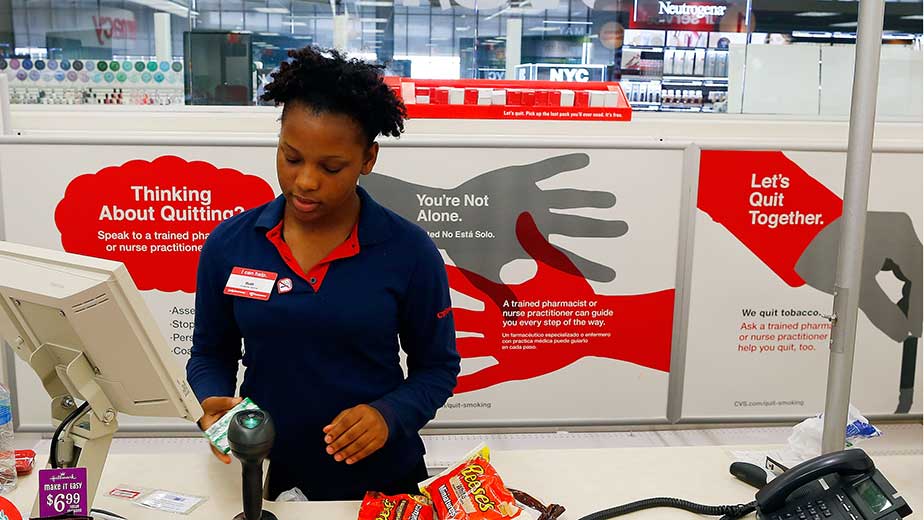 BOSTON - SEPTEMBER 3: Tobacco-free signage and smoking cessation products are seen in the space behind the register as CVS cashier Ruth Jean, 19, of Dorchester rings up a customer at CVS in Boston, Massachusetts September 3, 2014. (Photo by Jessica Rinaldi/The Boston Globe via Getty Images)
Photograph by Jessica Rinaldi — Boston Globe via Getty Images

CVS Health boosted its sales at its retail pharmacies by 12.5% last quarter with about half of that total coming from the long-term care business acquired through its recent Omnicare deal.

CVS Health has been bulking up its drug services offerings. Last year it paid $12.9 billion for nursing-home pharmacy Omnicare, which has helped boost CVS Health’s revenues in both pharmacy services and retail pharmacies during the fourth quarter. It also bought the pharmacy locations inside Target for $1.9 billion and has begun rebranding those locations, starting with stores in North Carolina.

Pharmacy claims were also up, increasing 7.2% to 237.4 million, which was primarily due to net new business through its pharmacy benefits management unit.

Overall earnings for the No. 2 U.S. drugstore fell in line with analyst expectations. Net income rose 13.4% year-over-year to $1.5 billion in the fourth quarter with earnings per share of $1.53, a 26.5% annual increase. The company also reiterated its earnings outlook for the year, though warned that first quarter sales could be slower than analysts estimate due to decreased traffic to its retail stores.

Same-store sales are up 3.5% over the prior year period, but much of that is due to a boost in pharmacy sales. Front-of-store sales, including items like cosmetics, food, and cards, were down 0.5% for the quarter and 5% for the year. CVS Health said front-of-store sales were negatively impacted by softer customer traffic as well as the continued effect of removing tobacco products from its shelves. It estimates that front-store sales would have been about 520 basis points higher if it were to exclude tobacco sales from the comparison.

Shares of CVS Health (CVS) are little changed on the news.