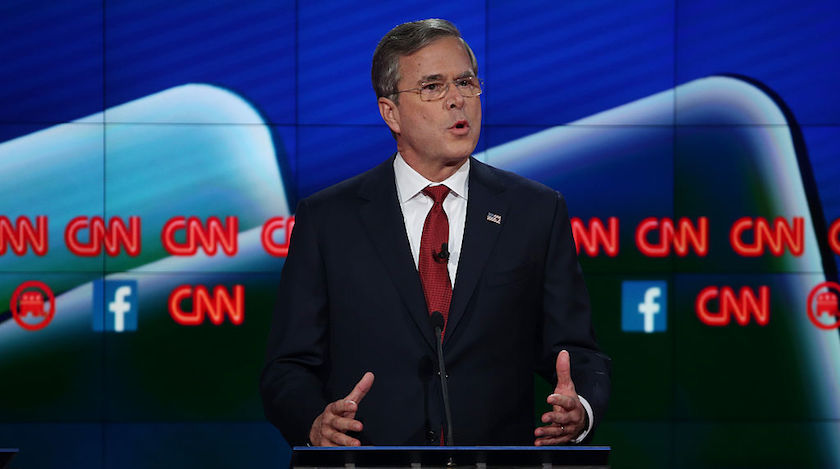 Former Florida Gov. Jeb Bush defended President Obama from criticism from some presidential hopefuls for visiting a Baltimore mosque Wednesday, his first visit to a Muslim place of prayer as president.

Bush broke with Florida Sen. Marco Rubio, who said the visit was divisive, as well as Donald Trump, who in an interview with Fox News questioned the president’s faith, saying, “maybe he feels comfortable there.”

“I don’t think its divisive to go speak in a mosque, I’m surprised it took his eighth year to do it,” Bush told reporters outside the Tilt’n Diner in response to a question about Rubio and Trump’s criticism. “The bigger issue is what have you done to deal with ISIS, it’s important to recognize that peace-loving Muslims that are American citizens are as American as you and I are, but at the same time this president has been derelict in his duties to destroy the caliphate.”

“Going to the mosque is fine but he needed to develop a strategy that goes beyond incrementalism to destroy ISIS and he hasn’t done that yet,” Bush added.

At a campaign event in Dover, N.H., Wednesday, Rubio pointed to the speech as an example of Obama “always pitting people against each other.”

“Look at today – he gave a speech at a mosque,” Rubio said. “Oh, you know, basically implying that America is discriminating against Muslims. Of course there’s going to be discrimination in America of every kind. But the bigger issue is radical Islam. And by the way, radical Islam poses a threat to Muslims themselves.”

“Discrimination in America is bad and the threat of ISIS is real,” he said. “You can believe in both which is why I don’t criticize the president to go to a mosque and to assure that people they shouldn’t be discriminated against. I think that is more than appropriate as the leader of our country.