This Startup Will Help You Find Your Next Intern 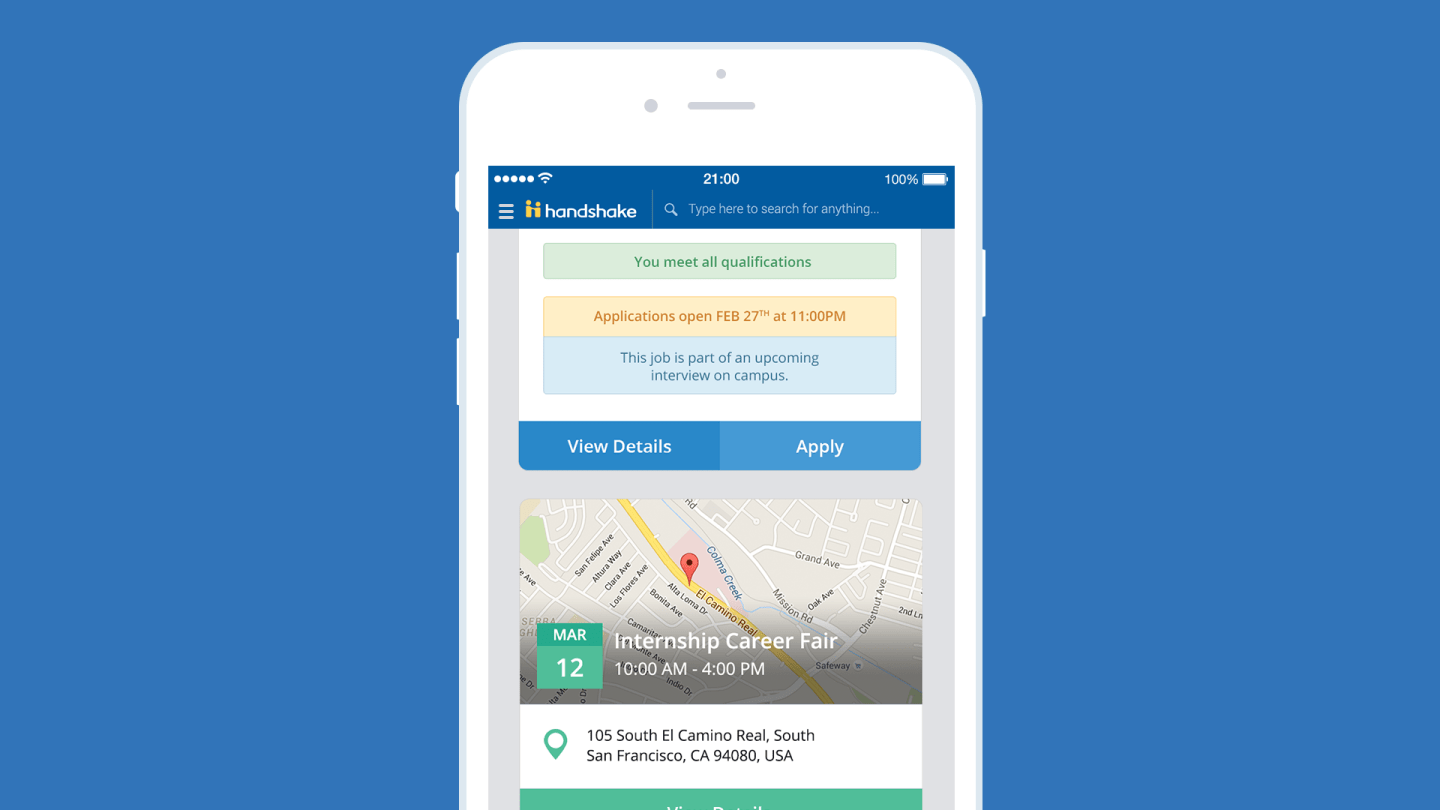 “Do you know any good engineers we can recruit?” That was one of the most common questions Michigan Tech college student Garrett Lord fielded during the summer he interned at hot data company Palantir. And when he returned to school after his internship, fellow engineering students also swarmed him, asking if he could connect them with other Silicon Valley startups. Lord soon realized the college recruiting system was broken when it came to helping companies find college students for internships and entry-level positions.

After spending six months in a full time job at Palantir, Lord decided to start a recruiting company Handshake with two of his classmates from Michigan Tech. Lord calls Handshake the “college career network for the future,” but it’s really a much easier way for college campuses to manage their career services via the mobile web.

“Career service centers have to switch from the Web 1.0 world to mobile and social,” explained Lord.

In the past two years, 60 top universities including Princeton, Johns Hopkins, Stanford, and Cornell, have started using Handshake to exclusively power and manage their career services online. In turn, 80% for the Fortune 100, including Goldman Sachs, Citigroup, Amazon, Google, Microsoft, and JP Morgan, are using Handshake to recruit fresh talent from colleges and universities. Handshake now has more than one million student profiles.

This adoption from both corporations and universities drew the attention of venture capital firm Kleiner Perkins. On Wednesday, Handshake announced that the startup has raised $10.5 million from the firm, with participation from existing investors True Ventures, Lightspeed Venture Partners, and Lowercase Capital. Kleiner Perkins’ Eric Feng, the former chief technology officer at Hulu and Flipboard, will join Handshake’s board of directors.

On the education side, Handshake’s software powers a branded recruiting portal that allows students to upload their coursework, resumes, transcripts, and other documents. Students can search and apply for jobs, message recruiters, and access event listings. As a website, Handshake looks like a version of Facebook made for job searching, with a single feed that shows personalized recommendations of jobs, content, and events for each student. Students can follow certain employers to make sure they receive any updates, events, or other content from them. Students can also access Handshake on their mobile phones and receive alerts when job listings are posted.

Employers, meanwhile, can search for students across all the participating schools that use Handshake, sorting perspective employees by major, classwork, skills, and more. So if a company wanted to hire a developer who knew a certain programming language such as Java, the recruiter could filter all candidates by that skill.

The startup makes money by charging universities an annual licensing fee which Lord declined to disclose. While employers don’t currently pay to use Handshake, the company will eventually charge companies for extra features in addition to the free version.

Although the job listings market is estimated at $25 billion, it’s also extremely competitive and crowded. LinkedIn, Monster, CareerBuilder, and many others have established businesses in job listings already.

But Handshake and Lord’s confidence comes from the success its already had in connecting universities with Fortune 100 companies.