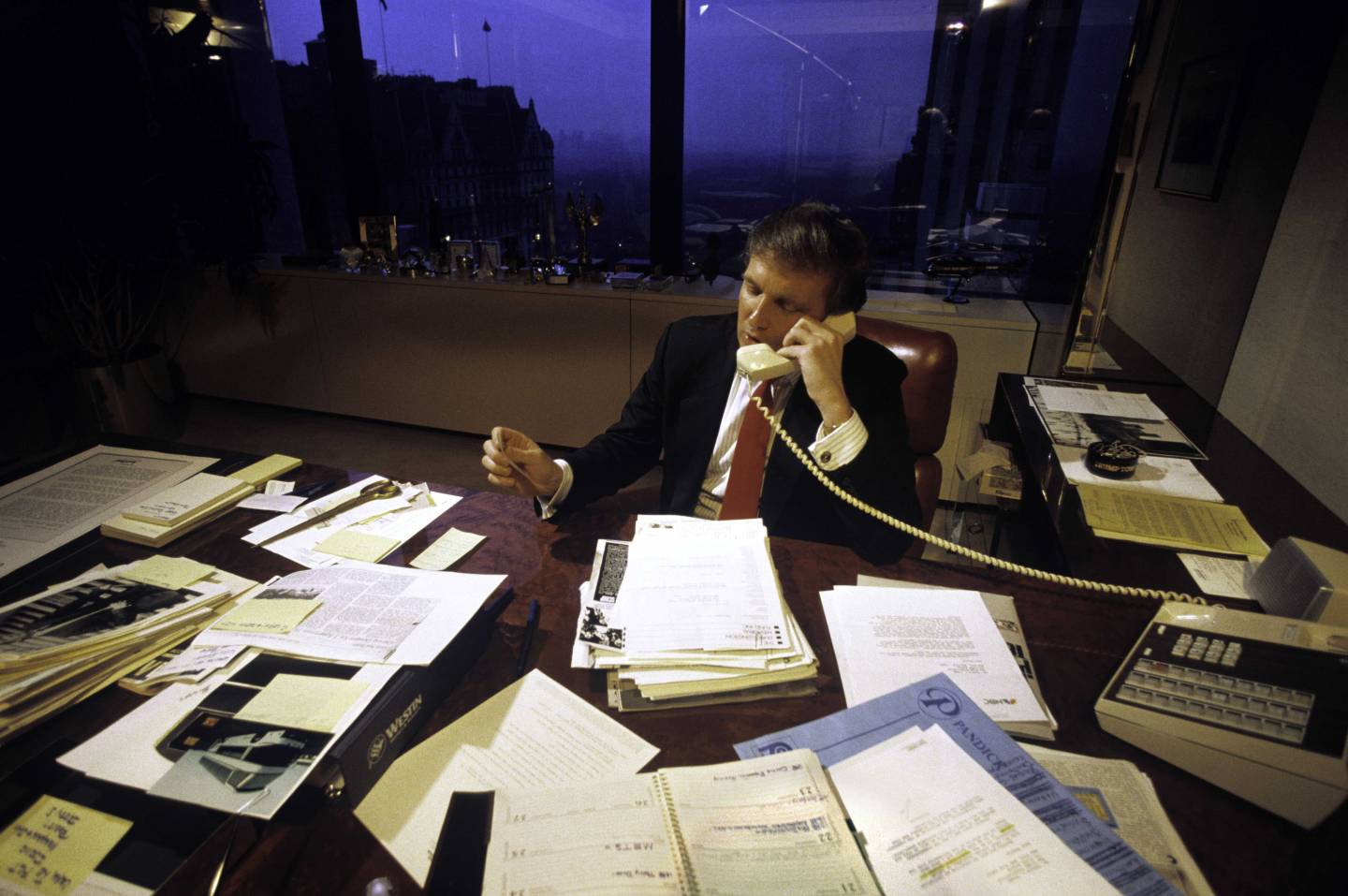 NEW YORK - AUGUST 1987: Donald Trump, real estate mogul, entrepreneur, and billionare spends most of his day attending board meetings in which he manages the construction of his buildings in his offices on August 1987 in New York City. (Photo by Joe McNally/Getty Images)
Photograph by Joe McNally — Getty Images

Martin Balsam: Is she or isn’t she?

George Peppard: Is she or isn’t she what?

George Peppard: I don’t know. I don’t think so.

Martin Balsam: She’s a phony, but she’s a real phony. You know why? Because she honestly believes all the phony junk that she believes.

From Breakfast at Tiffany’s

It’s after the crash, yuppies and greed are supposedly extinct, and just when you thought it was safe to go back in the bookstores the waves suddenly part to reveal the biggest Great White Yuppie of them all. Yes, brash Donald Trump, usurper of Ted Turner’s place as the leading egomaniac in American business, has written a book that explains it all for you (Trump: The Art of the Deal, Random House, $19.95).

Born in 1946, Trump is undoubtedly the finest example we have of materialism, ambition, and self-love among the baby-boomers. His book, written with Tony Schwartz, will no doubt someday be on the required reading lists at great universities for history courses with names like “The Roaring Eighties: The Age of Excess.” It will not be of much use in business schools or to anyone with a real job. What it delivers is everything you always suspected about the makeup of Donald Trump: the pomposity, the shallowness, and above all, the need for more money, more toys, and more attention.

Is he a real phony or just a regular phony? Martin Balsam’s question, originally applied to Holly Golightly, is just as central here. It is also appropriate: Trump, after all, is the man who purchased Tiffany’s air rights to clear the way for a monument to himself, Trump Tower, and thereupon replaced Holly as the most famous social climber ever to hang out at 57th and Fifth. But before examining that question, let us first pose another: Why all the current fascination with Donald Trump?

He is only the 27th-largest developer in the U.S., according to Building Design and Construction magazine, and is not even the biggest in New York. He has built only three buildings in Manhattan; dozens of other developers have exerted more influence on Gotham’s skyline. As a corporate shark, the Great White Yuppie draws yawns on Wall Street. A takeover lawyer told Fortune (September 28): “I haven’t the slightest idea what he’s doing. He’s in and out, in and out. It’s hard to separate the man from the publicity.” He is certainly not the billionaire he claims he is, not by Fortune’s reckoning (or Forbes’s).

The original article spread from January 4, 1988 issue of Fortune. Click to enlarge.

But as any number of jocks will testify, a double in Yankee Stadium beats a homer in Wrigley Field. Donald Trump is a master of hype in the communications capital of the world. When he took over the Wollman Rink renovation project from the City of New York and brought it in on time and under budget—a tale to which he devotes Chapter 12—he got more ink out of a stretch of ice than Sonja Henie and Hans Christian Andersen put together. When he raised the money to save a Georgia widow’s farm, the mortgage burning was staged in the marble lobby of Trump Tower, and the press stampeded. With the face that launched a thousand magazine covers (including those of Fortune, Business Week, GQ, New York, People, Manhattan Inc., and Newsweek), Donald Trump has simply seduced the media.

He could not have brought this off anywhere but in New York. Take as evidence Donald the Master Builder—the real one, Donald Bren of Newport Beach, California. Bren made his mark as developer of Mission Viejo, a planned community south of Los Angeles. A skier and pilot, Bren, 55, is perpetually tanned and blessed with Clint Eastwood good looks. He owns 92% of what is probably the most valuable piece of undeveloped property in the world (Irvine Ranch in Orange County), is worth at least $1.2 billion … and is known to perhaps 1% of the Americans who recognize Donald Trump’s name.

Is Trump a real phony or just a phony? The answer comes on page 40. “I play to people’s fantasies,” says Trump. “People may not always think big themselves, but they can still get very excited by those who do. That’s why a little hyperbole never hurts … I call it truthful hyperbole.” Through the doublespeak, we get our answer: Donald Trump is just a phony.

The CEO of a well-known New York-based company has said that Donald Trump is constitutionally incapable of telling the truth—a stretch no doubt, but it seems that Trump never met a fact he didn’t embellish. During the course of Fortune’s interviews with him for its cover story, he said several times that actor Sylvester Stallone was a buyer in his Trump Parc building. Stallone’s representative denied the story; Trump then denied ever having made the statement. The Wall Street Journal recently listed the acts of truthful hyperbole committed by Trump in connection with his book: He claimed that 200,000 copies had been printed (it was 150,000); that NBC’s Today was devoting five segments to the book (it was two); and that New York magazine’s issue carrying the excerpts was the “biggest seller they ever had” (figures aren’t in). Given this track record as well as most book publishers’ aversion to checking facts, readers might wonder why they should believe anything Donald Trump says in this book.

Trump is thus a rehearsal for that mimeographed Christmas newsletter from your third cousin—all about the spouse’s raise, the new condo, the Bermuda vacation. The book is a 246-page Christmas newsletter about somebody you don’t even know—and from all indications, somebody you don’t want to know. The book is peppered with various forms of the first-person pronoun. The I’s and me’s are not nearly as irritating, however, as the constant repetition of my. It is the perfect yuppie word, of course—a possessive—and Trump is madly in love with it. Thus, we get my pool, my tax abatement, my $250,000 deal, my option agreement, my executives, my half-ownership, my lease, my Tiffany deal, my ground floor, my residential tower, my zoning, my general contractor, my land, my site, my two acres, my Generals, and my apartment. The context of all of these examples would have allowed the use of “the” with no loss of clarity or meaning.

When Trump stops talking about himself and his business acumen, he is not a bad observer of the people around him. His sketches of Barron Hilton, the late Roy Cohn, and particularly Walter Hoving of Tiffany are insightful. Trump’s account of how Hoving’s old-world mores would not allow him to renege on their handshake deal for Tiffany’s air rights, even though Hoving’s associates thought he could renegotiate for a better price, is genuinely absorbing. Unfortunately these kinds of observations consume only a half-dozen paragraphs before Trump returns to his favorite subject.

The book’s first and last chapters are particularly offensive in this vein. In the first Trump unreels a week in his fabulous life of dealmaking (“I call Calvin Klein … A Greek shipping magnate is on the line … I meet with the contractors in charge of building my 2,700-space parking garage”); the last chapter relates how that week’s deals, large and small, panned out.

Chapter Two contains what the Random House press release trumpets as Donald’s 11 guidelines for success. A few of these so-called Trump Cards are merely obvious (Know Your Market); the rest are reminiscent of an old Steve Martin routine about How to Make a Million Bucks and Never Pay Taxes. First, said Martin, get a million bucks. Trump’s guidelines are equally useful.

Two chapters cover the early years. Fred Trump, Donald’s father, made millions building low-and moderate-priced housing in Brooklyn and Queens, but Donald hastens to assure his readers that his was not the usual privileged childhood. “We were brought up to know the value of a dollar and to appreciate the importance of hard work,” says Trump. Even as a child, however, he showed signs of his destiny as a builder and a leader of men. He accompanied his father to construction sites and once added his younger brother’s blocks to his own to erect a gigantic building that he liked so much he glued the pieces together. He was, of course, “always something of a leader in my neighborhood,” and he “tended to be the kid that others followed.”

After graduating from New York Military Academy—spitballs and punching out a music teacher in the second grade helped get him there—he briefly toyed with the idea of studying film, attracted “to the glamour of the movies.” But he decided on Fordham University in the Bronx and ultimately the Wharton School of Finance. At college, says Trump, “while my friends were reading the comics and sports pages of newspapers, I was reading the listings of FHA foreclosures.” A line like that is funny coming from Michael J. Fox on Family Ties; it is somewhat chilling here.

Each remaining chapter is a detailed account, however bereft of new information, of a single Trump deal. Here we learn about Swifton Village in Cincinnati, his first big deal; his option to buy Manhattan’s West Side railyards and the ill-starred attempt to persuade the city to let him build a new convention center there; the renovation of the old Commodore Hotel at the height of New York’s fiscal crisis, a considerable accomplishment that sparked the revival of East 42nd Street, and for which Trump justifiably takes credit; the building of Trump Tower; the forays into Atlantic City; the rise and fall of the USFL and his New Jersey Generals; the Wollman Rink triumph; and the Television City project. After NBC’s decision to stay in Rockefeller Center, the Television City chapter is already dated; Trump is pursuing the project.

This article was originally published in the January 4, 1988 issue of Fortune.