What You Should Know About Ethanol and the Iowa Caucus 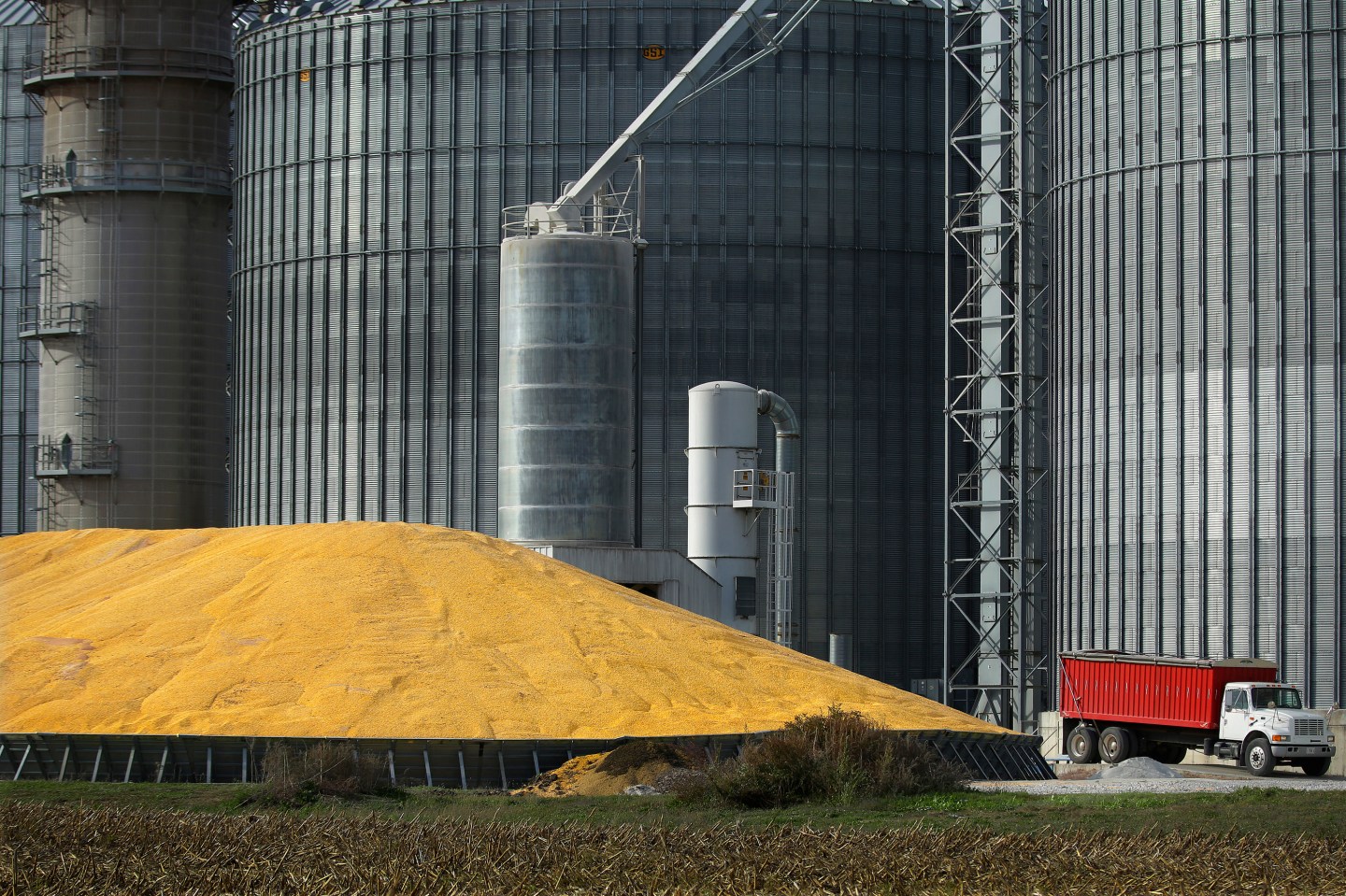 As the silos fill up, harvest corn is piled outside at the Archer Daniels Midland grain elevator Thursday, Oct. 23, 2014, in Niantic, Ill. The U.S. Department of Agriculture says last week's corn harvest jumped 16 percent over the previous work, bringing to 59 percent the amount of the crop that's been brought in from the fields. Above-normal temperatures and below-normal rainfall is credited with allowing the farmers to make up ground on the harvesting that had been slogging along because of nagging precipitation. (AP Photo/Seth Perlman)
Photograph by Seth Perlman — AP

One of the rare times that U.S. ethanol—the biofuel made mostly from corn—takes the national stage is during the Iowa Caucus in a presidential election year. Close to half of the corn grown in Iowa goes to ethanol production, according to the Iowa Corn Growers Association,

Over the past month, many of the presidential candidates, both Republican and Democrat, have toured the state and taken pro-ethanol stances as they look for both voter and industry support.

On Monday, some Iowa voters will be considering the candidates’ positions on ethanol and government mandates to support it as they head to the polls. For Iowans, ethanol means jobs and economic growth, not just a way to replace oil with domestic plant-based fuel.

About a decade ago, the government implemented the Renewable Fuel Standard (RFS), which requires that 95% of U.S. gasoline be blended with 10% ethanol. The standard has been a boon to Iowan corn growers.

The standard also calls for a more advanced form of ethanol, including a kind made from plant waste, to increasingly be blended with gasoline. But such efforts have mostly been failures, and many advanced biofuel plants that were under construction have struggled and shuttered.

But in 2016, the conversation about corn-based ethanol is a little different than it was in previous elections. Spurred by a variety of reports over the years that question the environmental impact of corn ethanol, pundits and regular Americans alike have started to change their minds about both the RFS mandate and support of corn ethanol in general.

Scientists are reviewing whether corn-based ethanol actually lowers green house gas emissions compared to gasoline. Partly because of the use of fertilizer, ethanol production also emits green house gases while gobbling up water and sometimes polluting nearby bodies of water .

Additionally, corn produces far less energy when turned into fuel compared to other plants like sugarcane or even when combusting gasoline. Using land to produce food for ethanol, instead of to feed people, can also cause unintended consequences for global food markets.

At one point Silicon Valley was bullish on biofuels:

But the skepticism isn’t shared by most Iowans. The state generates too many jobs from ethanol and accounts for too much of its economy.

That’s why Republican candidate Ted Cruz’s stance to phase out the RFS has been particularly upsetting to Iowan corn growers. As this excellent PBS piece shows, Cruz has been shadowed around the state by the pro-ethanol group America’s Renewable Future. Cruz is a Senator from Texas, a major oil industry state, and reportedly has ties to the oil industry.

The only other candidate to stand against the RFS during this election cycle is distant Republican runner Rand Paul. All of the Democrats support corn ethanol and the RFS.

If Cruz wins in the Iowa Caucus, pro-ethanol groups are worried that it could set a precedent that candidates can refuse to worship at the corn ethanol altar and still do well. Trump, the leading Republican candidate, has said he supports the ethanol mandates.

However, the emergence of doubts about the sustainability of corn ethanol, have made some strange bed fellows. The liberal magazine Mother Jones, which likely stands in opposition to Cruz on almost every issue, recently wrote an article about the RFS entitled: “Here’s One Issue Ted Cruz Actually Gets Right.” The piece says, “Cruz’s opposition to ethanol mandates puts him in a place you would never expect to find him: on the right side of a debate about climate change.”

Even if Cruz doesn’t win in Iowa, the corn ethanol lobby appears to be losing its grip on the Iowa Caucus. The massive drop in oil prices over the past year makes all forms of biofuels less competitive compared to gasoline.