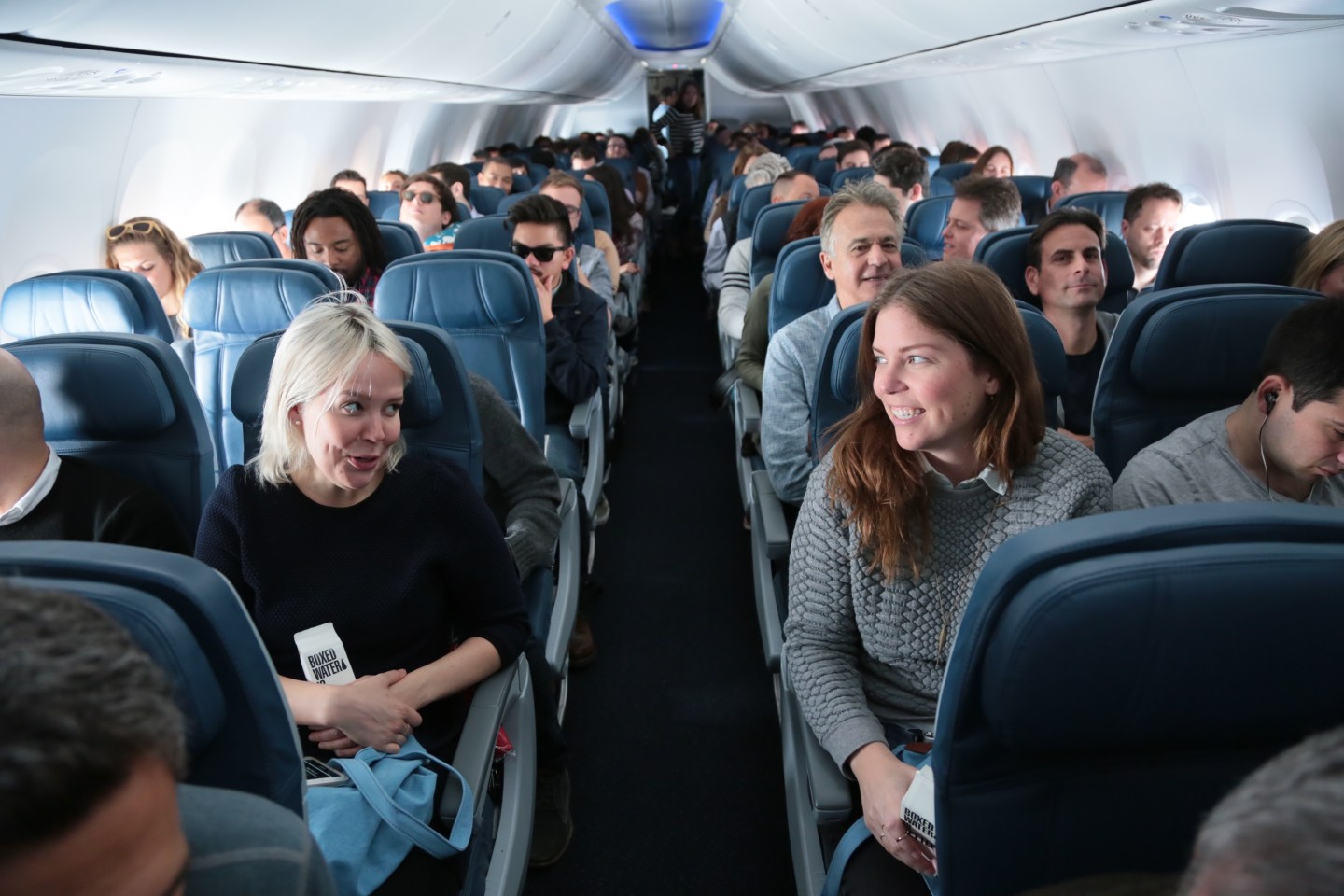 The flight attendant took a deep breath and began speaking into the airplane’s public address system.

“This is the first time I’m doing this. I’m hoping one of you likes my voice so you will hire me in some fashion.”

The passengers didn’t flinch. On any other day, a flight attendant’s admission of performing a duty for the first time would be justification enough to down the rest of a watery bloody mary and cower under a staticky polyester blanket. But this was the official Delta Festival Shuttle to the Sundance Film Festival, which runs through Feb. 1. The mood in the cabin was more high-class than high alert—more Pan Am than, say, Airplane!

For this year’s festival, Delta (DAL) partnered with United Talent Agency, the talent and literary powerhouse with offices in New York and Beverly Hills, to fill the Boeing 737 with actors, filmmakers, and agents who had business at Sundance. A few flew for free. Most paid a one-way fare of $190. Perks for passengers were many: a complimentary pre-flight brunch, gift bags full of Sundance essentials (water, hand lotion, phone charger), and an opportunity to network with 179 other industry insiders. Plus prizes, of course.

A team of Delta staffers joined the flight attendant at the front of the plane to raffle off first class round trips to places like Sydney and Shanghai. There was some confusion about whether the lucky winner of two tickets to Mexico was on the plane. “I can take them if he’s not here,” shouted the actor Craig Robinson, seated three rows back.

There were no losers on this flight. All food and alcohol was free, though many passengers abstained from drinking on account of the early hour (11 a.m.) and, perhaps, the departing city (Los Angeles, where green juice generally trumps champagne).

With such amenities, the Sundance shuttle was unlike Delta’s others to the South by Southwest Interactive festival or the Summit at Sea conference. The airline first partnered with UTA and other companies last year to fly leaders from various industries to key gatherings. Private airline services like Surf Air, Wheels Up, and Blade have been facilitating in-flight networking for a few years. But Delta is the first major carrier to get in on the game.

“The techie crowd is a little more adventurous than the entertainment team,” said Ranjan Goswami, Delta’s vice president of West Coast sales. “But they’re all excited to start networking, frankly, before too much alcohol is consumed. I think a lot of business might be getting done on this flight.”

He added: “It’s like throwing food in the water. All these fish come. Every year we have a waitlist.”

For Sundance, UTA says it approached the plane’s seating chart like a wedding. “We try and be really mindful of making sure that filmmakers, actors, and producers who are working on the same movies are with each other,” said Julian Jacobs, an agent. “We try and be mindful of talent as well. It’s a sensitive thing.” Still, Robinson and another familiar face on the flight, the comedian Paul Scheer, gamely posed for selfies with passengers who were unafraid of looking like fans.

Miramax executive Zanne Devine sat in the second row of first class. She was on the festival shuttle to Sundance last year and jumped at the chance to get on again. “Last year I sat next to Emily Rose, the manager,” Devine said. “We haven’t worked together yet, but we will.”

The problem with any party plane is that the ride eventually comes to an end. As the peaks of Utah came into view, passengers chatting in the aisles shuffled back to their seats . Once the plane touched the tarmac in Salt Lake City, the VIP treatment was over.

Well, for most of the passengers, anyway. Those that didn’t prepare for the hour-long drive from Salt Lake City to Park City, where the festival is held, could opt to use Blade, the New York-based private jet and helicopter service with an Uber-like mobile application. The helicopter ride wasn’t any shorter, thanks to the necessary drive from the international airport to the private aviation terminal and the brief wait for a helicopter to arrive. (Blade’s most trafficked routes, like Manhattan to the Hamptons during summer, beat driving time by miles.) But the 10-minute, epically scenic ride through the canyons can’t be beat.

Networking up here admittedly would have been difficult. Who wants to talk shop into a microphone that all the other passengers in the helicopter can hear? For this leg of the trip, Mikey Glazer, an entertainment lawyer who flew on the Delta Festival Shuttle, decided instead to sit back and enjoy the view.

“I feel like I’m on The Bachelor,” he said, grinning.