Blading to the Hamptons with the ‘Uber for Helicopters’ 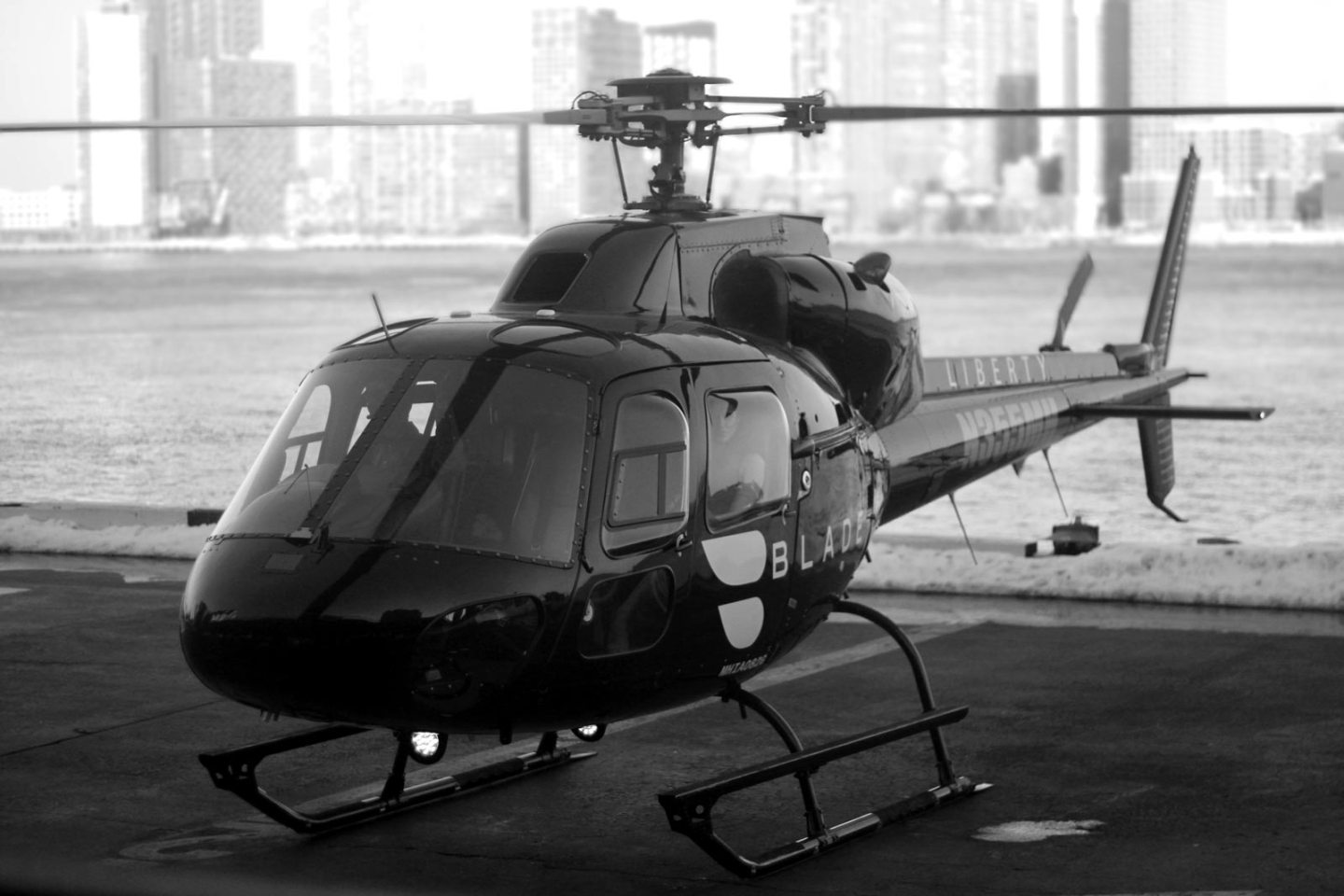 Rob Wiesenthal, CEO and founder of Blade, the Uber for helicopters, would like you to know that Blade is not a luxury product. He insists upon it. Summoning a helicopter to fly you to the Hamptons by tapping your iPhone is for the masses. Words like “VIP” and “jetsetting” are banned at the company, he says.

He offered proof of this assertion at Blade’s lounge on 34th Street in Manhattan, one of three on the island. Located beneath FDR Drive and next to a parking lot, the Blade lounge comprises one half of a trailer, which it shares with another private helicopter company.

Even though Blade’s helicopters have the two-year-old startup’s logo emblazoned on their bodies, they aren’t luxurious, Wiesenthal argues. “There are six people in there. People are like this [he makes a cramped motion]. It is not a luxurious experience. You’re sitting in a trailer right now,” he says.

Blade isn’t about luxury. It’s about utilizing excess capacity. That is the the company’s DNA and also its most misunderstood part. Wiesenthal repeats this point numerous times during my tour of two of the company’s lounges.

He got the idea for Blade when he took a private helicopter ride to the Hamptons with one other person in it. There was another helicopter taking the exact same route at the exact same time with just one person in it. Those private chartered helicopter rides cost as much as $6,000. Why weren’t they riding together and splitting the cost? Strangers sit next to one another on airplanes all the time. Why not do the same thing for helicopters? “Before now, no one has been able to take a helicopter and chop it up until six pieces,” Wiesenthal says.

By that rationale, Blade is not the “Uber for helicopters.” Rather, “we’re more Uber Pool than Uber,” says Wiesenthal, referring to Uber’s carpooling feature.

Selling Blade, which starts at $550 for a ride to the Hamptons, as a money-saving service for the masses feels a bit disingenuous in Blade’s lounge. There, “customer experience associates” dressed in white one-piece jumpers designed by Tamara Mellon serve cocktails in sippy cups shaped like wine glasses. Blade riders get color-coated wrist bands and luggage tags for their flight so that no one has to call out names when boarding. They get to hang out on overstuffed black leather sofas beneath a giant poster of Frank Sinatra exiting a helicopter, drink in hand. (The Blade logo has been photoshopped onto his chopper.)

The branding part is part of Blade’s value proposition to helicopter operators. The company doesn’t own or fly the planes, it merely gins up demand and provides the customer service (and sippy cups) for helicopter companies that might prefer not to deal with such things. “If you charter a plane and go next door, it looks like a dentist’s office,” Wiesenthal says.

The branding and the jumpsuits and the rosé is all meant to make customers comfortable with the experience. Three quarters of Blade’s customers haven’t taken a helicopter before.

Where the average chartered helicopter customer is an older male, Blade’s customers are an average of 31 years old and almost half of them are female. Wiesenthal says this generation is making different financial choices than his generation. “Maybe they don’t go on a vacation or don’t spend a lot of money at a nightclub and want to Blade home from the Hamptons. They’re tuning differently than my generational on how they spend money,” he says.

It helps that they like to use Instagram. “This company wouldn’t be as big as it is today if Instagram didn’t exist,” Wiesenthal says. The bathroom in the lounge is decorated with framed Instagram photos from customers.

Blade is profitable on just $6 million in venture funding from the likes of Eric Schmidt and Bob Pittman, both of which are pilots themselves. Almost 40,000 people have downloaded the app and entered in credit card information, but Wiesenthal won’t say how many trips Blade sells.

Like Uber, Blade has become the face of a fight over transportation in the Hamptons and elsewhere. As Fortune’s Jeff John Roberts reported earlier this summer, coalitions like Stop the Chop have been making noise about noise—they say the increase in chopper traffic overhead is disrupting their quality of life.

Wiesenthal says only site-seeing helicopters fly over residential areas like Brooklyn Heights and Battery Park, where Stop the Chop is focused. Blade flies over the water on trips to the Hamptons and Nantucket. In the Hamptons, where there has also pushback about an influx of helicopters, Wiesenthal notes that the East Hampton airport has been there for nearly 100 years, predating most of the nearby homeowners, and that Blade works with communities to be “a good neighbor.”

As the summer season ends, the company is thinking about ways to expand beyond trips to the Hamptons and Nantucket, including Blade Bounce, a service that takes customers to the airport. If you’re flying on a private jet, which many Blade customers do, it will drop you off next to the jet. (Regarding the noise, Wiesenthal says neighbors there should be used to air traffic.)

The aesthetic of the Blade lounge, from the jumpsuits and Sinatra to the copies of 1970s magazines, is meant to evoke a time before long security lines and crappy airport food—a grand, golden age of aviation. Just don’t call it luxury.