Why Office Banter Is Anything But a Waste of Time 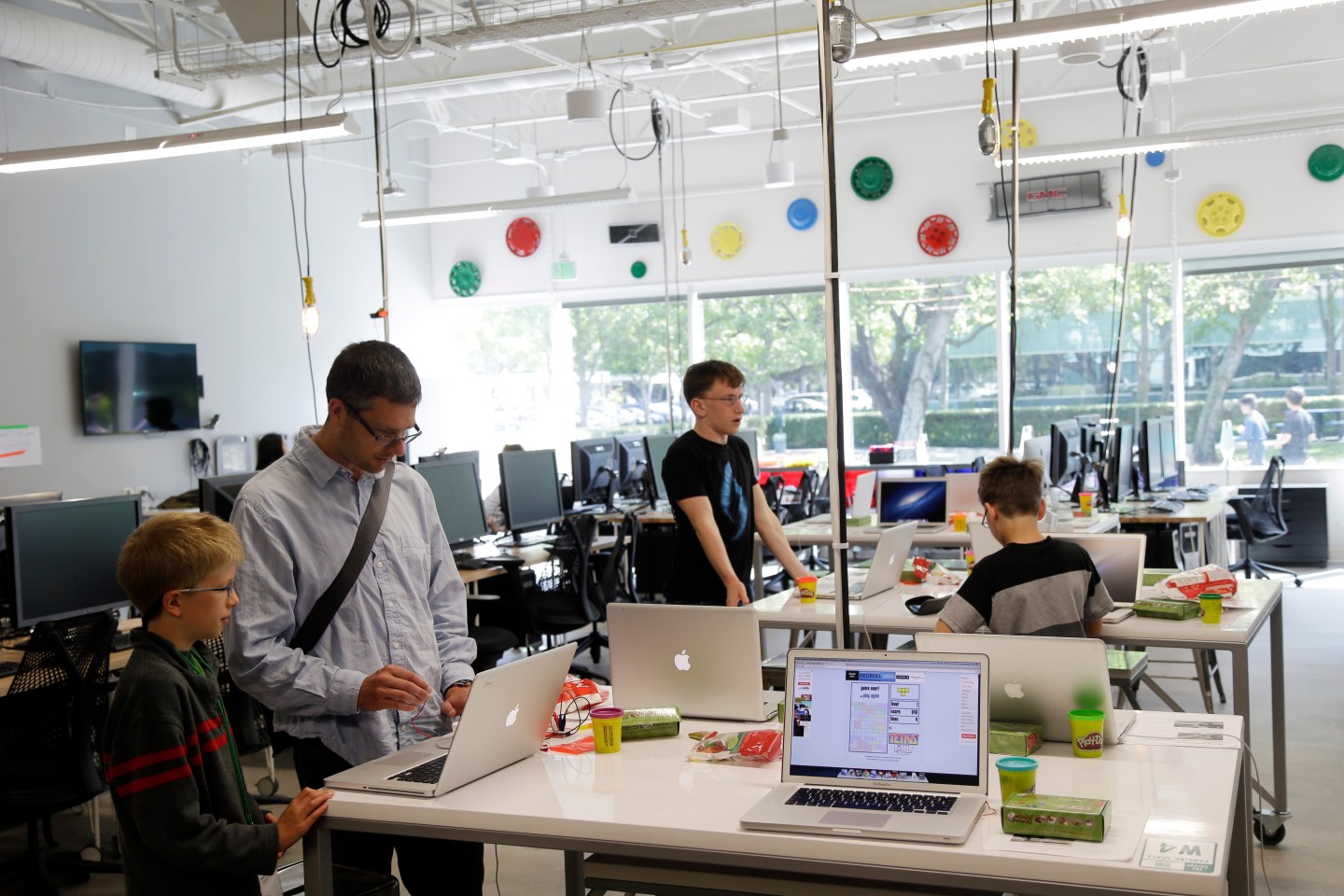 Employees and their children work together on projects in The Garage at Google headquarters in Mountain View, Calif., Thursday, April 25, 2013. (AP Photo/Marcio Jose Sanchez)
Photograph by Marcio Jose Sanchez — AP

Dear Annie: We are a team of 24 developers, and we just got moved into a new office space that happens to include a separate kitchen area with a water cooler, small refrigerator, coffee pot, sink, etc. It’s shared by a couple of other departments who use our software but whom we wouldn’t ordinarily have any direct contact with, which is interesting.

Most of us spend 20 or 30 minutes in there, once or twice a day at most, just chilling and talking, sometimes about work and sometimes about other stuff, and we chipped in with some people from down the hall to put in an espresso machine. The only problem is our boss, who disapproves. He keeps giving this scary Death Stare to anyone who heads over that way, and yesterday he said to one of my coworkers, ”We’re not some kind of hipster startup,” whatever that’s supposed to mean. Can you suggest some way to convince him that taking a break isn’t necessarily just wasting time? — App Wizard

Dear Wizard: Even though there’s nothing new or trendy about coworkers hanging out together in an office break room, your boss evidently sees this as a perk, like desk-side massages and free food, that scrappy new enterprises famously use to appeal to young hires. But I wonder if he’d consider Citigroup (C), the nation’s third largest bank, “some kind of hipster startup.”

The company’s new 39-story Manhattan headquarters are entirely open-plan — not even CEO Michael Corbat has an office door — for the express purpose of making sure employees have plenty of opportunities for casual contact with each other, and especially with colleagues from different departments. Noting that not everybody was ready to start mingling, Corbat insisted, “You’re going to be forced to bump into people.”

That is because bumping into people is increasingly considered an essential part of corporate culture, that hard-to-define thing that often determines whether or not top talent sticks around, and a big chunk of it is “born from bonds between people because of shared interests that aren’t connected to work,” observes Tim Eisenhauer, president of intranet software maker Axero Solutions. “It’s unrealistic to expect a strong sense of camaraderie and common values without that.

“Google, Zappos, LinkedIn, Facebook, and many other top companies believe that letting people spend some time ‘goofing off’ together amounts to a strategic advantage in the marketplace,” he adds. “Intuitively, it makes sense. When do your best ideas come to you? When you’re staring at your computer screen — or when you’re taking a shower, out for a run, or relaxing with a cup of coffee?”

Eisenhauer feels so strongly about this that he set up an intranet site at Axero called The Water Cooler, where employees, most of whom work far away from the company’s San Diego headquarters, can share music, videos, and anything else they might have on their minds. “It gives people a chance to know each other better,” he says. “So there’s more of a feeling of connection.”

He sees at least three reasons why casual chitchat is anything but a waste of time:

It helps bring some people out of their shells. Social anxiety is more common in the workplace than many people realize, Eisenhauer says, and “it can lead to communications breakdowns” that cause errors and inefficiency. Water cooler chat alone won’t solve the problem, but friendly, pressure-free interaction with coworkers “can be a major step in the right direction.”

It helps collaboration. “Some people find it easy to collaborate with people they don’t know, but others need a degree of shared personal interests for collaboration to be at its best,” Eisenhauer says. “Instead of holding structured ‘meet and greet’ events, managers should encourage people to get to know each other during their down time.”

It boosts productivity. “The greatest impact of water cooler chat is on the myriad small challenges we face every day,” he says. Venting about a bug in a program, for instance, might lead to someone pointing out a way to work around it. “From a software developer’s perspective, ‘idle’ conversation sometimes turns into a quick lesson about a programming technique that might not be well documented or published,” notes Eisenhauer.

If you can find a way to mention something like that to your boss, it might help him see that, even when you’re hanging out in the kitchen, you’re still working at least some of the time. “The point is, people who know and like each other will have each other’s backs and help each other out,” Eisenhauer says. “It will show in their work.”

A fourth reason your boss might want to lighten up: Ultimately, it’s in his own best interest. “A great way to get employees engaged is to show that you trust them,” Eisenhauer says, adding that the highly skilled job candidates in biggest demand these days “are looking for a work environment that doesn’t stress them out. So as a leader, being willing to provide that will get you a lot of extra points.”

Talkback: Do you agree that personal connections with coworkers make people more productive? Leave a comment below.