Europe to U.S. on Iran: You Snooze, You Lose 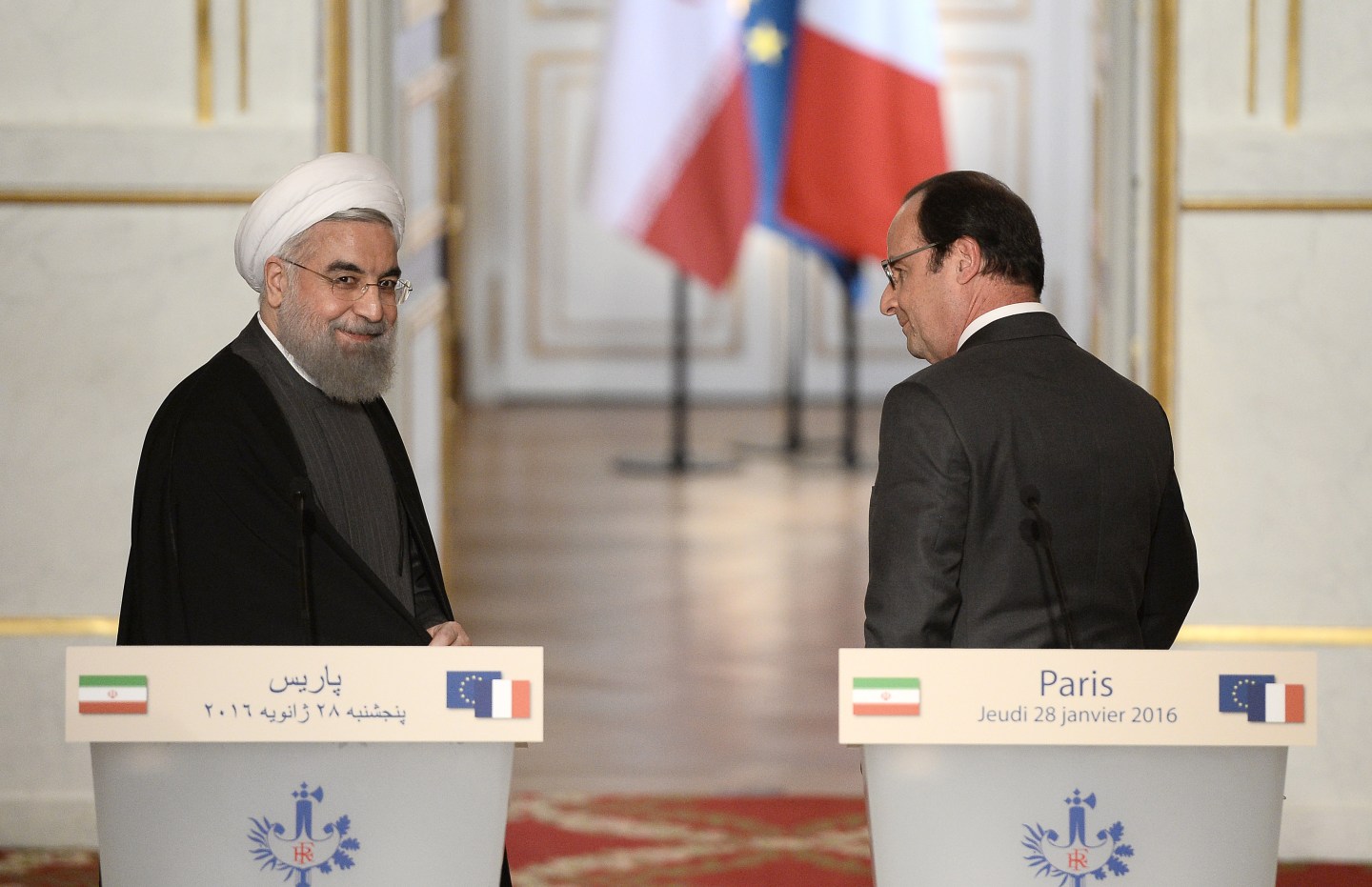 Iran’s President Hassan Rouhani whizzed around Rome and Paris this week with dozens of Iranian CEOs in tow, signing deals worth billions of dollars to export oil, overhaul his country’s airline fleet, manufacture cars, and more. On Thursday, Rouhani received a red-carpet greeting from President François Hollande and a trumpet blast of welcome at France’s Foreign Ministry before numerous signing ceremonies inking business contracts that will last for years.

The absence of U.S. businesses in this week’s business frenzy has been striking. The lightning round of deal-making comes just 10 days after the U.N. nuclear sanctions was lifted—the result of years of negotiations, ironically much of it led by U.S. President Barack Obama and Secretary of State John Kerry.

With U.S. sanctions relating to human rights violations and support of terrorism still in place, and Congress vowing to block any moves to lift them, America has put itself in a vacuum when it comes to dealing with Iran – and the Europeans are racing to fill it.

For European executives, it’s a rare moment to make rapid progress in a big market that still has clear potential to grow. With nearly 80 million people, many of them well educated, literate, and tech savvy, the business prospects seem huge. “For French businesses it is very important to start in Iran again,” says Philippe Gauthier, vice president of France’s business organization Medef, which hosted a daylong round of deal-making between Iranian and French executives. “It has been 10 years, and Iran is a very big country—by far the biggest in the Middle East.”

For Iranian businesses, the feeling is that the country cannot afford to wait for U.S. laws to change—something for which they believe American companies will pay the price. “The U.S. is losing a big market,” says Saeed Maghsoudi, managing director of the Tehran petrochemical company Namvaran P&T. Having traveled to Europe with Rouhani, he says he has renewed contact with companies he lost touch with through a decade of E.U. and U.S. sanction regimes, which steadily drove more and more Western businesses out of Iran, leaving the country increasingly isolated economically.

“If the U.S. wants to come back, we would be happy. But now they are losing,” Maghsoudi says. “We are a really big country that is safe, with no terrorism. The U.S. could use Iran as a place to do business in the whole region.”

Many executives who do business in Iran say they believe the more natural partner for Iranian businesses is the U.S., rather than Europe—and that many would probably prefer American partnerships, if given the choice.

“You walk down the streets of Tehran and what do you see? Burger places, imitation Nike (NKE) sneakers,” says Ardavan Amir-Aslani, a Iranian-French lawyer in Paris, who consults French companies signing business contracts Iran. “Millions of Iranians go back and forth to the U.S., it’s the place Iranians most identify with. There is a craving for American consumer goods, anything American. They all dream of America.”

For now, that is likely to remain a dream—a fact that at least this week, has served European businesses extremely well.

European companies might not always have such a clear ride—as they themselves have learned, during the sanctions, when they lost business to non-Westerners. China has become a key trading partner with Iran during years of Western sanctions, importing large quantities of gas and oil, and setting up factories in the country. “China has been very active. And now it’s a strong competitor,” Gauthier, of the French business organization Medef, says.

Yet just as Europe might begin steadily displacing China’s role there, so might U.S. companies one day. “You will see U.S. companies go in and prosper,” says Amir Handjani, an Iranian-American, who is president of New York-based PG International Commodity Trading Services, an importer of corn, wheat and other commodities into Iran—including from U.S. companies, who, like Boeing, obtain dispensation from the Treasury Department.

U.S. companies “tend to beat out their European competitors by their sheer efficiency and competitive energies,” Handjani says. “That has always been the case.”

Yet returning to Iran might be just the first hurdle for businesses, whether European or American.

For one thing, the nuclear deal includes provisions for a whole new round of sanctions, if Iran ever cranks up its nuclear program. And there are ongoing tensions between moderate Iranian leaders, like Rouhani, and more hardline conservatives—including the country’s Supreme Leader Ali Khameini. “All of this scares people off,” says Amir-Aslani.

Once in, the problems are legion. Business dealings in the country are hugely complicated, says Amir-Aslani, who is frequently in Iran. There is an almost complete absence of independent intelligence about Iranian companies, as well as a lack of banking facilities for financing, and widespread corruption. “It is not exactly Belgium or Denmark,” he says. “This is a country that has been cut off from the world for 40 years.”

That deep freeze has just begun to thaw with the Europeans. Meanwhile, U.S.-Iranian trade relations remain largely frozen in place.