Why Trump Will Still Dominate the Republican Debate 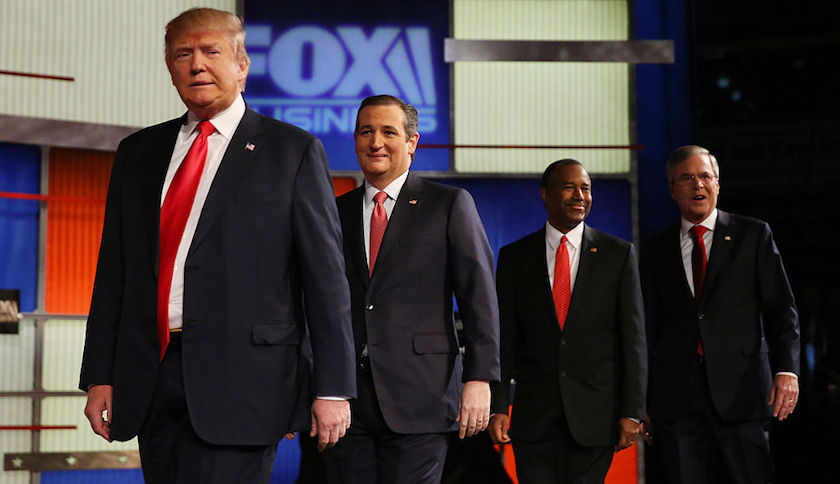 Even off the stage, Donald Trump will cast a long shadow over the final GOP debate before voters begin to cast their preference for the next president.

Trump will hold a “Special Event to Benefit Veterans Organizations,” at nearby Drake University instead of appearing onstage in Des Moines, his campaign said Wednesday, but his presence will still be felt on stage.

Boycotting the debate amid a feud with Fox News host Megyn Kelly, Trump’s lead in the polls, eccentric positions and litany of attacks will still be there.

For his rivals, it’s a long-awaited moment to get their message across without the bombastic front-runner, but also an unpredictable opportunity as they remain locked in their own wars to be the best Trump alternative.

The candidate with the most to lose from Trump’s decision is the man who is caught in a heated battle with him for first place in Iowa: Ted Cruz.

The firebrand Texas senator had hoped to use the opportunity to lambaste Trump for his shifting positions on an array of conservative issues—particularly abortion, as he seeks to hold onto deeply conservative voters. Now he will be on the defensive, forced to fend of a sea of hungry rivals looking to eat into his lead, without his greatest challenger on stage.

Cruz sought to mitigate some of the damage by challenging Trump to debate “mano-a-mano,” an offer Trump has thus far refused. (Cruz’s super PAC announced Wednesday that it is pledging $1.5 million to veterans groups if Trump reconsiders.)

Even though I beat him in the first six debates, especially the last one, Ted Cruz wants to debate me again. Can we do it in Canada?

For Trump, the decision to skip the debate is a high-risk gamble depriving him of a high-profile platform to make his closing case to caucus-goers in Iowa. He’s betting that the announcement will only burnish his go-it-his-own-way credentials. But it will also allow Trump’s rivals to beat up on him without the deterrent that has protected him over the first six debates—Trump’s unmatched ability to counter-punch on stage.

Cruz is not the only candidate anxious about additional incoming from the other candidates. Florida Sen. Marco Rubio will face a host of candidates who see his rise in Iowa as an obstacle to theirs in New Hampshire.

“It probably means the target on our back just got a little bit bigger, but at the same time it means that we’re going to have a lot more opportunity for Marco to get his message out,” said Rubio adviser Todd Harris.

Meanwhile, former Florida Gov. Jeb Bush’s campaign is celebrating the news as an opportunity for their wonkish candidate to make his case without Trump on stage.

“It gives us more time at the microphone and more time to talk about answers to substantive issues that Iowa voters are demanding right now,” said David Kochel, a senior adviser to Jeb Bush’s campaign. “I think as you approach these voters in Iowa, New Hampshire and South Carolina, the campaign needs to be more serious and needs to be about things people care about. As the nomination gets turned over from the pundits to voters I think the voters want to hear from leaders who have accomplishment and records and results and they want to hear about that.”

Retired neurosurgeon Ben Carson and Kentucky Sen. Rand Paul will seek to use the Trump-less debate as an opportunity to reignite the support of their fading coalitions, with the former hoping for more speaking time and the latter lavishing in his return to the main stage. With small, but loyal constituencies, they are looking to win over some more converts in the final stretch.

For the three governors, Bush, New Jersey Gov. Chris Christie and Ohio Gov. John Kasich, the debate is their first step toward trying to force a breakout moment before their showdown in the Granite State, but will be far less consequential than the Feb. 6 contest there 72 hours before polls close.