How A Huge Dairy Is Solving A Major Pollution Problem 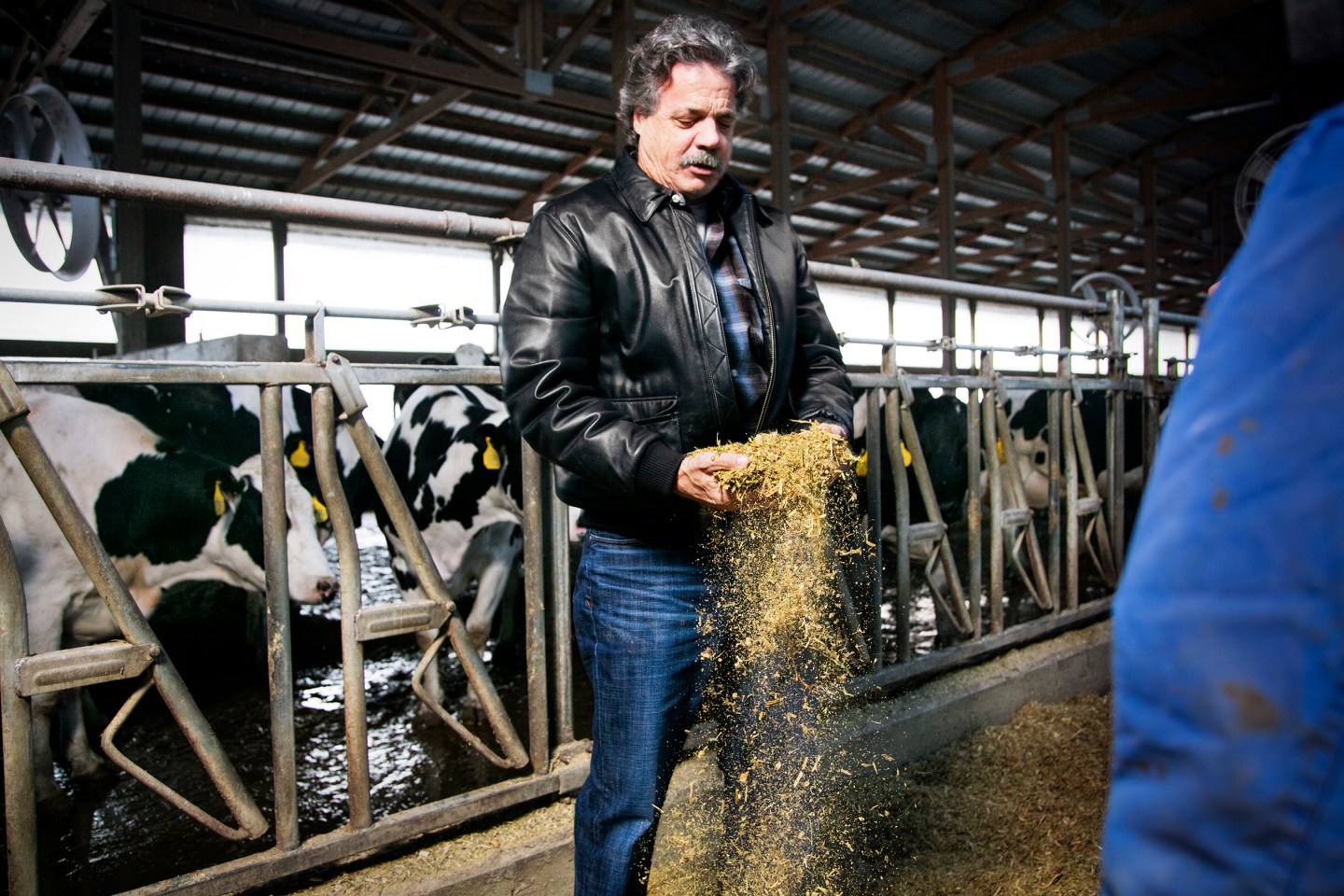 Photograph by Ryan Donnell for Fortune

Though city dwellers may not realize it, agriculture is a big source of carbon emissions. That’s because of livestock’s production of methane, how manure is handled, and soil management (something as simple as tilling the soil releases greenhouse gases). Dairy geniuses Mike and Sue McCloskey, partners in one of the country’s biggest dairy operations, have come up with an elegant approach to tackling several of these problems at once in the hopes of creating a zero-carbon footprint dairy farm. At the heart of the operation: a process that turns their dairies’ tons of cow manure into natural-gas fuel. Here’s how it works.

Mike McCloskey, the co-founder of Fair Oaks Farms in Indiana and the mastermind of the stool-to-fuel project, with his cows. Politico once described him as “the closest thing to a rock star in the industry.”

A worker puts out feed for some of the 36,000 cows that live on the 12 family-run dairies that make up Fair Oaks. The McCloskeys and a partner own half of Fair Oaks’ farms.

Milking is done on a rotary system, which the McCloskeys believe is more efficient and less disruptive for the cows. An electronic tag identifies each cow, and her milk is measured as it flows and then compared to the average of the last five milkings. Big discrepancies in the amounts can help indicate if the cows are sick.

The cows’ stalls are designed so the cows can only defecate and urinate in confined alleyways. The set- up keeps their sand bedding (and in turn their udders) clean and makes it easier for workers to collect the manure.

The manure is collected three times a day when the cows leave their quarters to be milked. The manure is then taken to the farm’s anaerobic digesters.

Inside the control room for one of digesters. The manure spends 21 days in the digesters, replicating the process that takes place inside a cow’s stomach.

The pipe that collects the biogas created during the digestion process. Some of the biogas, which is 60% methane, is used to power the farm, including the digesters.

The rest of the biogas is “cleaned” by this system to 99% methane, which is the renewable natural gas that runs the farm’s fleet of trucks.

A flare burns off any excess biogas so it’s not emitted into the atmosphere.

Fair Oaks’ trucks fill up at the farm’s compressed natural gas (CNG) filling station. The fleet of 42 trucks all run on the farm’s CNG and travel 24/7 to tally an average of 270,000 miles a year—an unheard of distance in the trucking industry.

The slop that’s left over after the digestion process. It’s rich in nitrogen and phosphorus, which are great nutrients for the soil.

Water is then pressed out of the slop to make this denser paste. The paste will go to a fertilizer plant that’s being built on site by a third party. Some of the resulting fertilizer will make its way back onto the fields that grow feed for the cows.

Before the team figured out how to press the water out of the slop, the leftovers would go into the farm’s lagoon. The solids would settle at the bottom, allowing workers to drag-line it and use it as fertilizer. The process was extremely inefficient and costly.

The McCloskeys want to run this tea-colored water that’s pressed out of the slop through an artificial wetlands where they’ll grow something like high-protein duckweed to feed the cows. Their dream is to distill the potable water that will be filtered through the wetlands and use it to brew beer called—of course—Shitty Beer.

Fair Oaks has opened itself up to the public to help consumers better understand where their food comes from. Half a million people visit Fair Oaks every year to see a working farm in action.

Inside the café at Fair Oaks. Some of the milk from the dairy is used to make cheese, yogurt, and ice cream, which can be purchased on site.

The cows go to market once they are about six or seven years old. Since they are the ideal breed for producing milk and not necessarily for high-end meat cuts, they end up primarily supplying the fast food industry. Fair Oaks also has certain cows bred for meat, which is served in the recently opened Farmhouse restaurant.