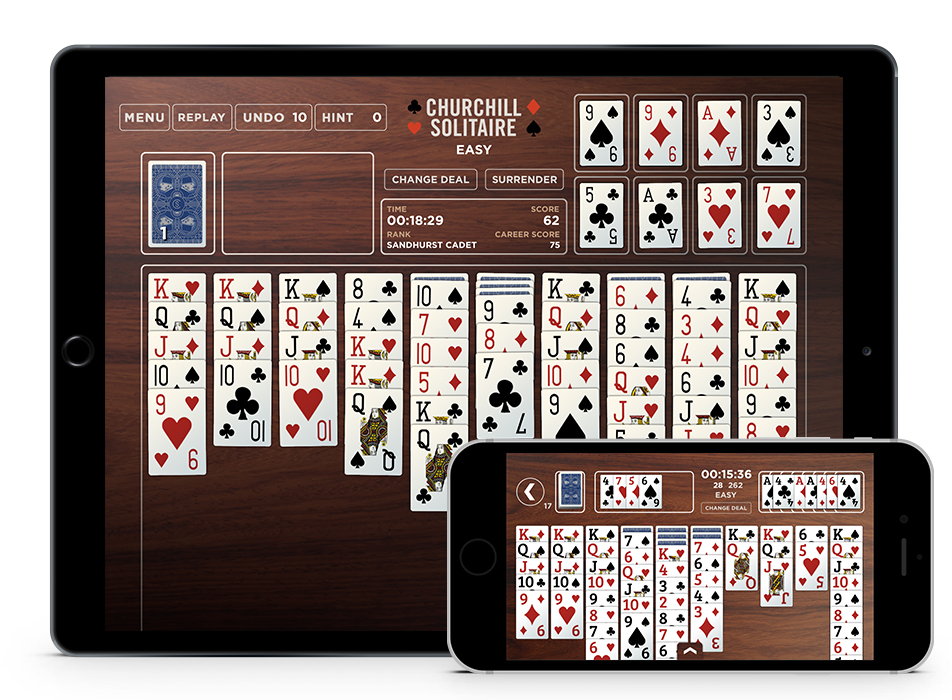 Donald Rumsfeld has served three Republican presidential administrations, survived two turns as Secretary of Defense, and represented the United States as ambassador to NATO. Now, at 83, he’s still adding bullet points to his resume. Rumsfeld and a team of developers have released an iOS app that the former SecDef describes as “an incredibly devilish version of solitaire” invented by none other than Sir Winston Churchill, Britain’s most revered prime minister.

Churchill Solitaire was—according to the story related by Rumsfeld in a post on Medium—devised by Churchill as a means to pass the time and hone the mind during sleepless wartime nights. Similar to conventional solitaire, Churchill’s version uses two decks instead of one and includes a particularly difficult twist—an additional row of six cards known as the Devil’s Six that the player must clear alongside the usual stacks of suited, ordered cards.

Rumsfeld learned the game from a senior Belgian diplomat named André de Staercke while he was serving as ambassador to NATO in Brussels in the 1970s. During the war, de Staercke had been something of a protégé to Churchill while serving as part of Belgium’s government-in-exile in London. Churchill taught de Staercke his card game, and de Staercke later passed it on to Rumsfeld.

“Up until a few years ago, there were probably a dozen or so people in the entire world who knew how to play this game,” Rumsfeld writes. His wife Joyce, his kids, a handful of members of the Belgian diplomatic corps, and a few of Rumsfeld’s colleagues made up the entire universe of Churchill Solitaire players (de Staercke passed away in 2001). The app, Rumsfeld says, is a way to share Churchill’s more “demanding and complex” version of solitaire with the world before it was lost to history.

For more on mobile gaming, watch this Fortune video:

Admitting he knows next to nothing about apps, Rumsfeld teamed with a group of app developers and helped guide them through the engineering via dictated memos (“Instead of capturing history, it is getting a bit artsy,” he said in one exemplary missive, according to the WSJ.) Though not so much helpful with the coding, Rumsfeld played an active role in shaping the look and feel of the game. “I’ve signed off on something they call ‘UX,’” Rumsfeld writes on Medium. “I’ve put the game through its paces, offering suggestions and ideas to make it as closely resemble the game Churchill played.”

Thusly, the former aide to Nixon, ambassador to NATO, and architect of two major modern military campaigns has made the transition to mobile app developer, if not mobile app tycoon. Both Rumsfeld and the Churchill family—which blessed the endeavor—will donate any profits made from the game to charity, he says.