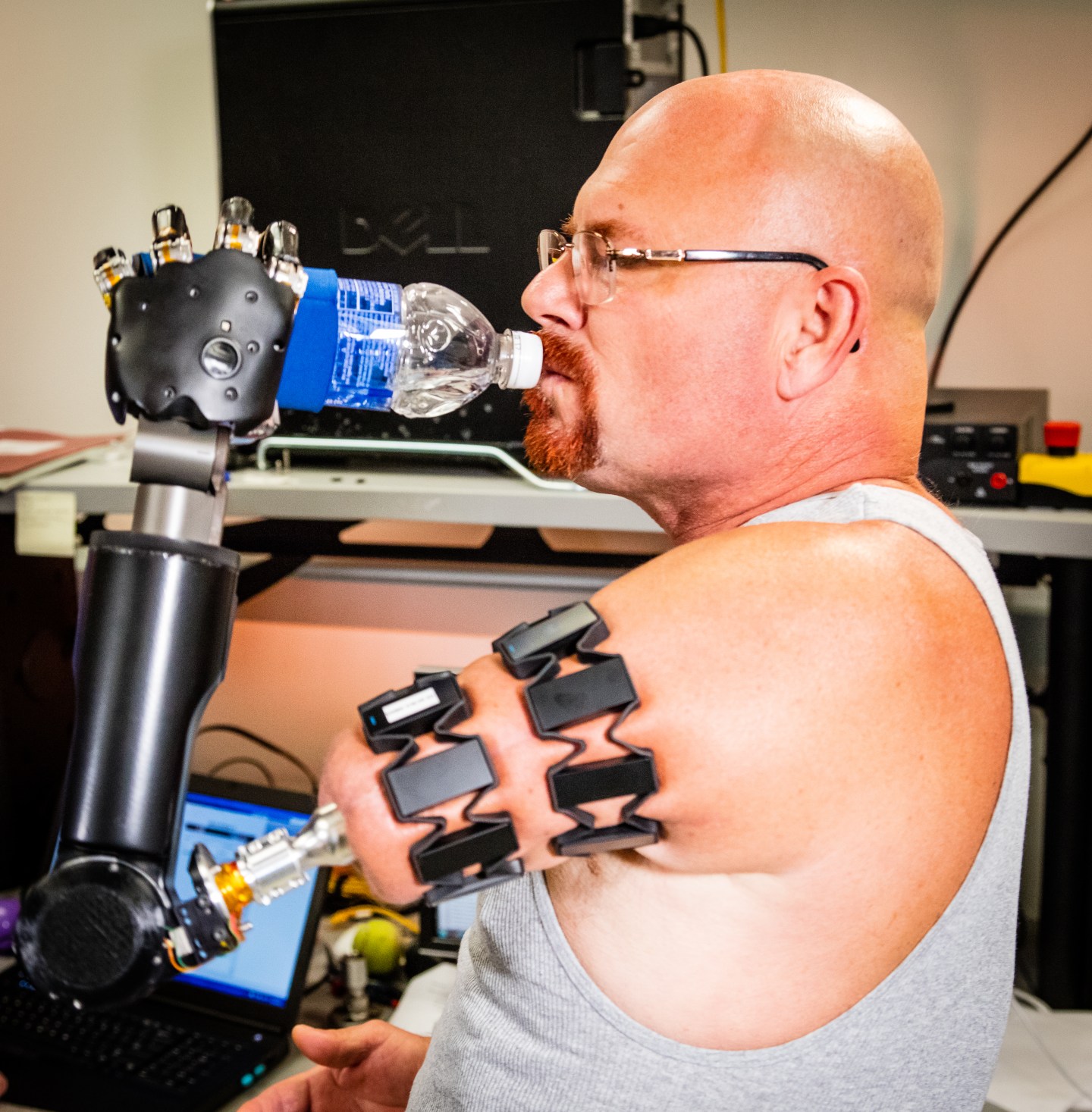 Johnny Metheny lost his arm to cancer in 2008. He then underwent procedures to reroute nerves in the remainder of his stump and to attach a metal socket directly to his arm bone. Now, as a research participant in the Johns Hopkins Applied Physics Lab, he’s the operator of one of the most advanced and dexterous prosthetic arms in the world, controlled by signals from his remaining muscles.

It’s a life-changing advance funded by tens of millions of dollars, provided in part by the Department of Defense’s research arm, the Defense Advanced Research Projects Agency. But perhaps the most amazing thing about the system is that at its heart is a gadget you can buy for $160 online.

You can see Metheny and his prosthetic in action in this video. Around his upper arm, you’ll see that device, the Myo armband:

The Myo, developed by Thalmic Labs, detects bioelectrical pulses from muscles and translates them into digital signals readable by computers—in this case, the computer driving Metheny’s uncannily fine-tuned bionic arm. But the Myo was never intended for medical applications. Thalmic conceived it primarily as a new way of surfing the web or controlling virtual reality games—and that’s still its primary target market.

Stephen Lake, Thalmic’s CEO, says inquiries started to come quickly from parties interested in applying the technology in a variety of industries. But Thalmic decided against in-house development of all those possible applications.

“We made the decision very early on to open the technology up and make it available to developers,” says Lake. Johns Hopkins researchers came across the device on their own, and when they first approached Myo for help, they didn’t even tell the company what they were working on. Lake says the Thalmic team didn’t see Metheny’s arm in action until a few months ago.

Data is the newest weapon in the fight against cancer; watch:

The Johns Hopkins team did have to make some adjustments for the Myo’s new application. Because the upper arm has fewer fine muscles than the forearm, where the Myo is normally worn, Metheny wears two of the bands, which capture better data when combined.

The bionic arm application is in some ways baked in to Myo’s genesis. The device’s name is derived from “myoelectric,” the term for the electrical signals our bodies use to control muscles. Myoelectrics have long been an area of research in bionic controls, but Lake says that many myoelectric control devices require either surgical sensor implants or conductive gels spread over a patient’s skin.

“They’re not something you can practically use outside of a laboratory,” says Lake.

The Myo also, as seeing Metheny in action makes clear, provides much finer control than the “mind control” demonstrated using either EEG skullcaps or electrode implants.

Metheny’s bionic arm might trigger a bit of resentment toward your own soft, fleshy extremities. But you can experience something nearly as cool without staging a horrific accident: The Myo can also control BB-8.