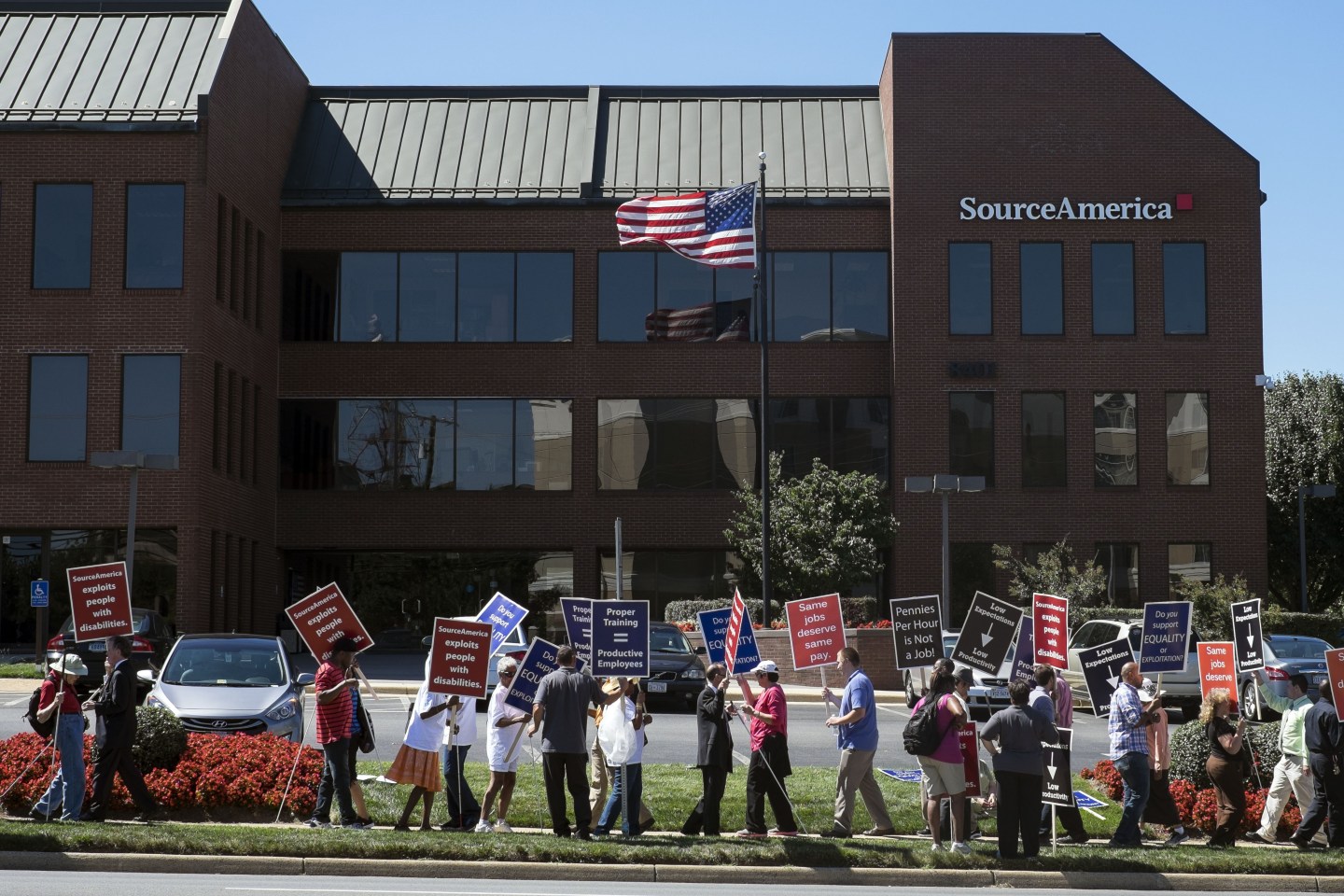 Members of the National Federation of the Blind and other advocacy groups for the disabled demonstrate outside SourceAmerica headquarters in Vienna, Virginia, U.S., on Thursday, Aug. 28, 2014. The protesting groups claim SourceAmerica discriminates against workers with disabilities by permitting its qualified nonprofits to pay them less than the federal minimum wage. Photographer: Pete Marovich/Bloomberg via Getty Images
Photograph by Pete Marovich — Bloomberg via Getty Images

Federal officials have reportedly opened an investigation into AbilityOne, a tax-funded program that provides disabled people with employment opportunities.

The part of the program that’s under scrutiny is SourceAmerica, CNN reports. SourceAmerica is a nonprofit created by AbilityOne to serve as an administrative agency and manage contracts between the program and outside companies. Authorities are investigating the organization for financial fraud and corruption in what CNN’s sources say “could be the biggest fraud case ever in a U.S. government agency.”

Several sources have told the news outlet that SoureAmerica’s methods of awarding contracts are unfair, accusing the organization of giving preference to companies connected to the agency.

One lawsuit, among several, filed by Ruben Lopez of Bona Fides Conglomerate accused SourceAmerica of terminating its contract with Lopez so that it could instead award it to a company associated with one of the organization’s board members. SourceAmerica settled the lawsuit by agreeing to treat Lopez’s company fairly moving forward. However, Bona Fide never received another contract, and Lopez again sued SourceAmerica. The lawsuit is ongoing.

Appalled by the agency’s practices, Lopez began working with federal investigators and secretly recorded his conversations with Jean Robinson, SourceAmerica’s lawyer. In the recordings, posted on WikiLeaks in November, Robinson talks about corruption within the agency. “We are dealing with the mafia here, the old – the old SourceAmerica mafia,” she’s heard saying. She says this is how they’ve been conducting business for 25 years and “they’re not going to stop.”

SourceAmerica said in a statement to Fortune that these allegations are being made by “disgruntled nonprofits and individuals,” adding that the tape recordings between Lopez and Robinson are “factually inaccurate and untrue.”