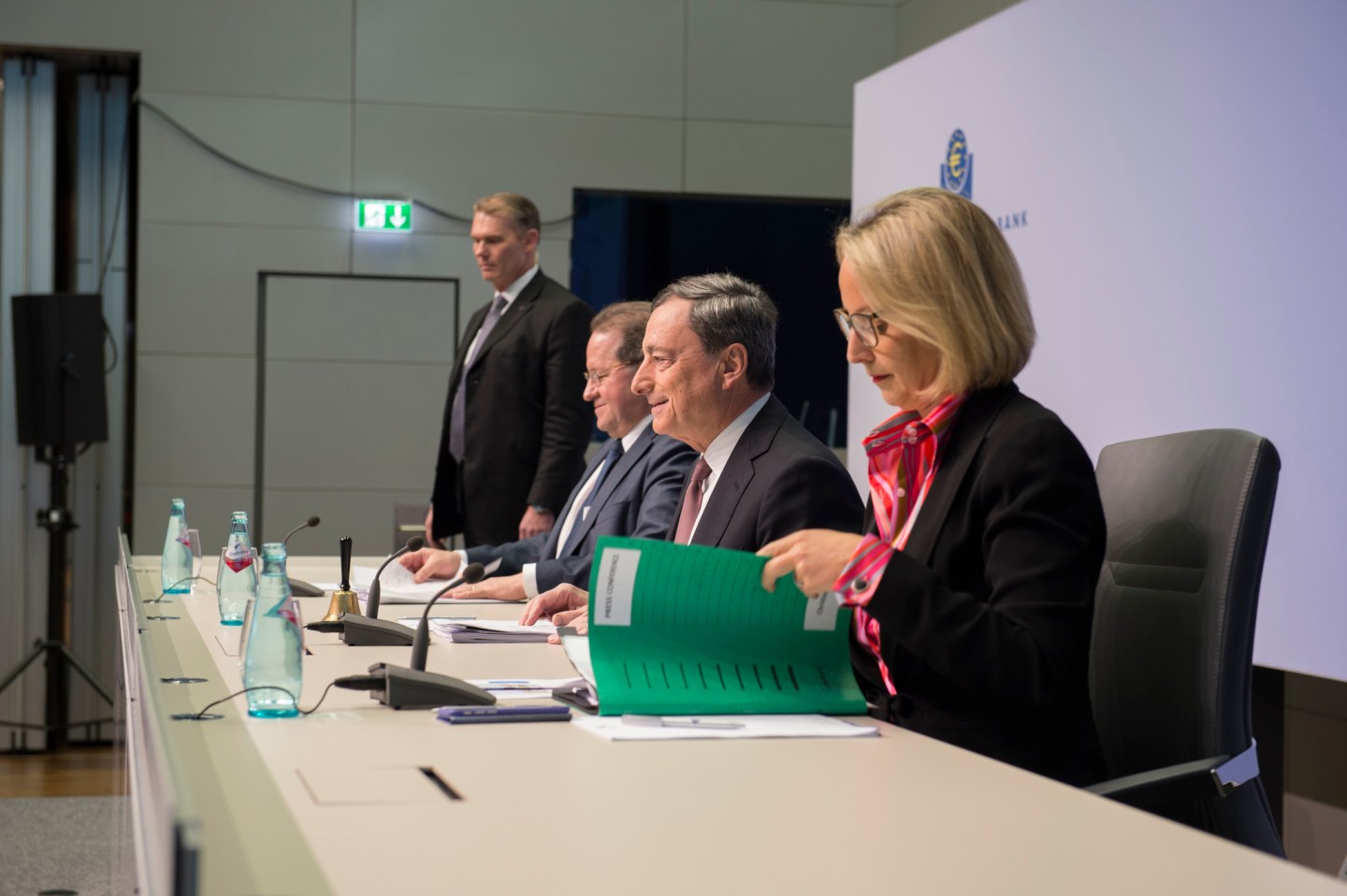 “It will be necessary to review and possibly reconsider our monetary policy stance at our next meeting in early March.” —Mario Draghi, ECB President, January 21, 2016.

One of the problems with being a central banker is that markets can go haywire at pretty much any time, and yet you only have a small number of opportunities every year to do something concrete about it. For the rest of the time, you have to hone your skills at talking self-harming traders and investors down from whatever window ledge they’ve perched on.

European Central Bank President Mario Draghi has made this particular act his signature skill since taking over in 2011, and that was the game again Thursday when he all but pre-announced another round of monetary stimulus when the ECB’s governing council next meets in March.

Of course, if you parse the comments at his press conference, you’ll see that he left himself enough wiggle room for doing nothing if, by some miracle, the outlook for the world economy brightens massively in the meantime. But the chance of that happening is minimal. As Draghi pointed out, oil prices have fallen 40% since the ECB did its last round of economic forecasting, most other commodity prices have followed suit, and the risk of them kicking off a destructive and deflationary spiral, where wages and prices chase each other lower, has unmistakably risen.

But if the issue is that clear, why didn’t he do anything today? There is only one reason, and it’s that the ECB had already increased its stimulus measures at its last meeting, albeit only marginally. To have done so again immediately would have given the appearance of panic, of loss of control, and it would only have encouraged more of the volatility that the ECB, like any responsible central bank, wants to discourage.

“There should be no doubt [about the ECB’s] power, willingness and determination to act” to get inflation up to its targeted level of just under 2%, Draghi said, adding—in a phrase with conscious echoes of his famous ‘whatever it takes’ pledge in 2012—that “there are no limits to how far we can deploy our instruments, within our mandate.”

So there you have it: a pretty firm promise to loosen monetary policy further, at a time when the ECB is already charging 0.3% for banks to deposit their surplus funds (€216 billion as of last week), has a benchmark rate of 0.05%, and has driven market interest rates down to a level where many of the Eurozone’s banks can’t earn enough on their loan portfolios to pay their bills (almost running out of bonds to buy in the process). Too bad, said Super Mario.

Three weeks into 2016, a pattern is emerging: China’s slowdown is going to forestall any attempt by major Western central banks this year to exit from the extraordinary policies that have supported the economy since 2009. Markets are already implying that the Federal Reserve will raise rates, at most, another two times this year, rather than the three signaled by Fed board members in December.

Bank of England Governor Mark Carney had already beaten Draghi by two days at switching into dovish mode. Having previously guided markets to expect the first U.K. rate rise around the turn of the year, he said in a speech Tuesday that “now is not the time.” The pound, one of few currencies to broadly keep step with the dollar last year, promptly hit a new seven-year low.

Draghi, too, succeeded in talking the euro down by the best part of a cent against the dollar Thursday, although on a trade-weighted basis, the currency is still close to a six-month high, thanks to the declines in many emerging market currencies in that time.

But how long that effect will last is another question. Draghi’s credibility took a hit in December when he big-talked a raft of measures that added up to very little in reality. That communications failure sparked some corrosive talk about how central banks had come to their end of their powers to keep Western capitalism going. It might not take too many “ifs and buts” in Deutsche Bundesbank President Jens Weidmann’s next speech to cast doubt over at least one element of the ECB’s “power, willingness and determination” to do any more.