This Little-Known Company Is Becoming A Craft Beer Powerhouse 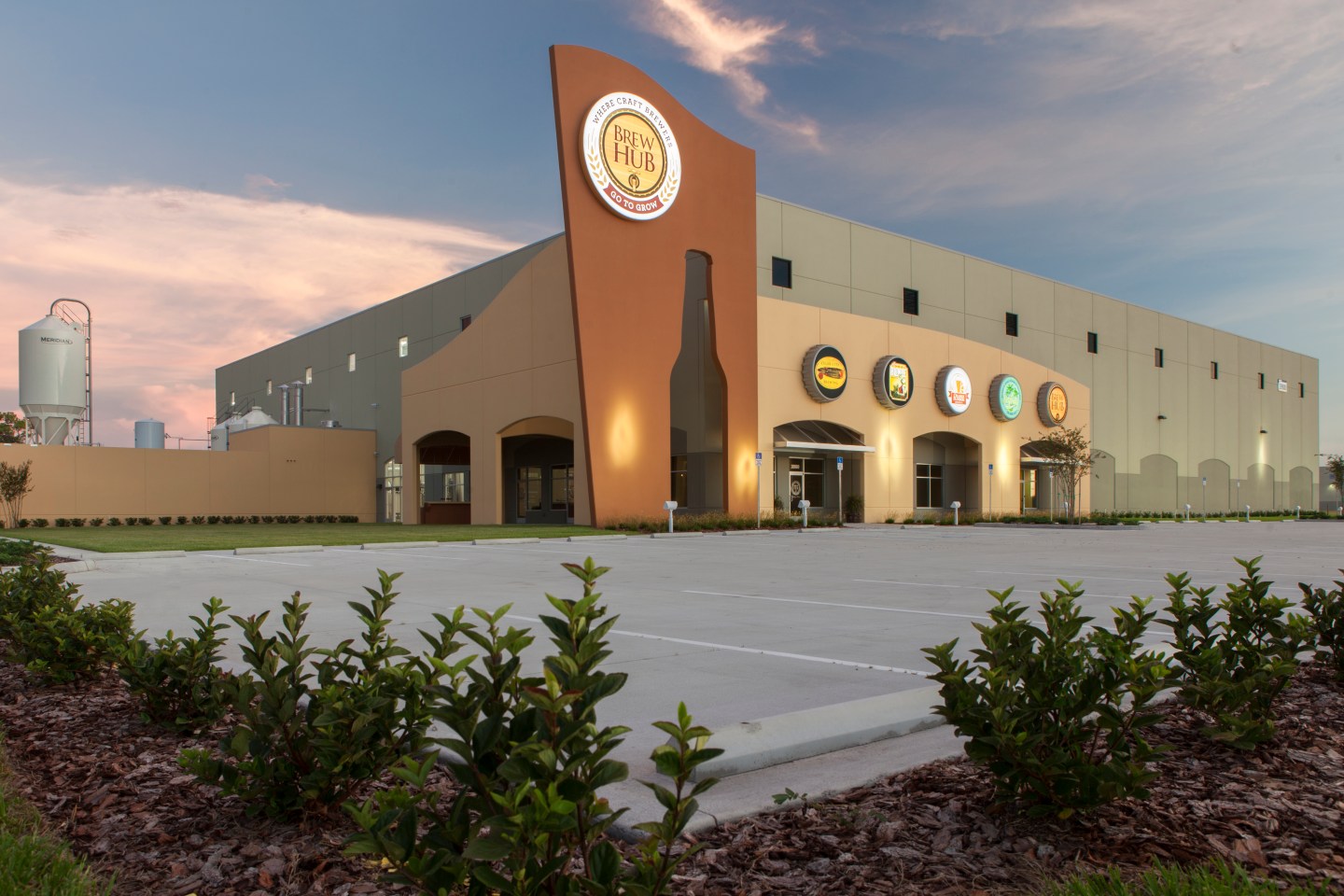 Cigar City’s Jai Alai IPA and Toppling Goliath’s Pseudo Sue are two beers that, unless you live near their brewery of origin, can be pretty hard to get your hands on. But if it wasn’t for Brew Hub, a little-known factory in Lakeland, FL, it would be a whole lot harder.

Brew Hub’s founders saw a hole in the craft brewing world five years ago and quickly moved to fill it, building a production facility to help popular small brewers increase their capacity without having to make the capital investment in equipment.

At the time it was a risky gamble, given how protective brewers can be of their product to ensure consistency. But since opening the 64,000 square foot facility in Lakeland in August, 2014, Brew Hub has lured some of the most sought after names in beer – including Tampa’s Cigar City, Iowa’s Toppling Goliath, and Asheville, NC’s Green Man Brewery – by becoming more of a partner than a vendor.

“Their logo is on the side of our building,” says Tim Schoen, CEO of Brew Hub. “In our tasting room, our taste masters talk about each of their beers. We know as much about their beers as they do. It’s our brand as much as its theirs.”

Signing those companies was no easy task, but it helps that Brew Hub has had some of the brewing world’s big guns on its staff. Paul Farnsworth, the former co-owner of Pedernales Brewing and a veteran of Four Peaks, was the company’s initial chief brewer. Today that role is filled by Jim “Otto” Ottolini, former brewmaster at Schlafly Beer.

A partnership with Brew Hub is an arrangement that can dramatically expand a brewer’s capabilities. Toppling Goliath, for example, went from 3,300 barrels to over 15,000 by working with the company.

Brew Hub started with the capacity to brew 60,000 barrels per year – and partners quickly grabbed all of that available production. An expansion is currently underway to increase capacity to 100,000 barrels – and that, too is nearly sold out, says Schoen. (Expect additional expansions in the years to come. The facility’s maximum capacity is 250,000 barrels. “We’ve got a lot of run room left in Lakeland,” says Schoen.)

More brewer partners at the Lakeland facility have been signed, but not yet announced. And later this year, Brew Hub hopes to break ground on a second location in Chesterfield, MO – a western suburb of St. Louis – which will expand its capacity by another 75,000 barrels when it opens in early 2017. And its long-term plans call for facilities in the Northeast, Northwest, Southwest and Texas. (Schoen hints that some of the expansion could come through the purchase of existing brewery locations – and says the company nearly did two deals in the past 18 months, but neither came to fruition.)

The staggered locations do more than attract regional breweries. They give current partners an opportunity to expand. While stopping short of naming any brewers, Schoen says some of the Lakeland partner brewers are planning to brew in Chesterfield as well and may launch distribution there as well.

By brewing regionally at Brew Hub facilities, beer makers can reduce their transportation costs and still expand their footprint to new areas. They’re also able to ensure that consumers get fresh beer quicker, which is critical with some styles.

To assist with that, Brew Hub is testing an optional distribution program for its partners, handling the management, analytics and pricing of the beers, though only as its representative. The brewer owns the relationship with the distributor and can take over at any time. (Green Man Brewing, for instance, is using this model to expand into Florida.)

Just as importantly, though, Brew Hub frees brewers from the burden of keeping up with the demand of their hot flagship brew and lets them focus on new creations. Cigar City, for instance, can conceivably make more Hunahpu, and Toppling Goliath has more capacity to explore the sour program owner Clark Lewey was forced to slow down over the last two years.

“In 2016 and beyond, I’ll really be excited to be kicking around some new ideas,” Lewey told Fortune last year. “Yes, you want to pay the bills, but there’s this drive in me that I feel we’ve just scratched the surface of what Toppling Goliath can create.”

Curious about the beers Brew Hub makes for partners (and itself)? Here are our impressions of a few.

Cigar City Jai Alai – This is a beer that lives up to its reputation. While it’s very hoppy on the nose and up front, it mellows quickly with strong mango elements and caramel. It’s a masterful take on the style that even a non-IPA lover will appreciate. (ABV: 7.5%)

Green Man Brewing IPA – This English-style IPA foregoes fruits and instead leans in a more earthy direction. It’s a creamy, medium bodied offering that is both hoppy and malty and has an assertive, but not overpowering, bitterness. (ABV: 6.2%)

Toppling Goliath Golden Nugget – Pseudo Sue gets all the love, but don’t overlook this other Toppling Goliath IPA. Loaded with grapefruit, orange and other fruity notes, it’s a highly drinkable offering. It’s a bit more bitter than some might expect, but not enough to turn you off of the beer. (ABV: 6%)

Keybilly Island Ale – This is the beer Jimmy Buffett should have made. Slightly sweet, but loaded with the key lime tartness, this beer came from a partnership between Brew Hub and a home brewer (Pat Kennedy) who steadfastly lobbied the company. The lime is balanced just right so it doesn’t overwhelm the malt in the beer, putting this right on the edge of being a desert beer. (ABV: 5.4%)