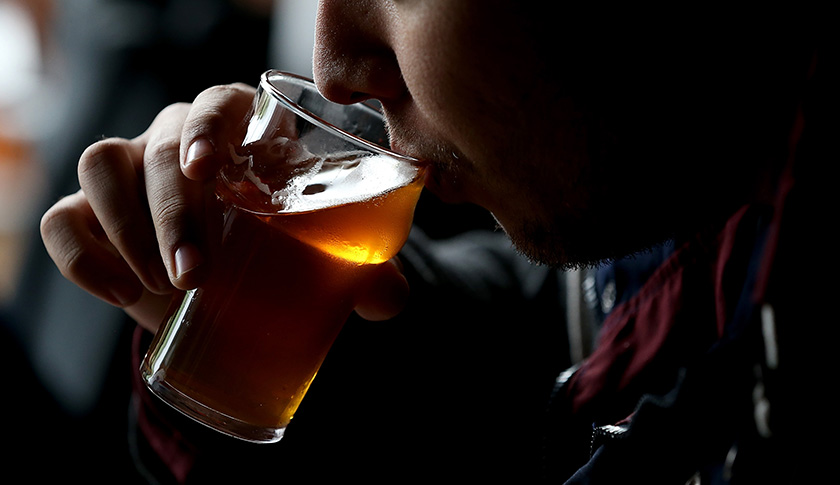 SANTA ROSA, CA - FEBRUARY 07: A Russian River Brewing Company customer takes a sip of the newly released Pliny the Younger triple IPA beer on February 7, 2014 in Santa Rosa, California. Hundreds of people lined up hours before the opening of Russian River Brewing Co. to taste the 10th annual release of the wildly popular Pliny the Younger triple IPA beer that will only be available on tap from February 7th through February 20th. Craft beer aficionados rank Pliny the Younger as one of the top beers in the world. The craft beer sector of the beverage industry has grown from being a niche market into a fast growing 12 billion dollar business, as global breweries continue to purchase smaller regional craft breweries such this weekÕs purchase of New YorkÕs Blue Point Brewing by AB Inbev. (Photo by Justin Sullivan/Getty Images)
Photograph by Justin Sullivan — Getty Images

You’ve got to get up pretty early in the morning if you want a can of Second Fiddle Double IPA. And if you want a glass of Pliny the Younger, you may just want to forego sleep altogether.

Roughly every two weeks, Matt Cohen, owner and brewmaster of Fiddlehead Brewing, sells cans of Second Fiddle from his Vermont brewery. It’s one of the biggest up and coming beers in the craft scene today – and is increasingly being sought by beer lovers.

Four hundred cases are sold when the doors open – and they typically go within an hour. Fans begin to line up two or more hours before the brewery begins operations just for the chance of picking up a case.

Across the country at Russian River Brewing, the release of Pliny the Younger is a once a year event – and the fervor to get just a glass of that (it’s not sold in bottles) is even more frenetic. The night before the beer is first tapped, fans begin camping out 12-18 hours before it’s available.

This week marks American Craft Beer Week, which means from May 11-17, bars and restaurants will shine the spotlight on smaller breweries brighter than overs Beer festivals will be pouring across the country. (Find the events in your area here.)

That’s good for craft brewers and craft lovers, but it’s certainly going to make it harder to find the most highly rated beers. And that’s a blessing – and a curse – for the breweries that make them.

“It’s a little bit of both,” says Jen Kimmich, co-owner of The Alchemist, maker of Heady Topper, which is currently the top ranked beer in the country. “We have stability here and that enables us to give our employees stability in their lives, but at the same time, people always ask us ‘Will you ever be able to meet demand?’ and that’s a question we can never answer- because what is demand? Regional? National?”

Heady Topper got so popular that The Alchemist had to shut its doors to the public. It makes 9,000 barrels of the popular IPA per year, but that’s still not enough for fans. The brewery is in the process of building a second location, which will open next year and include a visitor center. It will also allow the brewery to distribute two new beers – Focal Banger, an American IP made with citra and mosaic hops, and Beelzebub, an American style stout.

Heady Topper’s rise to fame was a slow burn. (The beer was first made in 2004.) At Toppling Goliath Brewing Co., it has been a much faster pace. The brewery opened in 2009, but boasts two of the Top 10 beers in the country, according to Beer Advocate – and five of the top 26.

Like Kimmich, owner Clark Lewey says he’s enjoying the ride, but the demand for certain beers – pseudoSue is especially popular of late – has forced the brewery to focus on producing as much of those as it can, at the expense of trying something new.

“With some of our core brands, there’s so much demand and we have to make so much that it has taken away from my creative time,” he says. “It really saddened me in 2014 and 2015 as I had to slow our barrel aged program down.”

He’s hopeful that a new partnership to brew pseudoSue offsite will allow Toppling Goliath to expand its offerings over the next year.

A breakthrough beer can put a brewery on the map – and often provides a constant, steady stream of income for the founders. But veterans caution that the laws of thermal physics still generally apply to the beer industry. What’s red hot now may cool quickly – and brewery owners need to be prepared for that.

“[Second Fiddle] has definitely drawn a lot of attention to most everything we do,” says Fiddlehead owner and brewer Matt Cohen, who has been in the beer business for more than 15 years. “I think it’s a blessing. The only way I see it becoming a curse is if you let this current success give you false expectations of the future of your company. A lot of other brewery owners are growing at a tremendous pace – and I’m a little more realistic. I realize these are great times, but I’ve been around long enough to see the downtimes. So I still try to grow very slowly and methodically.”

Planning on celebrating craft beer week? This is a good time to try one of the top beers – as ranked by Beer Advocate or RateBeer. Below, you’ll find our thoughts on a few of the favorites.

This DIPA urges you to drink it out of the can - something that's likely to be foreign to most craft beer drinkers. Do what it says. While it's fine in a glass, drinking from the can lets you inhale additional hops before the beer hits your tongue, prepping your palate for what's to come - an explosion of citrus and hoppy bitterness But it's one of the most well-balanced beers you'll come across and has a perfectly clean finish. Best beer in America? That's a personal choice. But it's certainly a great one. (ABV: 8%)

Currently ranked as the fifth best beer in the country, this imperial stout is aged in bourbon barrels that were previously used to age Michigan syrup. It's a well-balanced, creamy concoction that incorporates chocolate and coffee - but it’s not as sweet as you might expect. Resist the urge to drink it quickly. Instead, let it warm up a bit and you'll find it offers an explosive flavor profile. (10.6% ABV)

An excellent example of a Vermont IPA, this is a nice, full-bodied beer that boasts plenty of citrus and earthy tones with a very smooth bitterness that fades at the finish. It's incredible tasting when cold, but - in a rarity for an IPA - it's still delicious if it gets to room temperature (though odds are you won't be able to resist it long enough to discover that for yourself). (ABV: 8.1%)

An absolutely fantastic blend of citrus, pine and spice, this California IPA has a hoppy tang to it that's incredibly fresh. The flavors hit one at a time, resulting in a very layered beer that's quite refreshing. It finishes with a creamy hint of bitterness that leaves you wanting more. (ABV: 7.25%)

This is two different beers, depending on whether you let it warm or not. Drink it cold and you're hit with dark chocolate followed by an espresso finish, all tempered with a sweet malty taste. Let it warm up a bit, though, and the coffee takes over, though the sweetness of the malt is prominent at the finish. What's most impressive, though, is how smooth the beer is, given its incredibly high level of alcohol. (ABV: 11.5%)